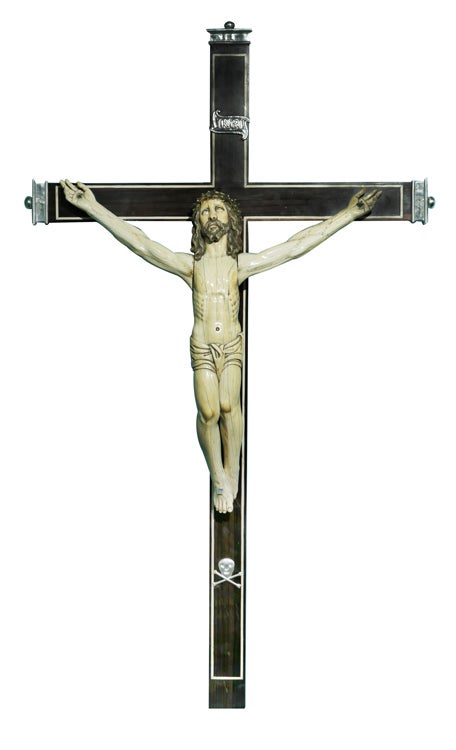 Fernando Amorsolo’s 1961 portrait of Susan Magalona, the legendary beauty and society figure who defined the standards of beauty and class during her time, will be auctioned off by León Gallery as part of its Asian Cultural Council (ACC) Philippines Art Auction on March 3.

Also to be bidded out is the largest ivory crucifix in the Philippines, a 17th-century icon said to have been made in the Chinese Parian of Manila and now repatriated to the Philippines from a private collection in Spain.

A Negrense, Magalona was the sister of actor Pancho Magalona. She was crowned a teenage beauty princess in the 1930s and became celebrated for her beauty and style. Her marriage to Carlos Ledesma was annulled and she later married diplomat Joaquin Miguel Elizalde. Pre- and postwar high society considered her the “It” girl, “our version of Helen of Troy,” according to the León catalogue.

Provenance of the painting is “from the artist himself.” Bidding starts at P1.2 million.

The crucifix is made of ivory, kamagong and silver. The solid ivory body measures 32 inches and should be the largest of its kind now, according to antique expert and social historian Martin Tinio Jr.

The pristine 19th-century Sheraton sideboard, which has just been displayed at the “Curated by Federico de Vera” exhibition at the Ayala Museum, will be auctioned off at P1.8 million.

The top of the sideboard is a single narra plank with a serpentine front, with its edges inlaid with kamagong and bone just like that of the horizontal carcass frame.

Tinio said the Sheraton style of furniture became popular during the second quarter of the 19th century onwards and greatly influenced furniture made in Gapan, Nueva Ecija, and Baliwag, Bulacan.

The two-door comoda from the second quarter of the 19th century, made entirely of kamagong, has a starting price of P1.1 million.

“The comoda, including the back panels and the shelves, was the work of a master craftsman who had to make do with narrow pieces of the wood,” Tinio said. “He joined the pieces in such a way that they seem to be entirely of one piece.

Other sought-after pieces are the chest of drawers with an “escritorio” or fall front desk, made in the mid-19th century in Apalit, Pampanga. It has a starting bid of P400,000.

“Found only in houses whose owners were men of affairs, the chest of drawers was usually found in the cuarto mayor or master bedroom and, thus, served as the repository of important deeds or documents,” Tinio said. “Sometimes, the escritorio was made with secret drawers concealed among the numerous compartments to safeguard valuables and money.”

Aside from the 17th-century ivory crucifix, also an important religious piece is the “Statue of an Unidentified Apostle,” made of ivory and wood, which has a starting price of P800,000.

The image stands on a base beautifully carved in the Mannerist style with strapwork that is typically found in large 17th- and 18th-century Philippine colonial santo.

In contemporary art section, a highlight is Annie Cabigting’s painting “Black (After Ad Reinhardt at the Moma),” part of her series on museumgoers looking at works of art, not passive as they’re usually portrayed in most paintings, but actively engaged. Bidding starts at P3 million.

Marina Cruz’s “Construction Always on Progress” continues the artist’s exploration of the interiors of derelict houses, a deeply personal vision that makes of a tight space a veritable landscape.

Among the modern masters is Alfonso Ossorio, whose 1950 mixed-media work, “Abstract,” is a striking abstract expressionist work. Bidding starts at P2 million.

But perhaps an even more revolutionary work is Ossorio’s 1957 “Untitled,” an ink, gouache, wax and watercolor on paper, which is apparently an announcement of an art show in Southampton in which he spread the text and numerals. The well-designed composition appears a forerunner of conceptual art. Bidding starts at P2 million.

Another important modernist piece is Nena Saguil’s striking abstract “Paris” (1961), with a floor price of P340,000.

This is the third year of partnership between the ACC and León in raising funds to benefit artists and help them take up further studies abroad.