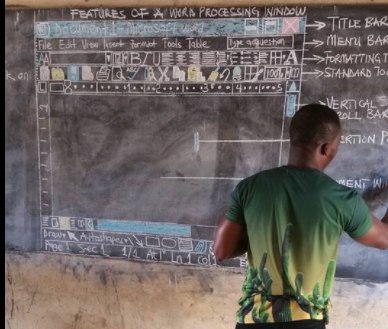 Teacher uses chalkboard to show students how to use ‘Microsoft Word’

While most teachers worry about how to make their lessons more interesting — from various readings to games and animated powerpoint presentations flashed on the screen with a projector — one teacher from Ghana, Africa keeps it old school with the bare minimum: a trusty chalk and blackboard. And for him, it’s all he needs.

Richard Appiah Akoto, Owura Kwadwo Hottish on Facebook, is an information and communications technology teacher in the Betenase M/A Junior High School who became an instant internet sensation when his Facebook post last Feb. 15 went viral and tugged on the heartstrings of people worldwide. His photos show him teaching his students how to use Microsoft Word, but since there is no available computer and projector, he resorted to painstakingly drawing the interface of the word processor on the board.

Kwadwo didn’t let their school’s lack of resources affect the learning of his students. His visual arts background proved to be helpful as he uses his skills to make his teaching fun and creative for his students.

“I do it to make my students understand what I’m teaching,” Akoto told online magazine Bored Panda last Satuday, Feb. 24. “At least to give a picture of what they will see assuming they were behind a computer. I do make sure they understand everything well before they leave the class.”

While a lot of people pointed out the lack of a computer lab in his school as troubling, Akoto still sympathized with the government of Ghana.

“The government is helpful and I believe in them, they are trying to make ICT better for teachers and students,” said Akoto.

Progress may be happening in big cities in Ghana such as Accra, but for rural areas, like in Akoto’s school, progress comes slow. After Akoto’s Facebook post went viral, he has received donations for projectors and laptops to help with his teaching. He also expressed that a lot of schools are experiencing the same hardship, and he wouldn’t mind giving them some of the donations.

Ghana was named one of the fastest growing African economies by Bloomberg in a report last Feb. 12, citing its $45-billion economy as the biggest in sub-Saharan Africa. Progress does seem slow on the surface, but it can be said that efforts to stabilize Ghana’s economy are definitely underway, and citizens like teacher Akoto contribute whatever they can. Cody Cepeda/JB

Yes, teachers are underpaid, even ‘underappreciated’