In Rep’s ‘Silent Sky,’ a pioneer woman astronomer gets her dramatic due | Inquirer Lifestyle ❮ ❯ In Rep’s ‘Silent Sky,’ a pioneer woman astronomer gets her dramatic due 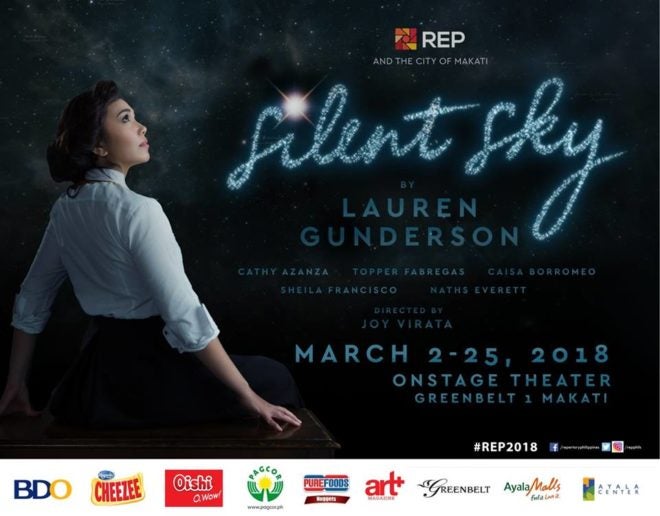 To celebrate Women’s Month, Repertory Philippines is staging Lauren Gunderson’s “Silent Sky” on weekends until March 25 at Onstage Theater in Greenbelt 1. The play puts a spotlight on American astronomer Henrietta Swan Leavitt, a pioneer in her field though obscured in science history because of her gender.

Leavitt’s work includes the staggering discovery of about 2,400 stars, or over half the known stars in Leavitt’s time—a feat considering she and her female colleagues in early 20th-century Harvard College Observatory were barred from using the technology (a refracting telescope which the observatory already had) to make their job easier. She paved the way for other scientists to plot the Earth’s spot in relation to other galaxies, and thus had a hand in advances in the related fields of cosmology and astrophysics.

Leavitt faced gender discrimination in a male-dominated industry, and that was on top of being burdened with family obligations and ill health. She died of cancer at age 53 in 1921; about five years later, the Swedish Academy of Sciences would’ve nominated her for a Nobel Prize in physics—except Nobels cannot be awarded posthumously.

It seems a sad end for a real-life heroine, but not onstage if Gunderson could help it. Leavitt’s story gets the astronomical treatment, so to speak, in the hands of the American playwright, who last year—at just age 35—was declared by a leading industry publication as the “most produced playwright in America.”

It’s easy to see why, a Boston Globe theater critic pointed out. The review described Gunderson as “an adventurous writer who marries playful whimsy with a spirit of intellectual inquiry and engagement with our times… making it her business to give pioneering but insufficiently celebrated women their dramatic due, while transcending the constricted formulas of the biographical drama.”

In other words, a woman giving other women recognition by writing their stories for theater and infusing those stories with intelligence, warmth and humor.

Rep artistic director Joy Virata, who helms the “Silent Sky” production in Manila, was introduced to Gunderson’s deft writing sometime ago through an essay about children’s theater published online. The stage veteran would often quote excerpts from the essay (with Gunderson’s permission) in promoting Rep’s Theater for Young Audiences.

“It’s such a beautiful play,” Virata gushed during a one-on-one interview weeks before the show opened. “If you read the lines and the staging that it calls for… it’s not in regular time, it’s not real and it goes over a period of 30 years in 1 ½ hours.”

“It’s not just a period drama because it says so many things,” she added.

“Gunderson put in a lot of humor, so the science part is not boring. It’s science that’s mixed with family, with good feeling, romance and with sadness.”

These music and light elements will propel and even explain what transpires onstage, said Virata, as she showed off a digital illustration of Mendoza’s scenic vision.