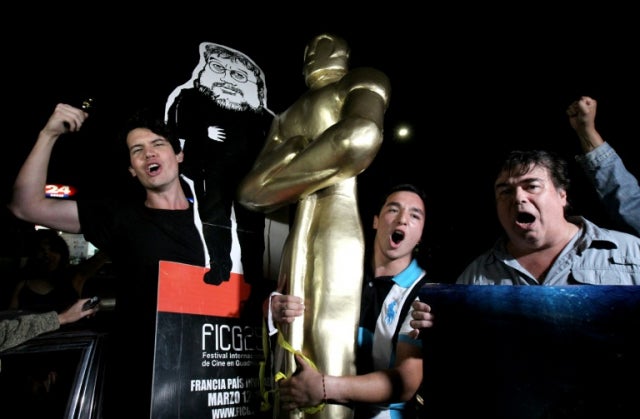 Partying to mariachi music, exuberant fans of Mexican director Guillermo del Toro paraded around his native Guadalajara with a giant replica Oscar on Sunday after he won the Academy Awards for best picture and best director.

Whether at the swanky official viewing party or on the streets, friends and fans in Mexico’s second city feted their hometown hero and his triumphant fairy tale romance “The Shape of Water,” which won a total of four statuettes on the night.

“Ole, ole ole ole! Toro, Toro!” chanted the small but ecstatic crowd at the Glorieta de la Minerva, a large fountain in the heart of Guadalajara, the western city where Del Toro grew up.

At a tonier event in an upscale shopping center, mariachis in their trademark giant-brimmed hats — another Guadalajara icon — serenaded invitees watching the ceremony in Hollywood on a jumbo screen.

“He’s a monster of filmmaking,” beamed Cesar Cosio, a DJ and longtime friend who grew up in the same neighborhood as Del Toro.

“It’s very deserved. I’m so grateful for this moment, watching Guillermo triumph, lifting that statuette. It couldn’t have happened at a better time. I think it’s his best work to date.”

The “monster” comment is fitting: “The Shape of Water” is a love story between a cleaning woman at a top-secret US government research facility and a strange amphibious monster held captive there.

In fact, exquisite and fascinating monsters are Del Toro’s trademark in all his films.

In interviews, he has said he dreamed up his entire fantastical world as a boy in Guadalajara, where he loved playing with snakes, rats and slugs and made his first short film about a monster who emerged from the toilets at his school.

Friends say Del Toro, 53, is still the same gentle, fun-loving and explosively creative Guadalajaran, or “Tapatio,” they knew back then.

“I’m so grateful he’s kept up the friendship, despite being so famous and in-demand,” said David Lopez Ochoa, a childhood friend who owns the house where Del Toro shot one of his first movies, “Dona Herlinda.”

“You can see he’s proud to be a ‘Tapatio,’ to bear that standard. He’s deserved this for years.”

‘Sure he would win’

As confetti fell at the shopping center, Lopez Ochoa said he and Del Toro had always shared a similar interest in the strange.

“We were united both by our studies at university and by our love of all things sinister and macabre,” he told AFP.

Cosio, the DJ, had similar memories.

The first-ever show he played was at Del Toro’s boyhood home, he recalled. It was, by his account, a classic Del Toro party.

“He had decked the whole place out in Halloween decorations,” he said.

Back at the Minerva fountain, a life-size cardboard cutout of Del Toro joined the giant Oscar replica as fans paraded around the circle to the famous mariachi number “Cielito Lindo.”

Brian Salef said he scored the giant caricature of the director at the Guadalajara International Film Festival, which will be held next week with Del Toro as guest of honor.

“I was already prepared, I was sure he was going to win from the moment the movie came out,” he said. AB