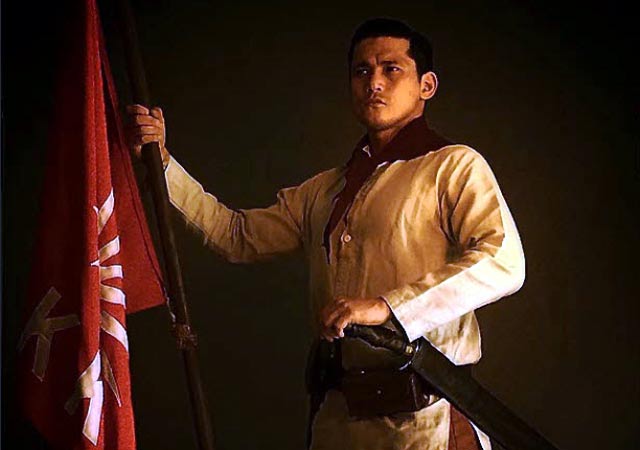 Robin Padilla as the Katipunan founder in the 2014 film "Bonifacio: Ang Unang Pangulo"

Robin Padilla ‘devastated’ over loss in bidding for Bonifacio letters

Robin Padilla bidded for the set of “explosive” letters by Andres Bonifacio on the Tejeros convention in 1897 that unseated the revolutionary leader, but the actor lost in the auction by León Gallery on March 3.

Padilla himself went to the auction to make his bid.

Padilla, who played the Katipunan founder in the 2014 movie, “Andres Bonifacio: Ang Unang Pangulo,” was “devastated” when he lost, said auction officials.

The four letters and the envelope with the Katipunan seal addressed to Emilio Jacinto, whom the Katipunan founder had appointed as army head in Pasig, had a starting bid of P500,000 each.

Provenance of the letters is the estate of Epifanio de los Santos, the historian and director of the National Library after whom Edsa is named.

Over all, the letters and the envelope were sold for P16.2 million, said León Gallery owner Jaime Ponce de León.

Ponce de León refused to say if the letters were won by a single bidder.

“As you know, León is the soul of discretion,” said Ponce de León. “We cannot answer any questions related to any bidder.”

Its hammer price was P5.6 million.

Guerrero Nakpil herself is a descendant of Julio Nakpil, who married Bonifacio’s widow Gregoria de Jesus.

Earlier, Guerrero Nakpil had described the letters as “explosive” for casting new light on the Tejeros convention that she called a “snap election.”

During the Tejeros convention on March 22, 1897, in Cavite, Cavite revolutionary leader Emilio Aguinaldo was elected president and Bonifacio, insulted by delegate Daniel Tirona, for his alleged lack of education, declared the results invalid.

Bonifacio was ordered arrested by the new government and a tribunal found him guilty of treason and sentenced him to execution.

Although Aguinaldo commuted the death sentence, his men killed Bonifacio in Maragondon, Cavite, in what historians have called “the tragedy of the revolution.”

Rival historical camps have since either excoriated or defended Aguinaldo over the death of Bonifacio.

Largely as a reaction to that movie, “Bonifacio: Ang Unang Pangulo” starring Padilla was shown in the same festival in 2014.

It portrayed Bonifacio, not Aguinaldo, as really “the first president.”