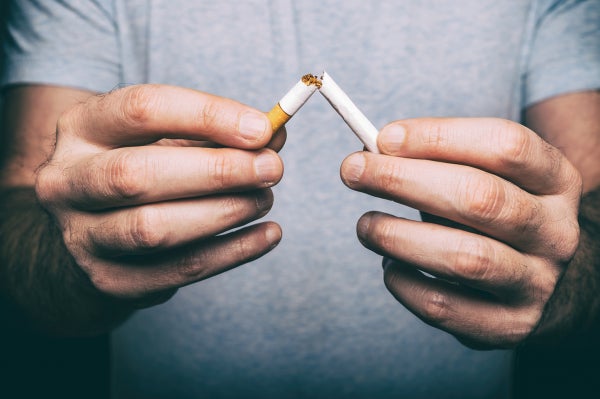 Even as the percentage of adults who smoke has dropped in rich nations and plateaued in some emerging ones, the total number of smokers keeps climbing, driven by an expanding global population and more people in poor countries lighting up. © MarcBruxelle / Istock.Com through AFP

Girding for new battles in the war against Big Tobacco

Some 3,000 anti-tobacco experts and policymakers convening this week in Cape Town, South Africa confront an industry flush with profits and determined to expand the market for its deadly product.

The 17th World Conference on Tobacco or Health, meeting from March 7 to 9, will review the latest research on e-cigarettes, debate which policies best blunt tobacco sales, and take stock of worrying trends across the developing world.

The name of the conference, “Tobacco OR Health”, leaves no room for doubt: you can’t have both.

“The cigarette is the single most deadly consumer product ever made,” said Ruth Malone, a professor at the University of California’s San Francisco School of Nursing and editor-in-chief of the Tobacco Control journal.

Tobacco claims nearly seven million lives yearly from cancer and other lung diseases, and accounts for about one-in-10 deaths worldwide, a million in China alone, according to the World Health Organization.

Even as the percentage of adults who smoke has dropped in rich nations and plateaued in some emerging ones, the total number of smokers keeps climbing, driven by an expanding global population and more people in poor countries lighting up.

“The fact remains that one out of every four men still smoke, as do one out every 20 women,” Emmanuela Gakidou, a researcher at the University of Washington’s Institute for Health Metrics and Evaluation, told AFP.

What the WHO calls a “tobacco epidemic” eats up one trillion dollars in healthcare expenses and lost productivity every year.

But the United Nations, governments, NGOs and activists have not stood by idly.

The 180-nation Framework Convention on Tobacco Control, the only treaty negotiated under the WHO, lays out actions for curbing supply and demand.

Measures include higher prices and taxes, laws to curb smoking in public places, graphic labelling on the dangers of tobacco, banning advertising, and programmes to help people quit.

“The single most effective measure to reduce tobacco use is to increase the price of tobacco products, through taxation or pricing,” Kelley Lee, a policy expert at Simpson Fraser University in British Columbia, told AFP.

Australia, Canada, France, Britain and other European countries have also pushed through laws requiring logo-free, plain packaging dominated by graphic images such as rotted teeth and throats wasted by cancer.

Cities around the world have banned smoking in public places, including Shanghai last year.

Health advocates say these efforts have saved 35 million lives over the last decade.

At the same time, however, they have barely dented industry profits.

British American Tobacco — the largest publically-traded tobacco company in the world after the takeover last year of Reynolds American — raked in 5.2 billion pounds (5.8 billion euros, $7.2 billion) in profits in 2016.

The shares of all major listed tobacco companies soared in 2017.

“The tobacco industry has learned to wield extensive political influence to survive, and even thrive, despite producing and marketing a product that kills half of its regular customers,” said Lee.

“There is no easy way to challenge such a powerful industry given its deep pockets.”

One is the aggressive expansion of state-run tobacco monopolies in East Asia.

“The global market share of the new emerging — especially Asian — tobacco companies is growing rapidly,” said Jappe Eckhardt, a professor at the University of York in England.

Japan Tobacco International, he said, morphed in less than a decade from a domestically oriented company to a major multinational.

“Our research shows that Korea is going to follow suit,” with Taiwan and Indonesia not far behind, he told AFP.

Jury still out on e-cigarettes

“And China’s national company” — the largest in the world, with a 42 percent market share of cigarettes sold — “is poised to dwarf all existing companies in the foreseeable future.”

Another hot topic at the conference will be e-cigarettes, which has caused a “sharp division” in the public health community, said Lee.

“Given how relatively new these products are, we just don’t have the data on their long-term health impacts,” Lee told AFP.

The jury is still out, she said, on whether vaping is a “gateway” to combustible smoking, and may be dangerous in itself.

In the meantime, the industry has opened up a legal front in the war over tobacco, launching dozens of lawsuits against governments on every continent trying to enact anti-smoking laws.

In one recent case, Philip Morris sued the government of Uruguay, claiming that its packaging laws violated an investment treaty with Switzerland. MKH

Switching to e-cigarettes would delay millions of deaths—study

Self-regulation key to success of vaping industry in PH