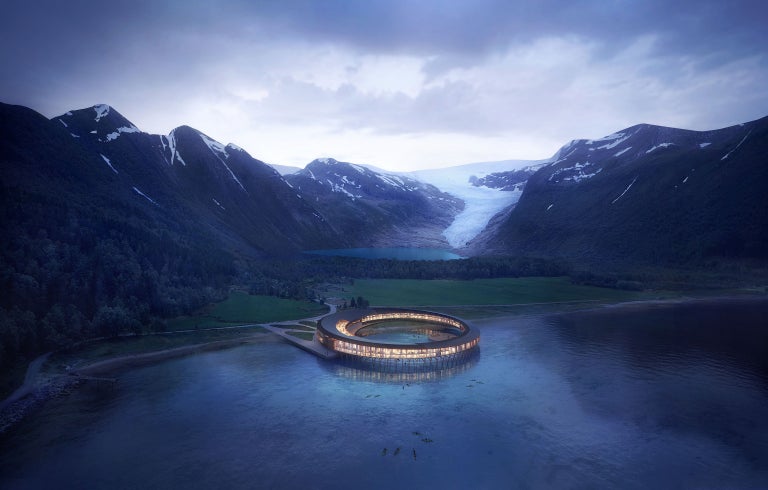 Far up north, in the quiet wilderness of a Norwegian fjord just above the Arctic Circle, a ring-shaped hotel is currently being built that will generate more energy than it consumes, while offering guests 360-degree views of its stunning, dramatic setting.

Dubbed the world’s first “energy positive hotel concept” to be built by the Arctic Circle, artist renderings for the Svart hotel reveal a futuristic, ring-shaped structure set upon stilts in the Holandsfjorden fjord, creating the illusion of an overwater, floating hotel.

According to developers, not only will the hotel consume 85 percent less energy than a traditional hotel, but it will also be self-sustaining and generate its own electricity.

The project is a collaborative effort between Arctic Adventure of Norway, Snøhetta, the Powerhouse Collaboration and local partner Vitar AS.

Not only does the ring-shaped structure make for striking architecture, the choice to build a circular hotel serves another purpose entirely. The circular design optimizes the harvest of solar energy, which is used to power the hotel.

In summer, the building’s solar paneled roof harnesses the power of the midnight sun. In winter, the floor-to-ceiling windows absorb as much sunlight as possible and its thermal energy.

The primary material used in its construction is wood, and the use of steel and concrete is kept to a minimum.

Along with panoramic views of the Svartisen glacier in the distance, guests of Svart will have front row seats to the Northern Lights and access to hiking and cycling trails, kayaking and boating.

The word “Svart” means black in Norwegian and is a reference to the deep blue-black ice of Svartisen. The hotel is scheduled to open in 2021.

Meanwhile, Svart is the latest luxury hotel project to take intrepid travelers to the final frontiers of the earth.

Last month, The Sheldon Chalet opened its doors on the peak of an Alaskan glacier, 6,000 feet above sea level.

At $2,300 (over P119,000) a night, the luxury chalet spares no expense for its affluent guests, with fur throws, fireplace, full-service kitchen, dining space, sauna, observation deck and an on-site personal chef. JB