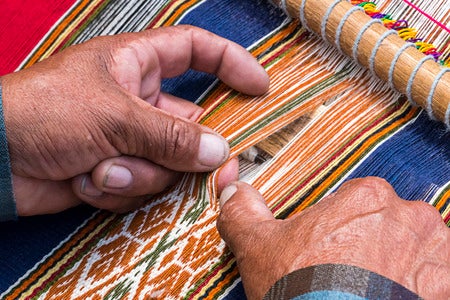 One woman is changing the way Saudi Arabians look at history and heritage through the peculiar use of textile.

Dr. Laila Al-Al Bassam is one of the first females in the Kingdom of Saudi Arabia to do such a thing, learning of historical events and traditions, and documenting it through weaving and preserving traditional costumes.

Dr. Al-Al Bassam’s love for textile comes as a Proustian thing, beginning in the early years of her childhood when she first watched her mother fold her grandmother’s dresses in an ancient chest, as reported by Arab News on March 5. Dr. Al-Al Bassam visited the province of Unaizah as a young girl and there she bought her first traditional costume, kindling her passion and penchant for traditional wear.

Embroidery isn’t just beautiful in its aesthetic, but also tells a unique story on its own. Certain embroideries signify a specific tribe and through the patterns and the warps and wefts of the thread, the history of the people are narrated.

“Decorative embroidery well-defined each region as its own. It signified one tribe from another as well,” Dr. Al-Al Bassam told Arab News. “The importance of these subjects can’t be emphasized enough. They are the means of allowing a younger generation to get a glimpse of and understand he history of our culture and heritage.”

In one video shared by Dr. Al-Al Bassam on Instagram back in November last year, she shows a woman expertly rolling thread in a long wooden spindle with a calculated flourish of the hand, a standard preparation in traditional weaving.

The distinct features of the Arab garments, said Dr. Al-Al Bassam, can be found in their stitching, the kind of fabric used, the choice of color, as well as the jewelry and accessories: “You can know a lot through these features, which culture they were influenced by, and you can differentiate between each tribe’s costume, for example, through these features.”

The discovery of oil in the past century led to the demise of traditional costumes in the Kingdom; traditional styles and designs have disappeared as Saudi Arabia moved in the direction of modernity, not just in terms of fashion but in the sociocultural and political aspects as well.

This is where Dr. Al-Al Bassam’s importance comes in as a preserver of heritage and culture for future generations who have yet to bear witness to Saudi Arabia’s history. She added, “It’s important that I share my knowledge with everyone, to raise awareness of the importance of preserving our beautiful heritage.” Cody Cepeda/JB

Celebrating the art of ‘inaul’ weaving