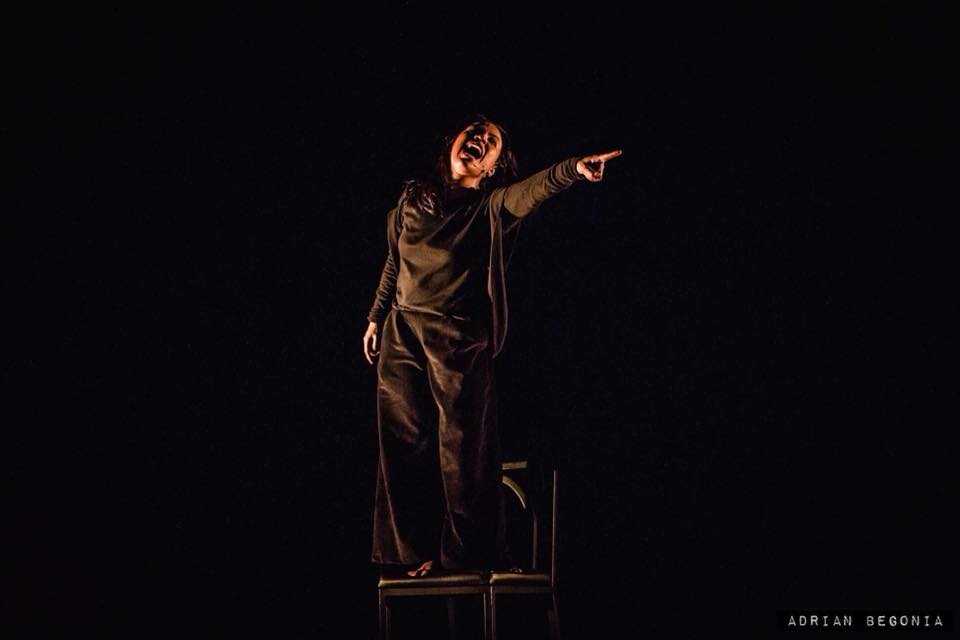 Skyzx Labastilla in a scene from “And Dalagita’y ‘sang Bagay na Di-buo”—Rody Vera’s Filipino translation of Eimar McBride’s novel “A Girl is a Half-formed Thing” as adapted for the stage by Annie Ryan, directed by José Estrella. Missy Maramara and Opaline Santos also alternate in the part.—PHOTO BY ADRIAN BEGONIA

Dulaang UP’s “Ang Dalagita’y ‘sang Bagay na Di-buo,” now on its closing weekend at the University of the Philippines-Diliman’s Wilfrido Ma. Guerrero Theater, begins with a woman in basic black, on a stage whose only set piece is a chair.

The stark emptiness is deliberate: All eyes, throughout this nearly two-hour monologue, are trained on the woman, whom we follow from childhood, living with her physically scarred brother and toxic mother, all the way to the cusp of adulthood, as she roams the big city and discovers the plethora of pains and pleasures the body can handle.

But what a wretched life. The protagonist gets hit, raped, hit again, raped again, in a vicious cycle of abuse that seems more an endurance test for viewers. Just exactly how much is too much for one who must have already been doomed in the womb?

Perhaps not the most gracious answer: If one can get through all seven seasons of “Game of Thrones,” this should be a walk in the park. In fact, past its bleak, unforgiving surface, the play’s theatrical pleasures run aplenty.

Every performance of “Dalagita” begins and ends with its actress, who must carry the weight of the play on her entire body, constantly slipping in and out a multitude of characters, oftentimes in a matter of seconds. It’s a taxing role of a lifetime, to say the least, which must be why the production has four women alternating in the part: Skyzx Labastilla, Missy Maramara, Opaline Santos and understudy Hariette Damole.

No other way to phrase it: Labastilla gives a tour de force performance. Every bit of her is believable, every character shaded and textured with nothing short of the truth. She wrings our heartstrings as the titular girl, provokes our fury as the girl’s mother or her vile uncle, and cleanly lands the laughs in smaller parts such as the girl’s vapid, English-spouting college friend.

To watch Labastilla in the role is not only to witness the wretched life unfold, but more importantly, to somehow understand its wretchedness, how it persists through the years. It is to see, with a discerning, empathetic eye, how abusive structures come to shape their victims and the world around them, and how difficult it is to break such a world apart.

(Maramara, for her part, delivers a performance of “mind-boggling versatility,” notes fellow Inquirer reviewer Arturo Hilado in a Facebook post.)

The acting is only half the reason this “Dalagita” flows as well as it should, however. The other half is Jon Lazam’s sound design, which is nothing if not vital to the world-building, ensuring the viewer always knows, in the absence of visual cues, the specific time and place of every scene.

That world, for the unfamiliar, is Rody Vera’s Filipino translation of the play that’s adapted from Eimear McBride’s novel “A Girl Is a Half-formed Thing.” In the book, the language is a form of primal, fragmented English, as if it burbles straight from the characters’ emotional cores.

Vera’s work, thankfully, “straightens” the language, interpreting it in a conversational form that snugly fits the mold of the stage. But all the anguish, the lividness, the recklessness, he has retained—in some instances, even rendered more vividly in the native tongue.

And as directed by José Estrella—inarguably her finest work for the company in at least the last four years—this “Dalagita” comes alive in heartrending, soul-torching ways, as it sculpts an infinitely layered whole out of a “half-formed thing.”

Squeamishness may be a natural reaction by the end, but so also is the curious urge to see this powerful production one more time, maybe even two or three. —CONTRIBUTED