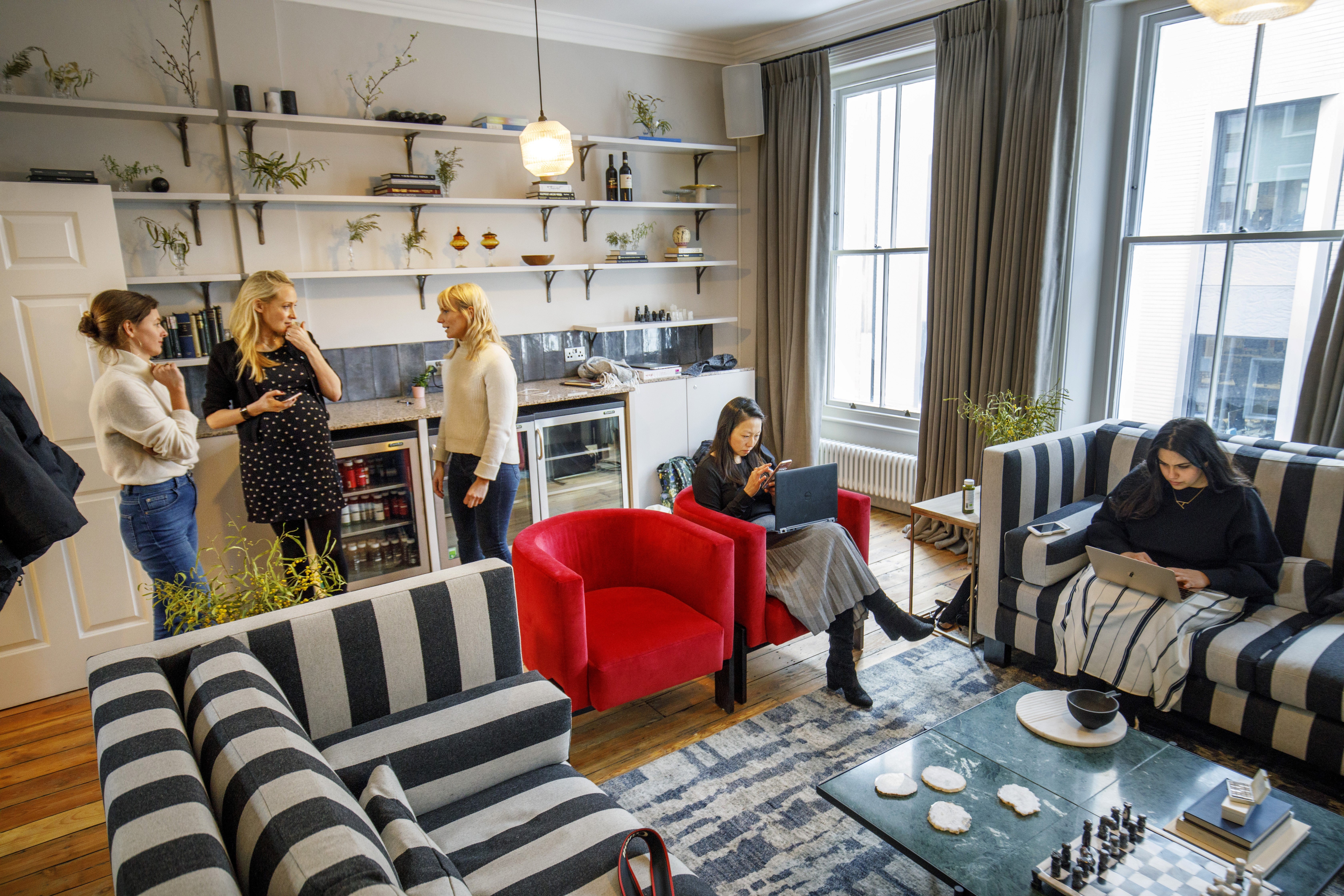 Members use the facilities at London's first women-only private members' club, The AllBright, in central London on February 28, 2018. A refuge for gentlemen over centuries, women are now having their turn to enjoy private members clubs, in the process harnessing a British tradition of female activism seemingly renewed by the nascent #MeToo movement. Image: AFP/Tolga Akmen

A refuge for gentlemen over centuries, British women can now enjoy private members clubs, continuing the country’s tradition of female activism amid the #MeToo movement.

A short walk from Oxford Street, in the heart of London’s West End, sits an elegant five-storey brick Georgian mansion.

It houses The AllBright, a newly-opened private club and the latest in the British capital to cater exclusively to women’s needs — both personal and professional.

Founded by Debbie Wosskow, 43, a start-up entrepreneur, and Anna Jones, formerly of the Hearst Media Group, the club — dedicated to “working women” — already has 400 members and a long waiting list.

“It’s by women, for women, and we think that has been missing up to now,” Jones told AFP.

Wosskow said the duo had tried to empower women throughout the venture.

“Everything in the building… the art on the wall, to the wine that we serve, is by women for women and showcasing female talents,” she added.

Although Britain currently has its second woman prime minister — Theresa May — in power, gender equality is still far from assured, according to the club founders.

The pair want women to spend their days working, and their evenings unwinding in The AllBright.

“The objective is to try to make the UK the best place in the world to be a working woman,” said Wosskow, pitching the club as “a combination of networking alongside great food, cocktails and events.”

There are no smoke-filled cigar rooms, or Chesterfield leather armchairs — staples of many men-only equivalents.

Instead the decor is cozy, refined and warm, fusing British chic and Scandinavian design.

Members can relax in deep sofas or work at shared tables.

There is a dining area on the ground floor and an art deco bar on the top level, while other floors host more studious rooms for working and holding meetings during the day.

When AFP visited, a backdrop of jazz music competed with the constant hum of laptop keyboards.

New member Le’Nise Brothers, a nutritionist, joined “to be around like-minded women” and for networking.

“It’s just a different atmosphere when you’re around women,” she said.

“(I’m) not saying that if men were here it would be a negative thing, because it’s not, but naturally women’s spaces just tend to be warmer and more welcoming and just very inclusive.”

The founders said although the club is female-centric, men were still welcome inside its doors.

“It’s definitely not anti-men,” said Jones. “Members can invite men in as guests.”

“Room of her own”

The AllBright follows in the footsteps of other new London establishments aimed at women, like We Heart Mondays which opened last year as “a diverse creative space for female entrepreneurs”.

Although they cannot match their male counterparts’ histories, female clubs in fact have a long history in the British capital.

The Pioneer Club was among the most famous, founded in 1892 by Emily Massingberd, considered an avant-garde and feminist in the cultural circles of her time.

“Women’s clubs have above all been an attempt to claim social and physical space for women especially in city centres,” wrote David Doughan and Peter Gordon in a book on the subject, “Women, Clubs and Associations in Britain”.

The venues “provided a haven for middle-class women from the demands of family, children, servants, and tradesmen and even, as Virginia Woolf put it, ‘rooms of their own’,” according to the authors.

“A woman must have money and a room of her own,” it implores guests. CC