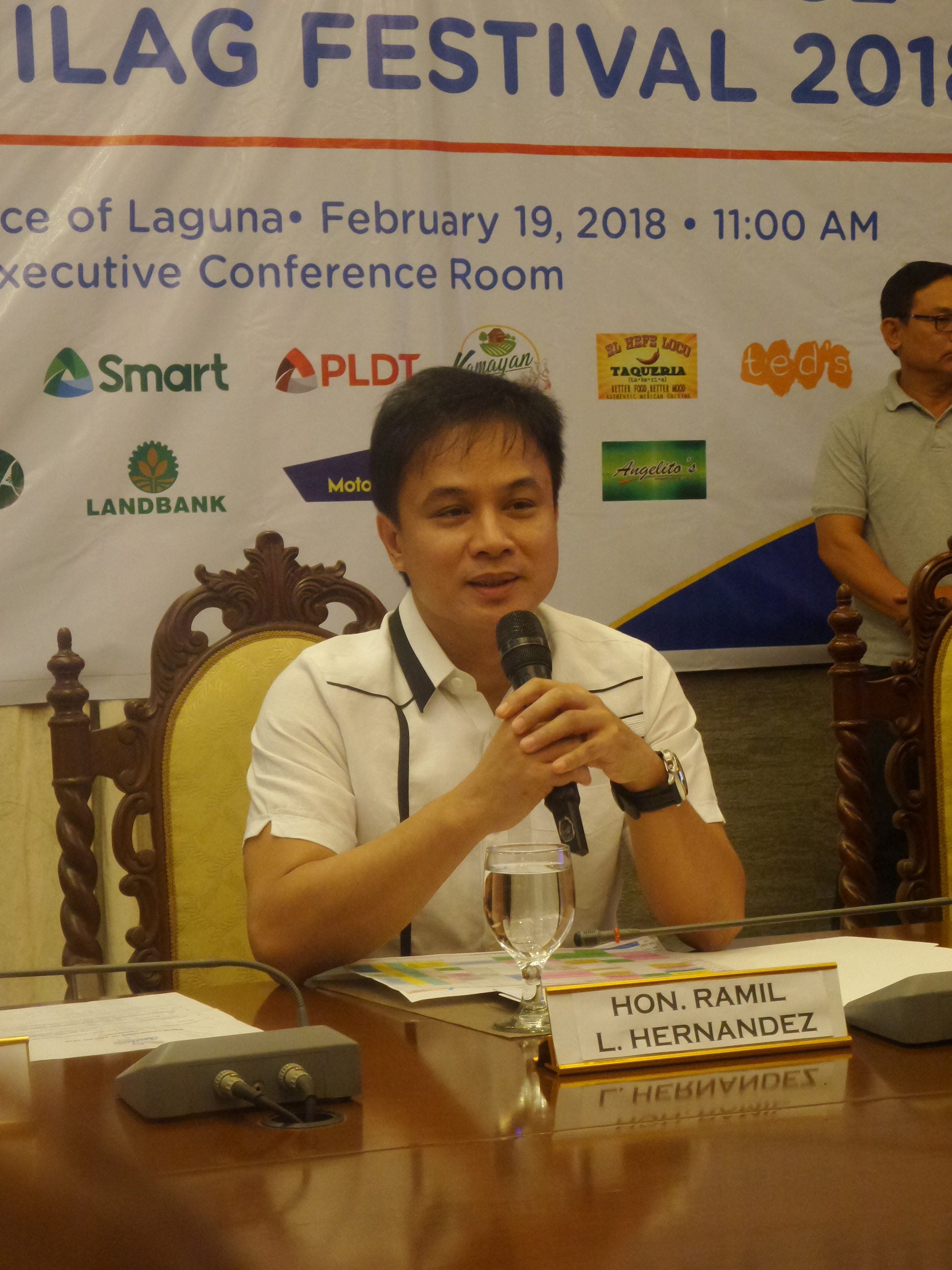 STA. CRUZ, LAGUNA—The province of Laguna hopes to attract even more tourists and further promote its various destinations in this year’s celebration of the “Anilag” Festival.

Gov. Ramil Hernandez launched this year’s edition of the annual festival at the provincial capitol in the town of Sta. Cruz last month, where he also shared that the celebration will highlight the family with the theme “Sama-sama ang Pamilya sa Masayang Laguna” (The family is together in fun Laguna).

“A place is progressive, active, very interesting and beautiful if the whole family enjoys there. And Laguna has attractions that cater to all ages. We have activities for the youth, the seniors and adults, and for little children,” Hernandez said in a mix of English and Filipino.

“Children may visit Enchanted Kingdom, while the senior citizens may enjoy our hot springs. For the more adventurous teenagers or young professionals, there’s wakeboarding, hiking or swimming,” he added.

“Our focus is on making the entire family happy. We want to send the signal that Laguna is for all ages and that every member of the family will find something to enjoy in the province,” Hernandez continued.

This is the festival’s third edition after its revival in 2016. During the administration of Gov. E.R. Ejercito, the festival was renamed to “La Laguna.”

“The Anilag Festival started during the administration of Gov. Joey Lina, and it continued even under a different governor. And when we assumed the post, we decided to bring back the original and first name of the festival,” Hernandez shared.

He clarified that the provincial government still recognizes the accomplishment of the La Laguna festival and the previous administration. “But the other provinces do not change their festival’s name under every administration, that’s why they generate more recall. If we keep on changing the name, we won’t move forward,” the governor stressed.

And Hernandez surmised that he made the right decision, citing the Department of Tourism’s recent proclamation of Laguna as the “Most Visited Province in Calabarzon (overnight stay)” last year. Calabarzon is the cluster of the provinces of Cavite, Laguna, Batangas, Rizal and Quezon in Southern Luzon.

Dr. Rosauro Sta. Maria Jr., the overall committee chairman of the festival, said that aside from establishing a “circuit” to coordinate with the local tourism officers in the province’s towns and cities, Laguna is also working with the provinces of Batangas and Quezon to promote tourism in the entire Calabarzon.

But Hernandez stressed that more than promoting the destinations, food and merchandise, the province of Laguna hopes to highlight its most important product—the “Lagunense.”

“We discover talents, beauty queens from Laguna. They are part of the whole of Laguna, not only the environment and the sceneries,” he explained.

The governor also said he hopes the annual festival will help open up the other lesser known towns and destinations of the province, to expose the tourists to what these places have to offer and eventually translate to arrivals.

To help achieve this, Hernandez said the provincial government is laying down plans to decongest traffic in Los Baños. A coastal road along Laguna Lake will also provide easier access to the province’s third district.

Among the activities lined up for the eight-day Anilag festival are a trade fair, fluvial parade, street dancing, fashion competition, film and photography competition, motor show, and the search for the Binibini at Ginoong Laguna.