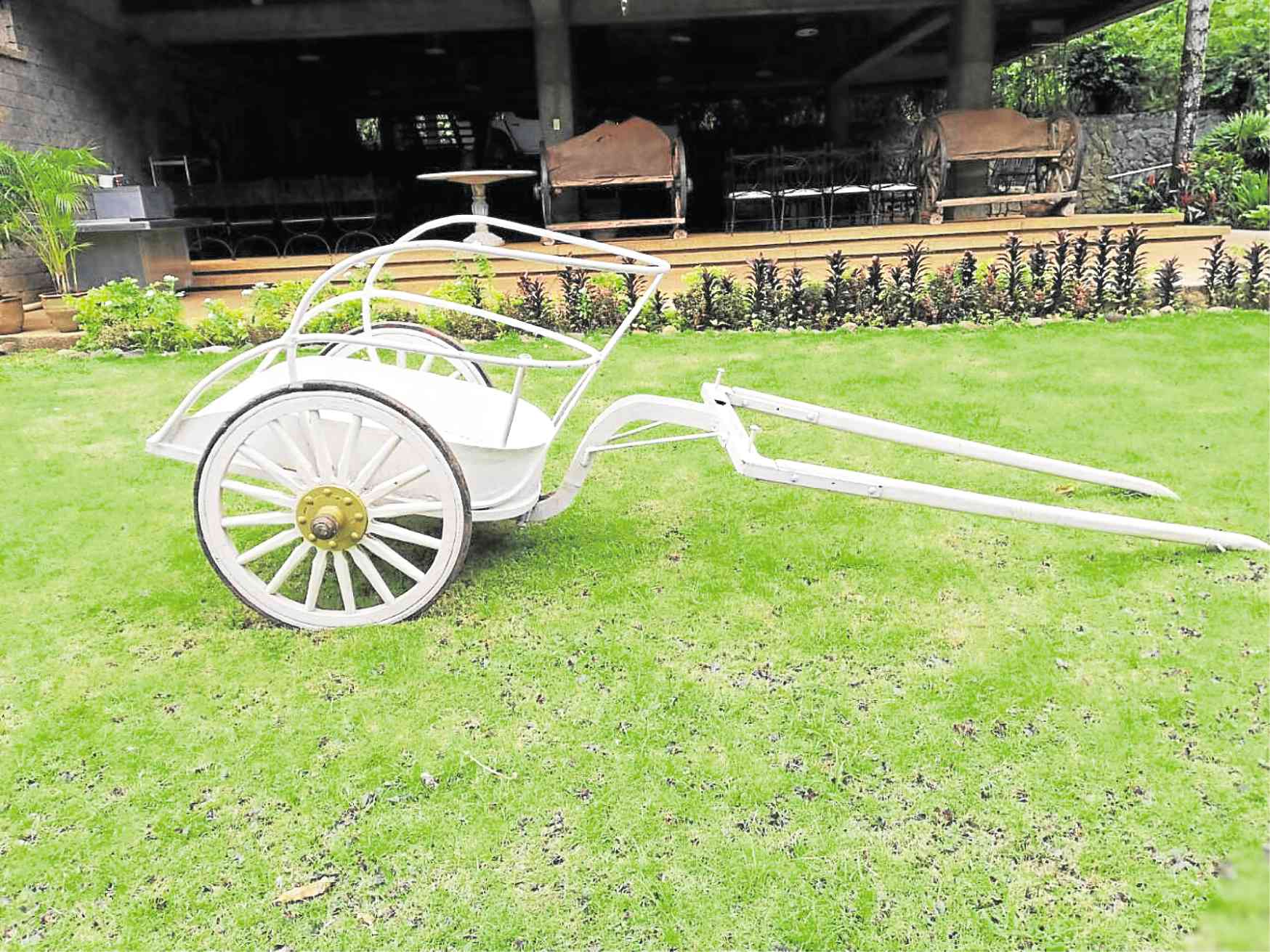 This is the actual chariot built and ridden by National Artist Napoleon Abueva, now in a private collection. According to artist Junyee, who helped build it when he was Abueva’s apprentice in the 1960s, the chariot was originally a darker color.

‘Art, Heart and Hearth’: Abueva embedded on our wall

Thirty-nine years ago my husband Reggie and I decided to build a house. It was a major project for our family of six. The plan to build was fast and uneventful, not even known among close friends. But when they later learned about the location, they described it as “the mountains.” That’s right, we chose to live in “the mountains” or what is now a somewhat busy Tandang Sora area in Quezon City.

One day, an artist-friend saw me passing through the area and we stopped to talk. His house was at the base of the hill where we were constructing.

From that time on, he would often drive by and look over the progress of the construction. He knew our family well because like him, Reggie had also been with the faculty at the University of the Philippines.

When the walls were up, this friend asked Reggie what the cement wall between the brick walls would have on it. Reggie said, “Nothing.” The artist said, “Don’t touch it. I’ll take care of it.”

All the walls of the house were made of bricks except for this particular space, which would become the main wall of the living room. When we were discussing the architectural design of the house, my only input was: “I want a house of bricks and wood, with exposed rafters, and the wood should have an ‘unfinished’ look.”

The five hardwood cuttings were narra, kamagong, ipil, molave and mulawin. In effect, these pieces of wood were not cut out for a definite design or purpose.  They were leftovers from previous sculptural works, saved and not thrown away.

It took almost three years for the artwork to be finished and for us to see and understand what it was all about. It turned out to be a beautiful wooden mosaic-like relief in our living room wall. The whole piece is embedded in the concrete wall and it cannot easily be taken down. It has been with us for more than 35 years.

The upper portion, as the artist had explained, are the forces of nature—the sun, the rain, the moon—as well as the face of Christ, the crown of thorns and the Tree of Life. The lower portion is a social commentary: Peace, Violence, Unrest. On the lower right side are the initials of the members of our growing family.

Beside the initials of our eldest son Ferdie, an Atenean who was among those killed during the martial law years, the artist placed, as a “second name,” a fat cross, because he said, “He is happy where he is.” And below all that, the artist’s name: ABUEVA.

The art piece is included in the coffee-table book “Abueva” (PMFTC, 2010) by Cid P. Reyes, with the caption, “Arceo Family Relief, 1976-1979, wood, 284 x 111.5.” Though untitled, our family gave it a name: “Art, Heart and Hearth.” Besides the relief on the wall, the National Artist Napoleon “Billy” Abueva had gifted our family with two smaller art pieces. Billy’s obra is part of our home. —CONTRIBUTED

The author, 92 years old, is the widow of Reginaldo Arceo Sr., who taught at the University of the Philippines. They have four children. The Arceos and the Abuevas have been neighbors for almost four decades. National Artist for Sculpture Napoleon “Billy” Abueva passed away last Feb. 16 at the age of 88.