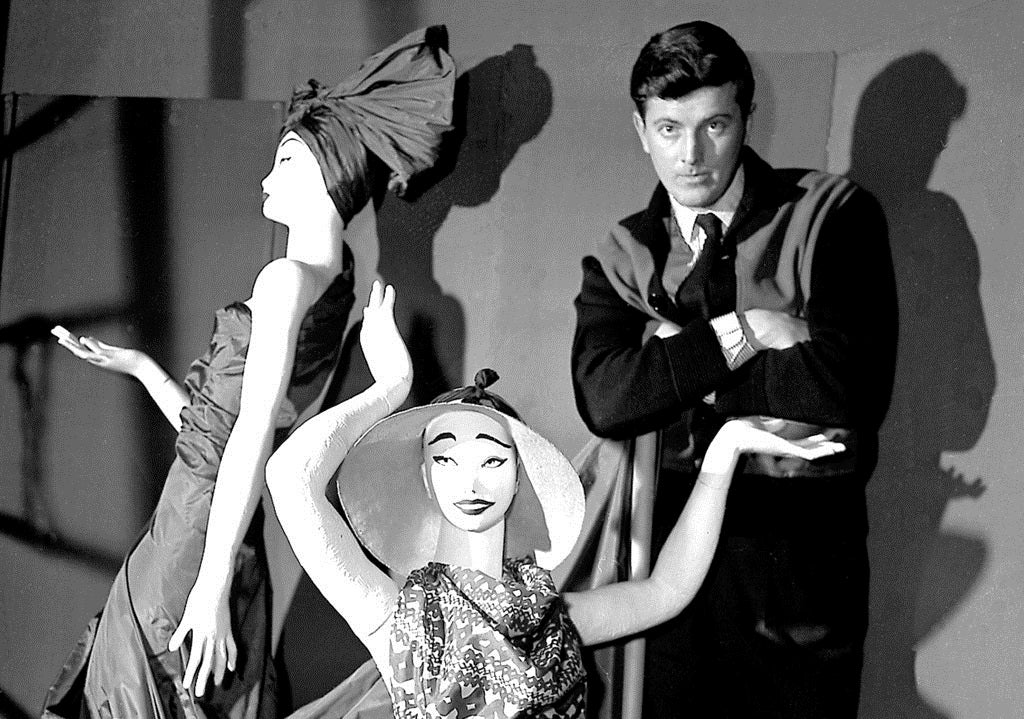 In this February 1, 1952 photo, French fashion designer Hubert de Givenchy poses with mannequins in his shop in Paris. French couturier Hubert de Givenchy, a pioneer of ready-to-wear who designed Audrey Hepburn's little black dress in "Breakfast at Tiffany's," has died at the age of 91. (AP File Photo)

PARIS — French couturier Hubert de Givenchy, a pioneer of ready-to-wear who designed Audrey Hepburn’s little black dress in “Breakfast at Tiffany’s,” has died at the age of 91.

The house of Givenchy paid homage to its founder in a statement as “a major personality of the world of French haute couture and a gentleman who symbolized Parisian chic and elegance for more than half a century.”

“He revolutionized international fashion with the timelessly stylish looks he created for Audrey Hepburn, his great friend and muse for over 40 years,” the house of Givenchy said.  “His work remains as relevant today as it was then.”

Along with Christian Dior, Yves Saint Laurent, and mentor Cristobal Balenciaga, Givenchy was part of the elite cadre of Paris-based designers who redefined fashion in the wake of World War II.

Givenchy, speaking in 2017 at an exhibition of his creations at the City of Lace and Fashion in Calais, said that “too much artifice” detracts from clothing.

“A piece of material has a life. You must never upset it, if you want the material to speak,” he said.

A towering man of elegance and impeccable manners, he forged close friendships with his famous clients, from Hollywood screen sirens of the likes of Liz Taylor and Lauren Bacall to women of state, including Jackie Kennedy and Princess Grace of Monaco.

Born into an aristocratic family in the provincial city of Beauvais on February 21, 1927, Givenchy struck out for Paris in his late teens, in the wake of World War II.

Couturier Jacques Fath hired Givenchy on the strength of his sketches. He spent two years learning the basics of fashion design – from sketching to cutting, and fitting haute couture styles.

After apprenticing with other top names, Givenchy founded his own house in 1952.

His debut collection ushered in the concept of separates — tops and bottoms that could be mixed and matched, as opposed to head-to-toe looks that were the norm among Paris couture purveyors.

“Le Grand Hubert,” as he was often called for his 6-foot, 5-inch (1.96 meters) frame, became popular with privileged haute couture customers, and his label soon seduced the likes of Gloria Guinness, Wallis Simpson, and Empress Farah Pahlavi of Iran.

But the client whose name would become almost synonymous with the house was Audrey Hepburn, whom he met in 1953, when he dressed her for the romantic comedy “Sabrina.”

Legend has it that Givenchy — told only that Mademoiselle Hepburn would be coming in for a fitting — was expecting the grand Katharine Hepburn. Instead, the diminutive Audrey showed up, dressed in cigarette pants, a T-shirt, and sandals.

Thus, began a decades-long friendship that saw Givenchy dress the star in nearly a dozen films, including the 1961 hit “Breakfast at Tiffany’s.” The sleeveless black evening gown she wore in the movie, complete with rows of pearls, elbow-length gloves, and oversized shades, would end up becoming Givenchy’s most famous look.

The French president’s office praised Givenchy as a designer whose name became an emblem for French elegance, with one principle: “to respect and celebrate the woman’s body.”

His classical approach eventually “led him to no longer see himself in more unstructured styles” taking over the fashion world, the Elysee Palace statement said.

“France loses a master, the Master of elegance, of creation, of invention,” the statement said, sharing the condolences of President Emmanuel Macron and his wife, Brigitte, to Givenchy’s companion and friends.

Aiming to reach a wider market, Givenchy launched a line of upscale ready-to-wear and accessories in the 1960s. Its commercial success soon enabled him to buy out his backers, making him one of only a handful of Paris couturiers to own their own label outright.

In 1988, he sold the house to French luxury conglomerate, LVMH, the parent company of a stable of top fashion labels that now includes Dior, Celine, Marc Jacobs, Pucci, and Kenzo.

Givenchy retired in 1995, and was succeeded by John Galliano, Alexander McQueen, Julien Macdonald, Italy’s Riccardo Tisci, and its current chief designer, Clare Waight Keller, the first woman in the role.

Waight Keller, at the helm of the brand since 2017, said on her official Instagram account she is “deeply saddened by the loss of a great man and artist I have had the honor to meet.”

“Not only was he one of the most influential fashion figures of our time, whose legacy still influences modern day dressing, but he also was one of the chicest most charming men I have ever met,” she wrote.

Bernard Arnault, CEO of LVMH, said he is “deeply saddened” by Givenchy’s death.

“He was among those designers who placed Paris firmly at the heart of world fashion post 1950 while creating a unique personality for his own fashion label,” according to a statement released by LVMH.