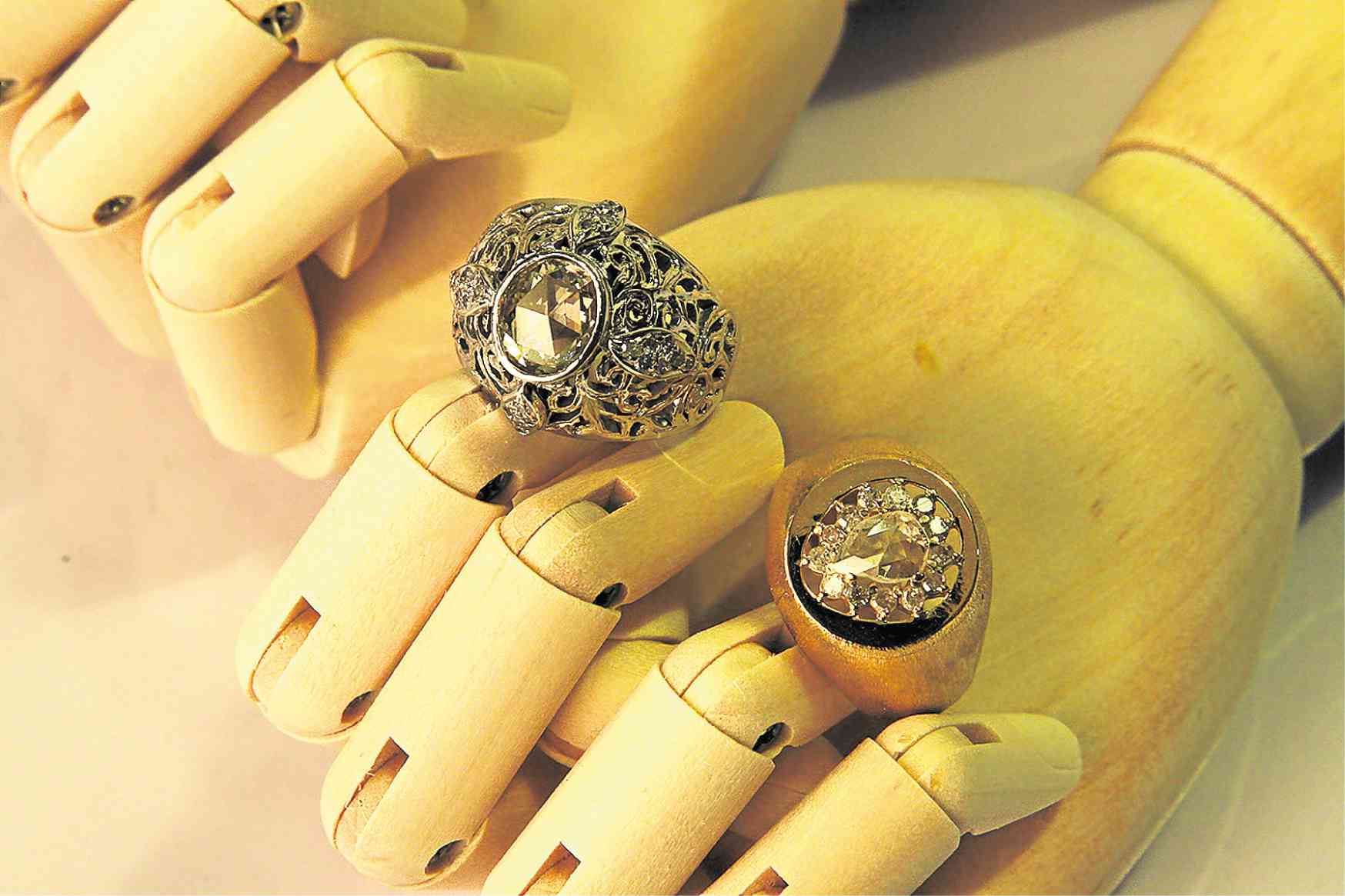 When she’s not working on a commercial design project, Natalya Lagdameo is restoring an antique tambourine, counting the number of beads and selecting the right pendant or reliquary.

“I have to make sure there are enough beads to put them in sequence,” she explains.

In making the tambourine necklace, the links and the in-between spaces are the most difficult because of their minute detail, but are also the most important. The spaces provide the necessary “breathing space.”

The antique pendants are fused with minute spheres or granules, creating an intricate pattern of dots.

Often asked if she even has time to sleep, she replies that being well-rested is vital to creativity.

She is better known for her eponymous jewelry line whose trademarks are the tambourine, the necklace patterned after the rosary; details from precolonial jewelry; Ifugao-inspired stacked brass bangles and rings.

Beyond restoring antique jewelry, she has developed her own style which is typified by Art Deco elements such as repeated symmetrical lines and geometric shapes.

Her signature color palette is restrained—white and yellow gold, black onyx and an occasional touch of coral.

Lagdameo grew up surrounded by the antique and tribal collections of her father, Salvador, a furniture maker. The family business, Selco Enterprises, produces customized furniture for such clients as Rockwell.

With such a creative and cultural environment, it seemed logical that she would end up studying at the Philippine School of Interior Design, where she recalls spending some of her best years.

The course included freehand and mechanical drawing. To this day, she practices her strokes.

The interior design program taught her discipline and research, art history and design principles which have become vital to her jewelry making.

Her design aesthetic—characterized by the use of organic materials, the play of light and dark, and simplicity—are reflected in her jewelry.

There is the oft-repeated story of how her father gave her the five pieces of the giniling, the brass bangles from Ifugaos. Wanting to fill up her forearm, she went to the artisans in Ifugao for more.

Dipped in 22 karats, the bangles have become popular among millennials, while baby boomers waxed nostalgic, recalling the bangles trend of the ’70s.

The 38-year-old designer wears the giniling bracelets like an amulet she can’t part with. Stacked on her finger is the giniling ring, an heirloom from an Ifugao octogenarian; a band from her father; and her customized band.

“I believe in odd numbers,” she says. “The more you use brass, the nicer the jewelry looks.”

One of her signature designs in the brass collection is an odd-number stack of five simple bands with a spinner ring in the middle. The coiled rings and the wide band which mimics the stack of rings are also popular.

When the Ifugaos make her brass jewelry, Lagdameo sees imperfections as providential. “Though there are bubbles, dents or sections that aren’t filled, I just let them be. They give character,” she says.

In the high-end line, the craftsmanship becomes the showcase, such as the white diamond ring set in a background of fine Art Deco lines. The band is also embellished with sampaguita patterns and bolita (round pellets) in antique gold from an old jewelry piece.

Plans are afoot to start a men’s line which she observes is an underserved market. Men have been asking her since they can relate to her bold proportions and clean lines, a contrast to the intricacy and delicacy of her antique restorations.

Most of the colonial-inspired jewelry and her contemporary creations are made by artisans in Batangas, Ilocos, Bicol and Mandaluyong.

Lagdameo loves the challenge of designing engagement rings and bespoke pieces. “I try to capture the client’s idea and create a story for someone else.”

One striking style is an Art Deco diamond ring with a white gold band, adorned with delicate repetitions of symmetrical lines. In designing the ring, she asks the man about his fiancée’s taste in music and a picture of her hands.

“I end up getting essays,” she says.

The engagement rings are statement pieces. “There’s nothing discreet about them while my antique jewelry features many tiny details,” she says. –CONTRIBUTED