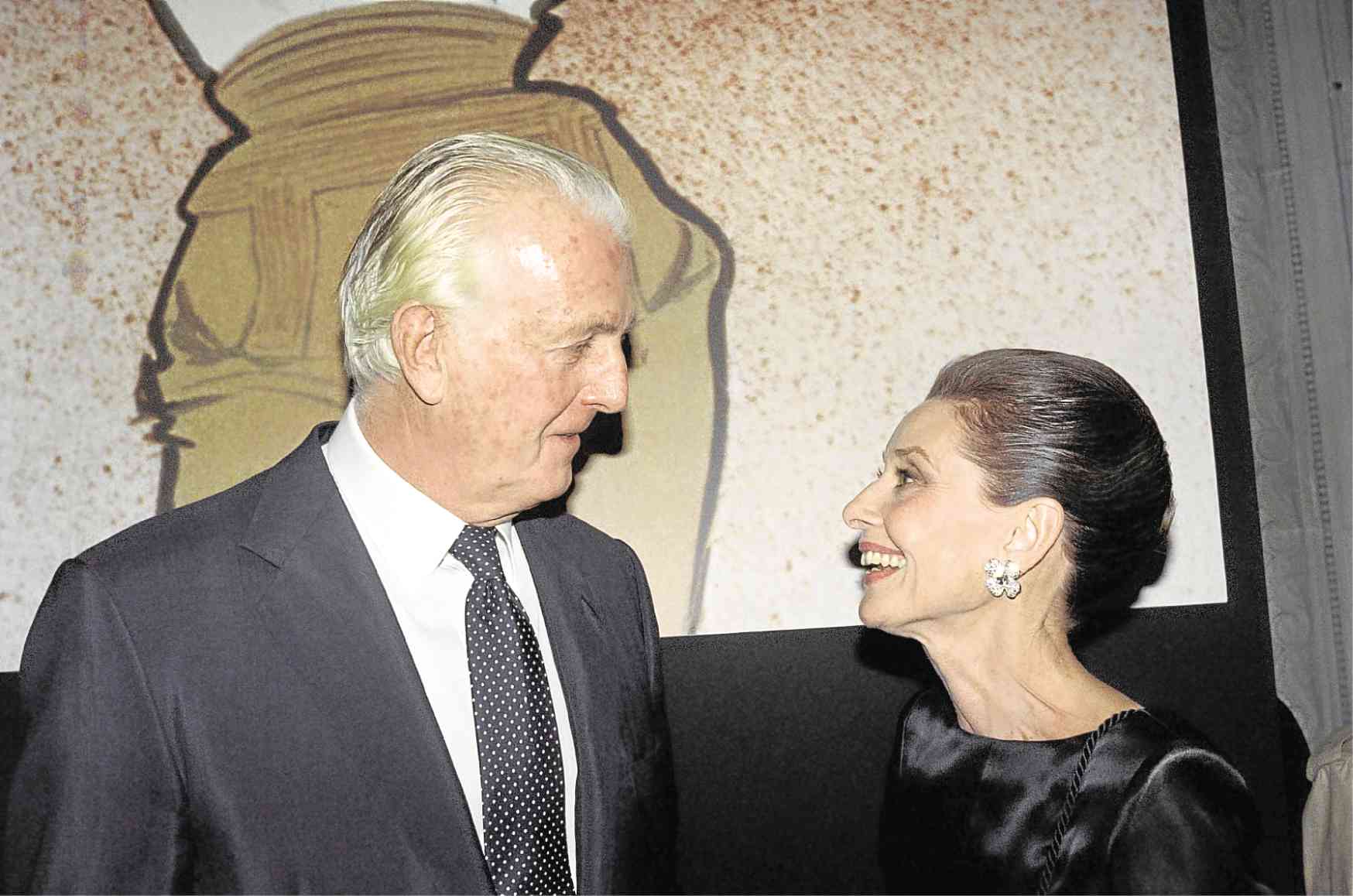 In file photo taken Oct. 21, 1991, Hubert de Givenchy and Audrey Hepburn talk at the Galliera Museum in Paris, during a reception honoring Givenchy for his 40 years in fashion. —AFP

There are few people I love more,” actress and style icon Audrey Hepburn once said of her stylist and lifelong friend, designer Hubert de Givenchy. “He is the single person I know with the greatest integrity.”

Hepburn died at age 63 in 1993, a good 25 years ahead of Givenchy, who passed away last March 10 at age 91. Romantics can certainly dream of a reunion in heaven for the duo who changed the world of fashion.

Hepburn’s aforementioned quote is one of many recorded in the lovely little book “Audrey and Givenchy: A Fashion Love Affair” by Cindy de la Hoz, published three years ago, and filled with gorgeous pictures of Hepburn in clothes Givenchy designed for her, and her alone.

Even their first meeting was a delightful, destined one, De la Hoz writes. Hepburn had just won the Best Actress Oscar in 1953 for “Roman Holiday,” although her fame had not yet reached Europe. Thus, Givenchy had never heard of the actress when Paramount, the studio producing her next film, “Sabrina,” and director Billy Wilder sent Hepburn to Paris to shop for clothes appropriate for her French-educated character.

She was 23, and Givenchy was 26, a rising star who had been director of the Elsa Schiaparelli boutique before opening his own house.

Hepburn was already a fan, having bought a Givenchy coat as a gift to herself after “Roman Holiday.” Givenchy, however, was expecting the wrong Hepburn in his atelier—Katharine Hepburn, the already famous actress.

As it turned out, Audrey waltzed in, blissfully ignorant of the mix-up, and tried on clothes off his racks. The fit was perfect; Givenchy was charmed and took her to dinner.

“The synergy between star and designer was affixed,” writes De la Hoz.

The very first Givenchy outfit Hepburn wore on screen in “Sabrina”: an Oxford-gray wool suit with what would be her trademark tiny waist, worn with a turban, hoop earrings, and low heels. Later on, she would mesmerize in an exquisite white ball gown with an overskirt and black embroidery, and for her date with Linus Larrabee, a black satin dress that debuted what would be forever known as the décoletté Sabrina or the Sabrina neckline, henceforth worn by women to show off gorgeous shoulders and collarbones.

The irony, De la Hoz writes, is that “Sabrina” won an Oscar for Best Costume Design, but Paramount’s director of wardrobe, Edith Head, got full credit. Although Givenchy never complained, Hepburn vowed to make it up to him—and how.

Her next film, “Funny Face” with Fred Astaire, was a sumptuous fashion festival, where Givenchy was acknowledged for “Miss Hepburn’s Paris wardrobe.”

The film included such looks as her pink and champagne gown with an elegant train, an exquisitely simple black ballerina dress, and Hepburn’s character Jo’s criminally chic fishing outfit—a white cropped top and slim pants, a wide pink satin sash for a belt, and matching pink flats. There was also the beautiful tea-length, cap-sleeved wedding dress that got brides running to chop inches off their gowns. And yes, Givenchy was acknowledged with the film’s nomination for an Oscar for Best Costume Design.

More winning looks followed: As Ariane, a cello student in Paris in “Love in the Afternoon,” she wore a suit with slim pants and a single breasted jacket, with a Peter pan collar peeking out. There was a bejeweled full-skirted dress, a slim dress with bows in the back, and a drop-dead, luxurious fur coat. “I’ve never even thought of myself as very glamorous,” De la Hoz quotes Hepburn. “Glamorous is Ava Gardner or Elizabeth Taylor, not me.”

And then, the film that made the universe fall hopelessly in love with Hepburn, in the clothes Givenchy dressed her in. Reunited in 1961 for “Breakfast at Tiffany’s,” where Hepburn played the unforgettable Holly Golightly, the pair gave the world the image of Hepburn in “a sleeveless black satin sheath dress, opera gloves, five-strand pearl necklace, and mini-tiara,” with oversized sunglasses, and having coffee and a Danish in front of the jewelry store.

More films and looks would follow: bright colors for “Paris When It Sizzles,” gorgeous outerwear for “Charade,” daring head-to-toe lace in “How to Steal a Million.”

Yet, even when Hepburn wasn’t wearing Givenchy, their 40-year friendship remained strong, all the way until her retirement and eventual death.

“In every collection, a part of my heart, my pencil, my design goes to Audrey,” De la Hoz quotes Givenchy.

The master was being modest; his brilliant creations certainly helped make Audrey Hepburn the most stylish star of all time. —ALYA B. HONASAN