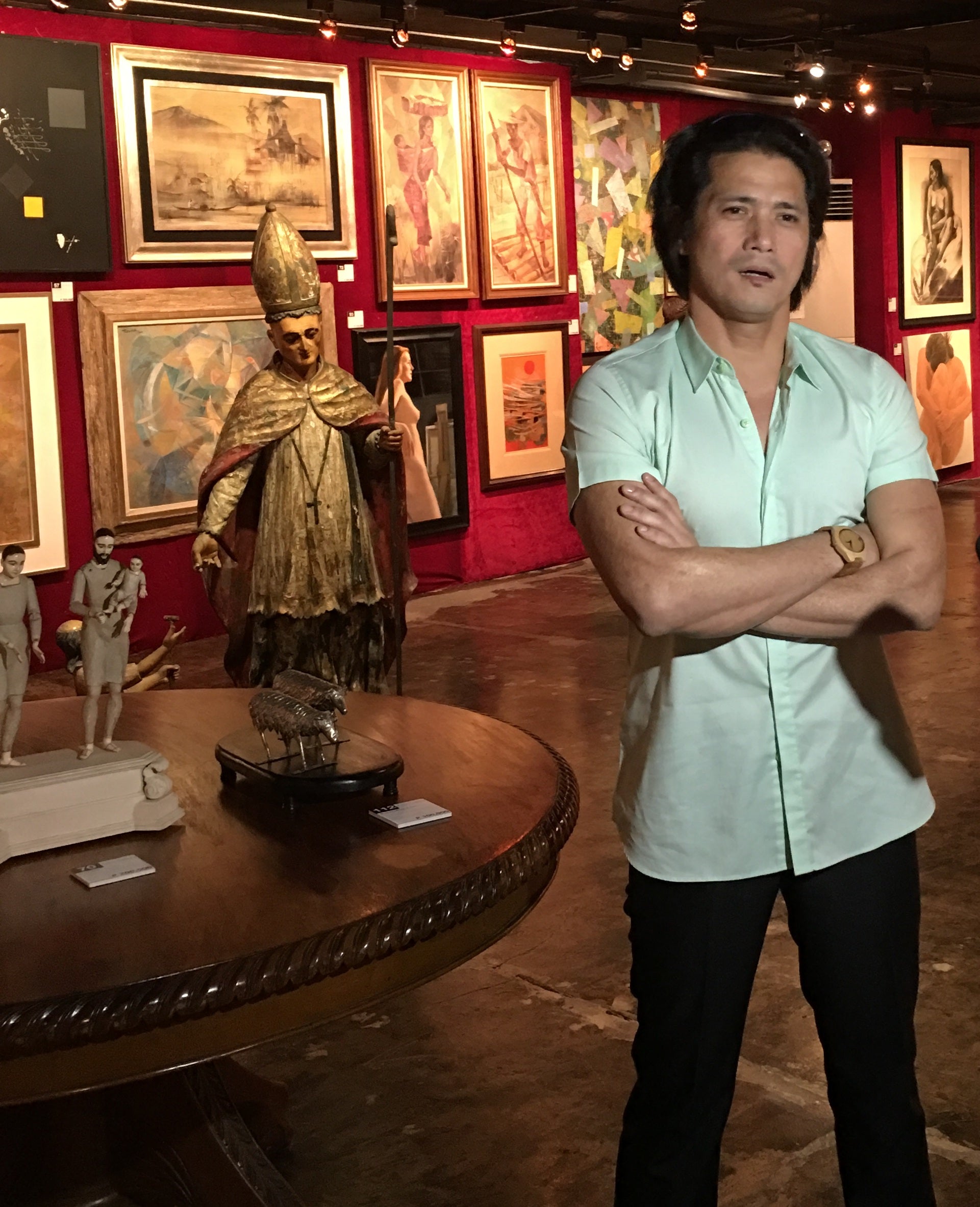 Robin Padilla at León Gallery during the March 3 auction

Up to now, Manila culture circles cannot stop talking about the León-Asian Cultural Council (ACC) auction last March 3 that posted several record sales and events, foremost of which was the auction of Jose Joya’s most celebrated abstract, “Space Transfiguration,” for a whopping P112.128 million, officially making it the most expensive Philippine painting.

Days before, during the auction preview on March 1, the cocktail reception saw the León Gallery branch in Eurovilla 1 in Legazpi Village, Makati packed to the brim.

During the auction itself, among the bidders was actor Robin Padilla, who bidded for the Andres Bonifacio letters but lost.

He said the sale of “Space Transfiguration” was “a world record for Philippine Modern Art.”

“Joya’s output was largely influenced by the Abstract Expressionists which was taking stage in New York in the 1950s,” explained the León proprietor.

Acclaimed and accorded a prize at the 12th Art Association of the Philippines (AAP) Annual contest of 1959, ‘Space Transfiguration” was Joya’s most favorite piece, he added.

The León owner pointed out that Joya (1931-1995) was the first grantee of the ACC. (Joya was named National Artist for the Visual Arts posthumously.)

“It was a showcase of pride and gratitude for both grantee and grantor as the sale corroborated the importance and relevance of foreign education and exposure for the artists,” Ponce de León said.

“Other world records for artists,” according to Ponce de León, included “Baclaran” by Emmanuel Garibay ( P1.95 million); “When Horses Gallop” by Andres Barrioquinto (P16.35 million); and the untitled work from the “Alibangband Series” by Danilo Dalena.

Marked by humor and sarcasm, Dalena’s 1990 oil-on-canvas work shows men relieving themselves in urinals. It was bought for P8.76 million.

Also an important piece was Anita Magsaysay-Ho’s 1960 oil-on-canvas “Tahip,” which was sold for P35 million. Characterized by the use of earthy tones, the painting shows peasant women hard at work.

Benedicto “BenCab” Cabrera’s 2002 acrylic-on-canvas “Sabel,” a recurring subject of a scavenger and homeless woman from the artist’s neighborhood, was sold for P7.59 million.

Another significant piece was Fernando Amorsolo’s 1954 oil-on-canvas “Lavanderas,” which fetched P4.67 million. The painting features women doing laundry on the riverside while the children play around.

Arturo Luz’s 1957 oil-on-masonite board “Venezia” rhapsodizes the city of Venice, evoked through minimalist lines and shapes. It was sold for P5.84 million.

Annie Cabigting 2015 oil-on-canvas “Black (After Ad Reindhardt at the Moma)” is a photorealist depiction of two women looking at Reinhardt’s painting. The painting fetched P8.18 million.

Meanwhile Robin Padilla bidded for the set of “explosive” letters by Andres Bonifacio on the Tejeros convention in 1897 that unseated the revolutionary leader, but the actor lost.

Padilla himself went to the auction to bid.

The four letters and the envelope with the Katipunan seal addressed to Emilio Jacinto, whom the Katipunan founder had appointed as army head in Pasig, had a starting bid of P500,000 each.

Provenance of the letters was the estate of Epifanio de los Santos, the historian and director of the National Library after whom Edsa is named.

Over all, the letters and the envelope were sold for P16.2 million, said Ponce de León.

Ponce de León refused to say if the letters were won by a single bidder.

“As you know, León is the soul of discretion,” he said. “We cannot answer any questions related to any bidder.”

Its hammer price was P5.6 million.

Ponce de León agreed with Nakpil, Padilla was devastated over his loss. “I let Lisa comfort him (Padilla),” he said

Measuring 32 inches, the 17th Centry Ivory Crucifix repatriated from Spain is the largest one in the Philippines today. It is also made from kamagong and silver. It was sold for P4.67 million.

The Isabela Tampinco armchair, made from narra and rattan, was bought for P3.50 million.

“The armchair stands on four feet carved in the shape of an inverted and truncated trunk of an areca or bonga palm emanating from a quadrant at each corner carved with a section of an anahaw leaf,” Tinio said.

Ponce de León said he was happy with the auction of antique furniture and objets d’art.

“The furniture did exceedingly well like the Isabelo Tampinco chairs of Maximo Viola and pieces from the collections of Ramon Villegas and Isauro Gabaldon,” the León owner said.

Over all the auction was a great success.

“León Gallery is truly grateful for all the attendees of the last ACC Auction that will benefit artists in the pursuit of excellence,” Ponce de Leon said. –CONTRIBUTED