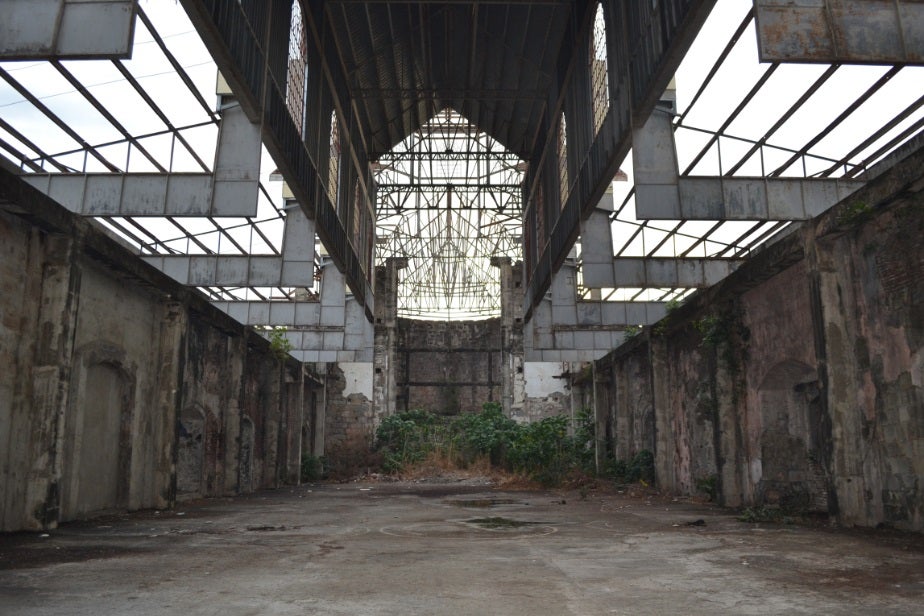 After a fire gutted the San Miguel de Arcangel Church in Camiling, Tarlac more than 20 years ago, efforts were made to repair and reconstruct the structure.

But to no avail.

The vestiges of that attempt are seen today—concrete posts, steel beams, and galvanized iron as roofing.

The ruins of the church, however, still lord over the town poblacion, but the structure looks more like an abandoned industrial building with encroachments reminiscent of post-war Intramuros churches.

A new concrete church has since been constructed on the Epistle side of the ruins with the new facade facing west perpendicular to the apse of the old church.

The ruined church of Camiling is one of only two surviving Spanish-era churches in Tarlac.

The other one is the church of Concepcion town, which was built toward the end of the 19th century.

However, what makes the Camiling church significant is the fact that it is the oldest in the province and before it was consumed by fire in 1997, it was the best preserved.

Construction of the church, which was under the great Dominican missionary order, was started by Fr. Juan Luis, OP, in the late 1840s. The church was inaugurated in 1863 during the term of Fr. Angel Gomez, OP, but was destroyed by the infamous 1880 earthquake.

The present church was constructed between 1879 to 1887 by Dominican friar-priests Salvador Millan and Balbino Ezpeleta.

This church became the site where General Pedro Pedroche and his men were killed by General Antonio Luna and his forces for alleged treason.

The church is neither marked nor declared by any national cultural agency but it is a presumed important cultural property under the National Heritage Act of 2009 since it is at least 50 years old.

Church historian and church heritage advocate Regalado Trota Jose said the church of Camiling was the most intact in the province and the Diocese of Tarlac.

He noted that it used to have four wooden retablo—three inside the church and one in the sacristy—plus a collection of canonical books of the parish.

The Camiling church complex needs to be fully documented since it is one of the significant buildings in the town which also has “interesting” stables and schools, Jose said.

Had not it been damaged by fire, the church complex could have been declared a National Cultural Treasure, he added.

Today, what remains of the 19th-century church is its shell and a fully functional adoration chapel.

However, overgrowths both natural and commercial have sprung up, particularly on the Gospel side and the apse of the church.

Vendors have occupied the area of the church’s façade, which is also utilized as an al fresco “comfort room” by men. Permanent structures have been erected on the Gospel side fronting the town’s public market.

The walls have been adaptively “reused” by business establishments with at least one store constructing its toilet right beside a buttress.

These developments on Camiling’s historic and most important religious edifice was compared to a cesspool by a church heritage researcher.

“The way they (church authorities) have virtually abandoned the ruins to stores and overgrowth is akin to letting it develop into a cesspool of human filth, just like in our beach resorts.” –CONTRIBUTED