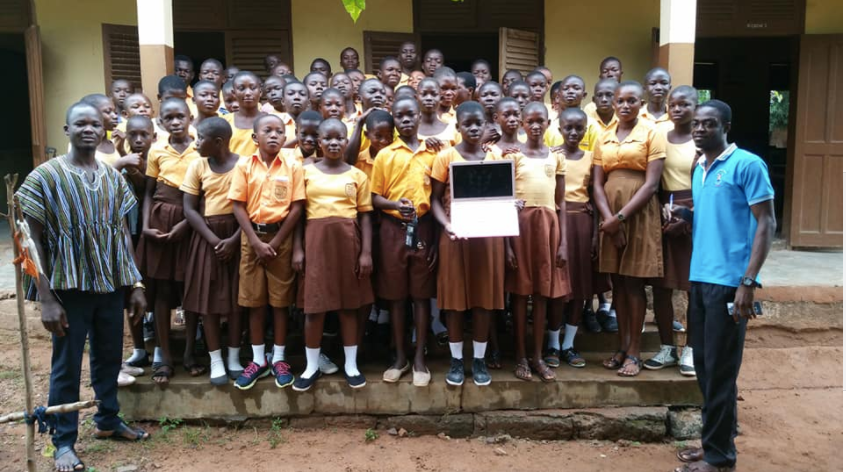 Last month, a teacher in Ghana, Africa touched the hearts of many the world over when he was captured teaching Microsoft Word to his students by only using a chalkboard.

Richard Appiah Akoto, Owura Kwadwo Hottish on Facebook, is an information and communications technology teacher in the Betenase M/A Junior High School in the Ashanti region of Ghana. Their classroom has no projector or computer, thus prompting him to teach everything by drawing with a chalk.

Akoto’s Facebook post reached the hearts of generous people, as he shared last March 8 a photo of him and his students, now with a laptop. “The staff and students of Betenase M/A JHS wishes to say a very big thank you to Amirah Alharthi, University of Leeds for donating a laptop to the school to enhance the teaching and learning of ICT.”

The blessings didn’t stop there. Days later, Akoto and his students received a second donation which came in the form of desktop computers.

“Second donation received,” wrote Akoto on March 12. “Five brand new desktop computers for the school. One personal laptop for #Teacherkwadwo.” Apart from the desktop computers, Akoto and his students also received three boxes of information and communication technology textbooks to aid them in their lessons.

Akoto also recently flew to Singapore where he attended the Microsoft Global Education Exchange Summit held from March 13 to 15. “Really appreciate all that you did for me in Singapore,” wrote Akoto in gratitude to the people of Microsoft. “Thanks for your true love and care. God richly bless you.”

Akoto is now back in Ghana from his Singapore trip, where he can now better teach his students, and putting their new computers to good use. JB

Teacher uses chalkboard to show students how to use ‘Microsoft Word’

Prof comforts student’s crying baby, carries it in his arms during entire lecture