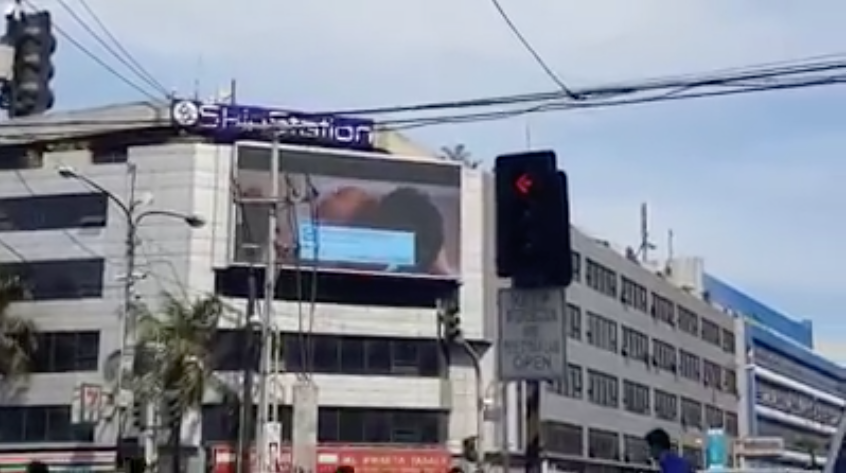 A pornographic video was shown on one of the digital billboards flagging the Executive Building Center in Makati Avenue, Makati City today, around 2 p.m. The spectacle was captured by a bewildered netizen named Mulong Sermonia who was inside a vehicle when he saw the video playing on the digital billboard.

When Sermonia realized what was happening, he took out his phone to record the display. In the video, a man can be seen on top of his partner, humping away. His face, however, was not shown thus making him unrecognizable.

It seems TeamViewer was used to show the video. TeamViewer is a computer software application used for Internet-based remote access and support, as well as file transfer and desktop sharing. Those who use the software can connect to any computer or server from afar as if they were sitting right in front of it.

Sermonia told INQUIRER.net that he and his companions were laughing when they saw the video on the billboard.  “Natatawa na kami nang makita namin,” said Sermonia. A lot of people witnessed the scene too, including the passers-by and drivers of other vehicles. “Meron mga nakahintong naka-motor, yung ale napahinto at ibang mga driver ng van, L300 yata yun.”

(We were laughing when we saw it. Some who were riding motorbikes even stopped. A lady also stopped, and other drivers, including a driver of an L300 van, I think.)

Thus far, it is unknown whether the showing of the pornographic video on the digital billboard was a prank or made out of malicious hacking. It may just also be a product of carelessness from those in charge of the said billboard. JB