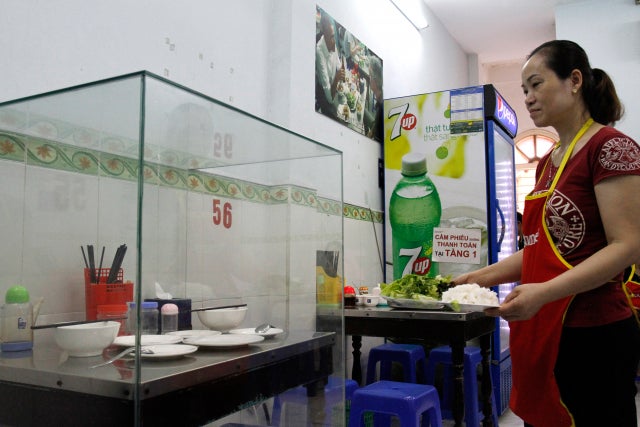 The table where former US president Barack Obama famously slurped noodles in downtown Hanoi has been preserved — chopsticks and all — under a glass box for eternity, in a move that has attracted legions of bemused diners to the once low-key eatery.

Bun Cha Huong Lien restaurant, since dubbed “bun cha Obama”, shot to stardom in 2016 when the then-US leader took a break from official duties on a Hanoi visit to enjoy a $3 bowl of pork noodles with fried spring rolls with globetrotting chef Anthony Bourdain.

Now customers are thronging to the hotspot for a taste of that famous evening.

“I’m very happy to sit near the table where President Obama once sat because I love Obama very much,” office worker Tran Dinh Ha told AFP during the busy lunch rush.

Business has boomed ever since the presidential pork dinner.

But the owner insists she isn’t dining out on the Obama fame and has resisted offers from customers wanting to buy the table, instead freezing the dinnertime tableau for posterity.

Lien wouldn’t say whether the dishes on display are the ones used by Bourdain and Obama, who she described as “modest and friendly”.

The transparent box is a form of preservation, and reverence, familiar to Hanoians: Vietnam’s much-praised revolutionary leader Ho Chi Minh is embalmed and encased in glass at his mausoleum in central Hanoi.

Still, not all of Lien’s customers welcomed the stunt with open arms.

“Not sure how I feel about this,” Bourdain said on Instagram under a photo of the table at which he apparently once sat. NVG