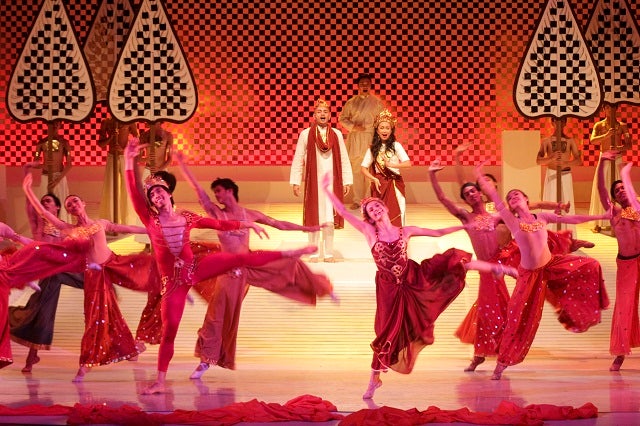 Ballet Philippines’ 2012 “Rama Hari” is the most nominated and most awarded production in Gawad Buhay history. —PHOTO FROM BALLET PHILIPPINES

When the Philippine Legitimate Stage Artists Group, Inc. (Philstage) started the Gawad Buhay Awards in 2008, there were only nine member companies competing in 23 categories. Ten years later, the awards now have 15 professional companies vying for some 40 trophies.

The jury—an independent panel of critics, scholars, artists and theater enthusiasts—has changed as well. Of the 16 current members, only two were part of the 2008 roster.

This year, 36 individuals are first-time nominees, comprising roughly 40 percent of individual nominations. In anticipation of the 10th awards ceremonies, on April 12 at the Cultural Center of the Philippines’ Tanghalang Aurelio Tolentino, here are 10 notable achievements in the Gawad Buhay books:

1. Ballet Philippines’ (BP) “Rama Hari,” adapted by Bienvenido Lumbera from the Indian epic “Ramayana,” is the most nominated and most awarded production in Gawad Buhay history, winning 14 of its 22 nominations in 2012. “Rama Hari’s” trophy record is trailed by Tanghalang Pilipino’s (TP) “Mabining Mandirigma,” with 12 wins in 2015, while the Philippine Educational Theater Association’s (Peta) “Care Divas” follows the nomination tally with its 19 nods in 2011.

2. Rody Vera holds the most number of competitive wins by an individual, with seven out of 11 nominations. Three are for his Filipino adaptations of the classics: TP’s “Tatlong Mariya” (Anton Chekhov’s “Three Sisters”) in 2010 and “Der Kaufmann” (Shakespeare’s “The Merchant of Venice,” from a prior translation by the late Rolando Tinio) in 2013; and Peta’s “Arbol de Fuego” (Chekhov’s “The Cherry Orchard”) in 2015. In 2013, he also won for his co-direction of “Der Kaufmann” with Tuxqs Rutaquio and for the libretto of Peta’s “D’Wonder Twins of Boac.” Moreover, his libretto for the Francis M musical “3 Stars and a Sun,” co-written with Mixkaela Villalon, was 2016’s lone nominee and automatic winner. And for his performance in TP’s “Stageshow” in 2012, he tied with Noel Rayos (for “Rama Hari”) for Featured Actor in a Musical.

6. BP’s “Encantada” remains the only production to have swept all four design awards in a single year, for Salvador Bernal’s set and costume designs, TJ Ramos’ sound design and Batalla’s lighting design in 2011.

7. Only one musical production has won all four acting categories: Repertory Philippines’ (Rep) “Sweeney Todd” in 2009, with Audie Gemora and Menchu Lauchengco-Yulo in lead performances, and Marvin Ong and Liesl Batucan in featured parts. A similar sweep has been achieved by only one nonmusical production: Peta’s “Bona” in 2012, starring Eugene Domingo and Edgar Allan Guzman, with Olive Nieto and Juliene Mendoza also winning for their featured performances.

10. The winners for Production, Direction and Ensemble Performance have gone to the same show nine times. Before Best Production was divided into “original” and “existing” material, the match was achieved by TP’s “Golden Child” (2008), “Care Divas” (2011) and TP’s “Stageshow” (2012). After the said division, “Der Kaufmann” attained the same feat in 2013. When Best Director was further split into the musical and play categories, the match was achieved five more times, by Rep’s “August Osage County” and Peta’s “Rak of Aegis” in 2014; “Mabining Mandirigma” and The Necessary Theatre’s “The Normal Heart” in 2015; and Full House Theater Company’s “Annie” in 2016.

Note: Years indicated in this article refer to the season a particular production was part of. Awards ceremonies are held the year after. —CONTRIBUTED