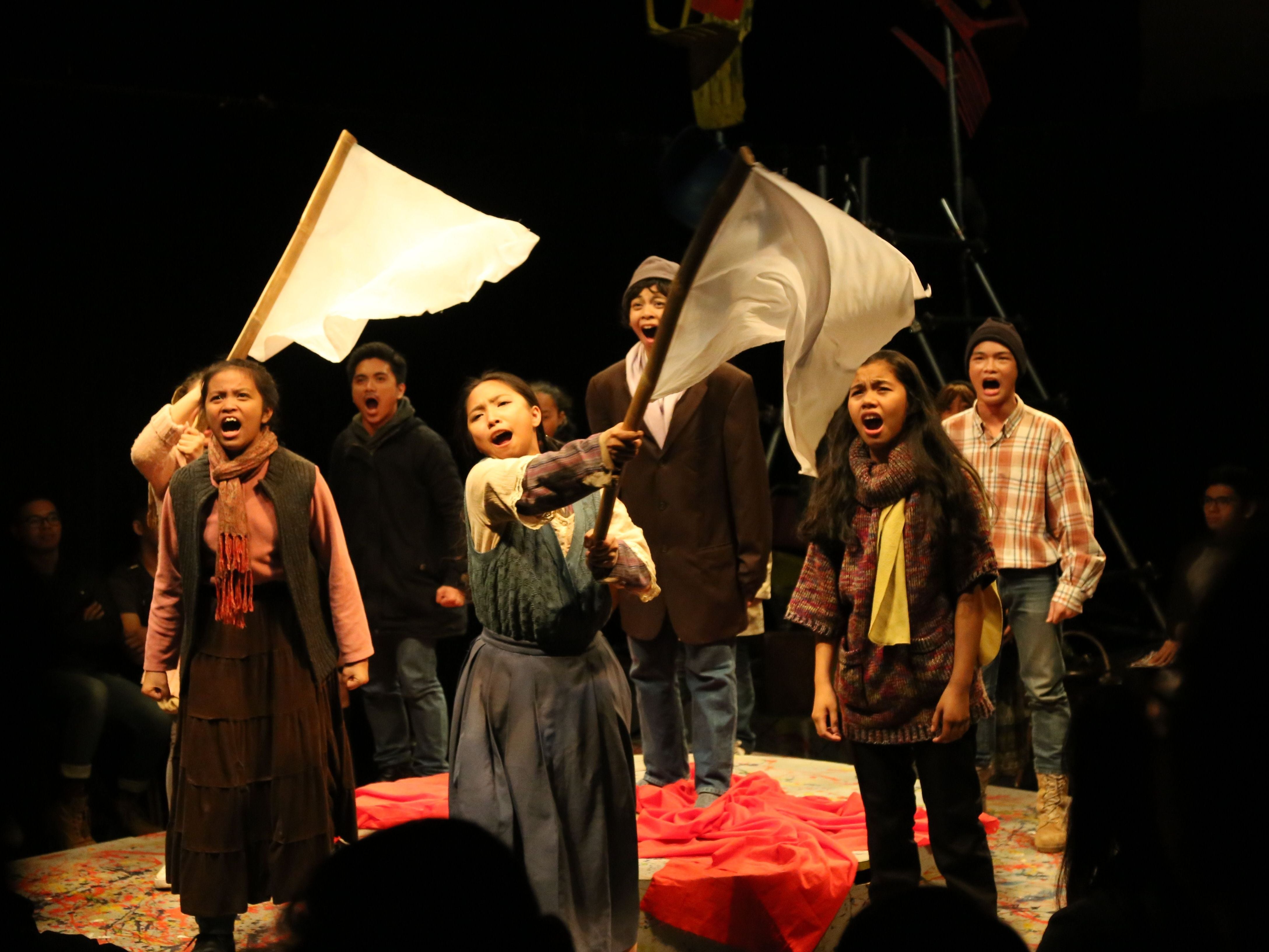 The Philippine High School for the Arts’ (PHSA) production of “Nagwawalang Gubat”—Guelan Luarca’s translation of Caryl Churchill’s “Mad Forest,” staged two weekends ago at the Cultural Center of the Philippines’ Tanghalang Huseng Batute under JK Anicoche’s direction—was a play by young people that, in its surprising acuity, power and fury, proved to be a must-see.

That is so especially today, when peaceful revolutions like that of the Edsa People Power uprising have been forgotten or are taken for granted. Tech-fueled uprisings like the Arab Spring and the Wall Street protests can also lull us into thinking that social media whipping up a public storm is enough to bring about a bloodless transition.

But “Nagwawalang Gubat” was a grim reminder that many of the basic freedoms people now enjoy were nonexistent only 30 years ago. Written in 1989, Churchill’s three-act play chronicles the bloody rebellion that ousted Romanian dictator Nicolae Ceausescu. But, far from ending on an optimistic note, the play shows the now liberated people of Romania grappling with haunting, bitter questions left unresolved by the revolution.

The first and third acts illustrate the lives of two intertwined families during and after the Ceausescu era: the Vladus, who have been marked by the state because of a daughter’s “treacherous” marriage to an American; and the Antonescus, whose instinctive tendency to collaborate has enabled them to survive various authoritarian governments.

After a slow and ponderous start, the various snapshot-like vignettes of the first scenes would coalesce to unveil the full picture of the Romanians’ ordeal: the constant surveillance by the secret police, resulting to widespread fear and paranoia; nepotism favored over merit, industry and integrity; the Catholic Church’s valiant struggle to protect its flock; the endless food ration lines and economic misery; and so on.

The fulcrum and tipping point of these preceding events come in the middle act, when the populace reaches its breaking point and explodes in revolt. Churchill’s text uses actual testimonials to present various real-time eyewitness accounts of the revolution. A young rebel helplessly watches the slow, agonizing death of a friend caught in a crossfire. A young girl swings from hope to horror as her other militant-friends enter the fray. A neighborhood spy refuses to apologize for the crimes of the state, even as the tide turns against him.

Remarkably, even as this intense, highly political play was being played by high school kids, members of PHSA’s theater group Dulaang Sipat Lawin, Anicoche’s steady, unsentimental direction occasioned not one single false note. The students delivered a powerhouse ensemble performance that was certainly equal to the abilities of more seasoned university theater actors.

Some of Churchill’s allegorical touches worked, and some did not. The supernatural dialogue between a collaborator and the specter of her equally complicit late grandmother, or the appearance of a duplicitous angel to soothe a desperate, broken priest, fit neatly into the narrative. But the occasional appearances of Dracula—a creature of legend based on an actual figure in ancient Romanian history—to herald the wave of bloodlust spreading throughout the country felt blunt and disruptive.

Still, the parallelisms between the oppression and struggle for freedom in 1980s Romania (their revolution came three years after Edsa) and the newly emerging threats to liberty in today’s Philippines were all too apparent. It is heartening to see that this production was mounted by thinking, committed young people, whose recognition of the signs of the times might just help prevent sordid history from repeating itself. —CONTRIBUTED