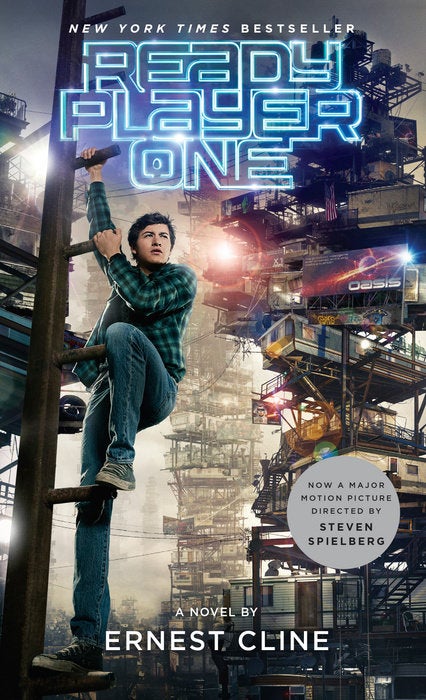 ‘Ready Player One’ is the ultimate geek pleasure

It is 2045. “It was the dawn of a new era, one where most of the human race now spent all of their free time inside a video game,” writes Ernest Cline in his now-iconic debut sci-fi novel, “Ready Player One” (Broadway Books, New York, 2011, 582 pages). “Things used to be awesome, but now they’re kinda terrifying.”

Even as the world’s environment is dying, humans have retreated into the Oasis (Ontologically Anthropocentric Sensory Immersive Simulation), an all-encompassing virtual reality where  social interaction and commerce occurs. But when James Halliday, the quirky creator of the Oasis dies, he leaves behind a challenge. He has hidden an Easter egg somewhere in the Oasis, and whoever finds it gets not only an inconceivable fortune, but ultimate power over the Oasis.

Dubbed the “egg hunt,” the quest for Halliday’s prize now drives many people. This includes the teenager Wade Owen Watts (yes, his initials spell out “WOW”), who puts his considerable creativity and gaming prowess to solve the first of Halliday’s puzzles.

But hot on his heels is the omnipresent conglomerate IOI (Innovative Online Industries). Led by the ruthless Nolan Sorrento, IOI’s operatives (dubbed the Sixers) are cheating by putting together all of their resources into finding the egg, clearly against the gaming spirit that Halliday championed. Indeed, the Sixers would resort to anything—including blackmail and murder—to gain complete control over the Oasis.

Luckily, Wade—known in the Oasis by his username Parzival—is up to the task and determined to find the egg the way Halliday intended to. Together with his comrades Art3mis, Aech, Daito and Shoto, Wade takes the reader on a journey of puzzle-solving.

The novel takes its name from the three words that meet the user before entering the Oasis (and a phrase avid gamers are truly familiar with). “Ready Player One” is structured as a series of mini quests Wade must solve.

In that sense, Cline is very much like Halliday in that he has created an immersive geek paradise of his own. Cline has loaded “Ready Player One,” from beginning to end, with references to literally every form of fandom imaginable in 2011. These wonderful references fly at the reader on every page, mostly through Wade’s narration. In fact, pop culture knowledge is essential in successfully completing the egg hunt. In general, Wade has to apply his knowledge of essentially all pop culture to emerge victorious. In specific, he has to apply his knowledge of 1980s movies, Dungeon & Dragons and video games to win.

Cline’s prose is dense but gifted with super speed. Readers will find themselves pulled forward at light speed by Cline’s plot, all the while amazed by just how much trivia the author has crammed in here. The adventure starts in a very narrow space and just keeps expanding until its gigantic final act. Wade is a winning protagonist, as his asides and observations are as entertaining as the action (both real and virtual) in the book.

It is also eerily prescient. It discusses the nature of corporations and the Oasis (mirroring things like Facebook’s relationship with the internet), individual freedom in the digital age and even Bitcoin. “Ready Player One” will probably prove even more prescient in the future.

It should not be surprising then that “Ready Player One” has been adapted into a massive motion picture by no less than Steven Spielberg (himself referred to several times in the book) in a Warner Bros. release on March 31.

Reading like a mix of “Inception” and “The Matrix,” “Ready Player One” is original while nodding at all of its inspirations—and there are many. There are many novels considered essential to sci-fi history: H.G. Wells’ “The Time Machine,” Jules Verne’s “20,000 Leagues Under the Sea,” Frank Herbert’s “Dune,” Douglas Adams’ “The Hitchhiker’s Guide to the Galaxy,” among others. One can now add Cline’s “Ready Player One” to that list, a sci-fi masterpiece that uncannily reflects the era it was conceived in.

Whether readers experience the novel before or after they watch the movie adaptation does not matter. Ernest Cline’s “Ready Player One” is not to be missed.  “Whenever I saw the sun, I reminded myself I was staring at a star,” he writes. “One of over a hundred billion stars in our galaxy.”