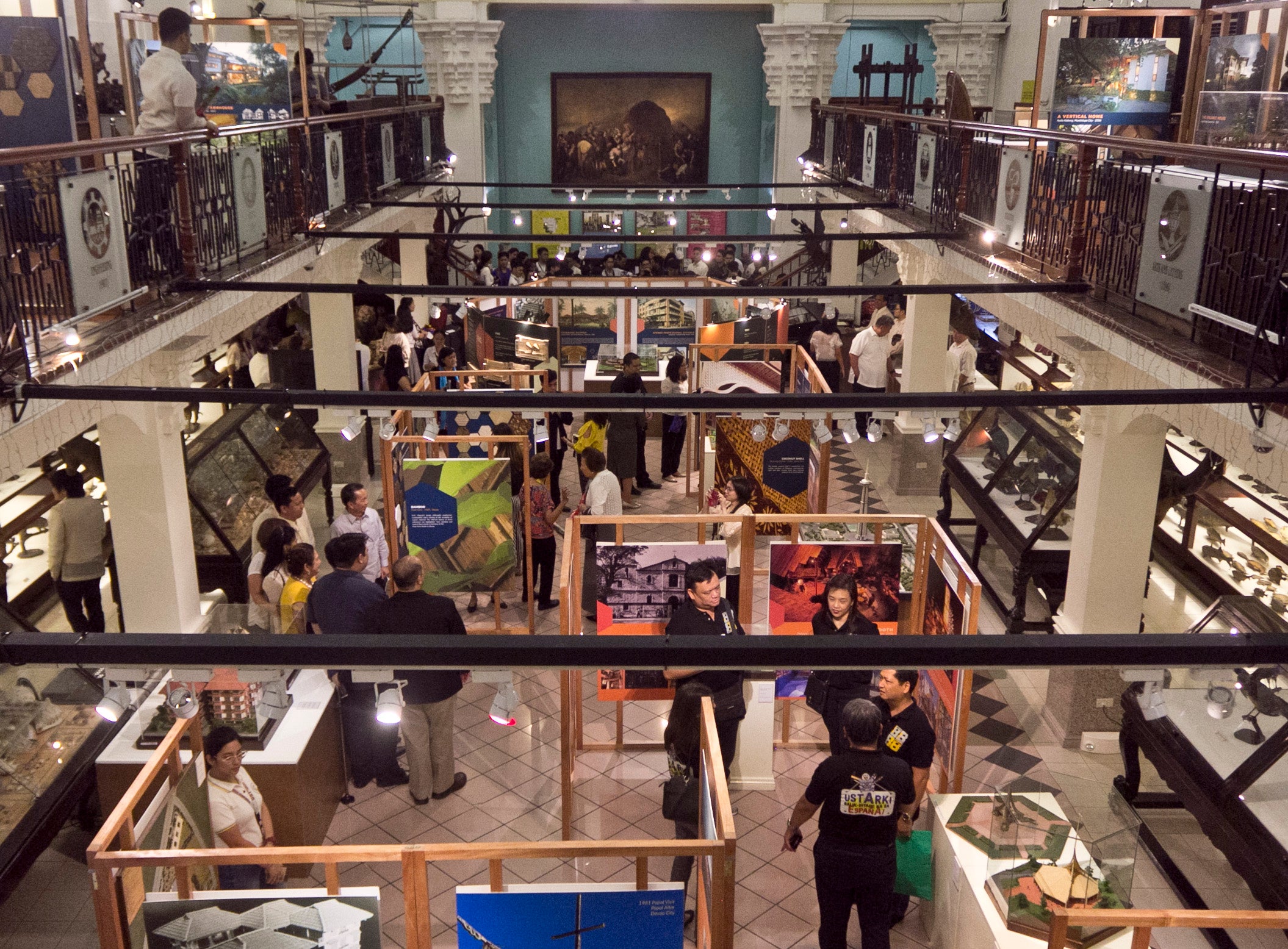 Friends, family and former colleagues join the opening of Mañosa’s exhibit at the UST Museum.

Francisco “Bobby” Manosa’s pioneering achievements in Philippine modern vernacular architecture are in full view in an extensive exhibit at the University of Santo Tomas Museum of Arts and Sciences, which is running until April 6.

Although a traveling exhibit sponsored by the National Commission for Culture and the Arts and curated by architecture scholar Gerard Lico, the exhibit is billed as a homecoming exhibit, especially since Manosa is a graduate of the old UST College of Architecture and Fine Arts (the two programs have since been separated). Its title is “Visionary Comes Home: A Manosa Beyond Architecture.” The exhibit is facilitated by UST faculty member Rizalito Mercado.

The exhibit is divided into six parts.

Meanwhile, “Likas at Likha” shows how local materials and processes contribute to established Philippine identity in structures. Examples would be the use of lahar in Mañosa’s “Bahay Pinatubo” and of course, the use of coconut bark and other parts in the celebrated Coconut Palace. This should underscore that concrete and hardwood are not the only viable building materials. Mañosa’s inclination in using endemic building materials are also shown in other works in the exhibit.

“Tagpuan at Ugnayan,” shows how buildings, when designed well according to its purpose, foster correct and even war social relationships.

“Danas at Aliwalas” shows how aliwalas (lighthearted feeling) is a major design consideration in Mañosa’s works and how his designs approximating such a feeling has been beneficial to the users of his edifices.

Meanwhile, Laro at Hiraya shows deviation from Mañosa’s typical architectural works. This part of the exhibit includes various Filipino-inspired toys such as the Bobi trucks and the tipaklong (grasshopper). This portion shows Mañosa’s abounding creativity and versatility.

Finally, “Usbong at Yabong” is the most intimate part of the exhibit. It shows Mañosa in his formative years as a student at UST and in his early years as an architect.

UST Museum director Fr. Isidro Abaño, OP, said the exhibition was both a homecoming and a celebration of Manosa’s works.

“The University takes pride in architect Mañosa as he becomes an acclaimed icon in the world of architecture, both here and abroad,” Father Abano said.

“We pray that his works serve as an inspiration for the students, especially when they start practicing.”