'The Handmaid's Tale' getting its own fashion exhibition | Lifestyle.INQ ❮ ❯ 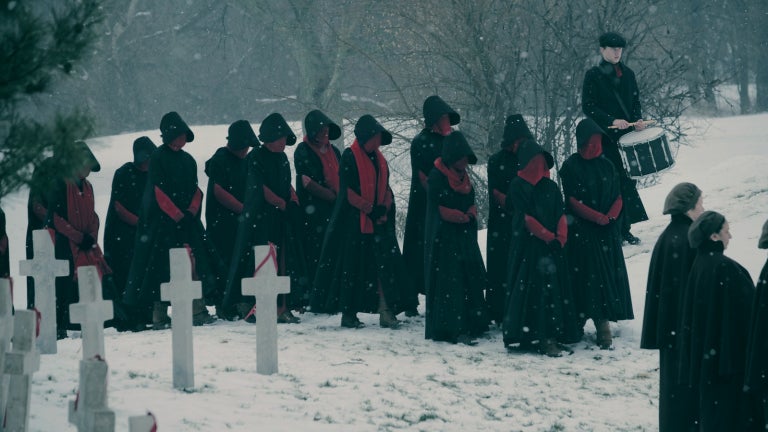 ‘The Handmaid’s Tale’ getting its own fashion exhibition

TV show “The Handmaid’s Tale” has made its mark on audiences all over the world, and now it is set to get its own fashion exhibition in the United States this spring.

More than 40 costumes from the first and second seasons of the Emmy and Golden Globe award-winning series are set to go on show at the SCAD FASH Museum of Fashion + Film in Atlanta, Georgia, next month, led by The Savannah College of Art and Design (SCAD). The exhibit will open on April 30, running through Aug. 12.

Designer Ane Crabtree, who was nominated for a 2017 Emmy for her work on the dystopian show, was closely involved in setting up the exhibition with the museum.

“Ane Crabtree is someone who can tell stories with clothes, and the impact the show’s wardrobe has had in the political conversation around the world has been groundbreaking, but honestly not surprising,” said Bruce Miller, creator of “The Handmaid’s Tale”. “She’s a genius, and fabulous human being, and we’re thrilled that SCAD is honoring her work.”

“Throughout America and now even throughout the world, women have chosen to wear the Handmaid’s costumes to give voice to their protests for women’s rights,” added executive producer Warren Littlefield. “It’s very fitting and gratifying that SCAD has chosen to honor her work.”

Season two of “The Handmaid’s Tale”, an adaptation of Margaret Atwood’s 1985 novel of the same title, is set to come to Hulu from April 25. The platform will host a screening of “The Handmaid’s Tale: Season 2, Episode 3” on April 30 at SCADshow in Atlanta to celebrate the launch of the exhibition, followed by a Q&A discussion with some of the show’s cast and producers. JB