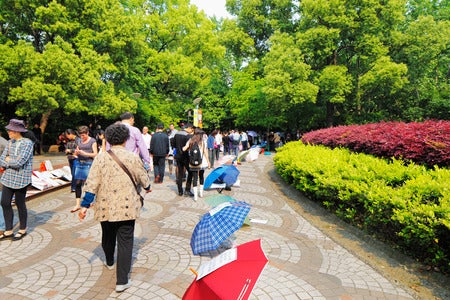 People's Park in downtown Shanghai is known as a marriage market where parents of unwed grown-up children go to advertise and set their sons and daughters up on dates. INQUIRER.net stock photo.

At just 34 years old, Chinese photographer Guo Yingguang was likened to property, “a nice house in the countryside with an attractive look, but too aged.” The comment was made when Guo took a trip down the “marriage market” in Shanghai last summer to look for dates, but was constantly asked, “How old are you?”

This is the fate of China’s “sheng nu,” a derogatory term that refers to “leftover women” or women who remain unmarried in their late twenties and beyond. It seems that in China, a woman over 30 years old is no longer welcome in the dating market.

The Shanghai marriage market in the People’s Park is famous as a venue where parents of unwed grown-up children go to look for dates for their sons and daughters, according to a report by South China Morning Post last March 25.  It was there that Guo filmed her experience, capturing comments from parents with the use of a hidden camera.

Guo worked as a photojournalist for China Daily and Reuters before studying arts in London at the age of 30 years old, after breaking up with her boyfriend of nine years. During that time, she felt miserable about herself. “I lay on my bed for several days, staring at the ceiling and thinking my life was over,” the report quoted her.

But Guo soon realized that being single means being free to pursue her ambitions. The free-spirited and bold women she met in the British capital inspired her and helped her gain confidence and self-esteem to go against conventional and traditional Chinese values.

Meanwhile, it took her ten more visits to Shanghai’s marriage market before she could finish her book of photographs titled “The Bliss of Conformity”, which focused on taboo topics such as planned marriage and leftover women.

Guo’s project resonated with the country’s women who were just like her: educated, well-traveled and independent, but single. There seems to be a belief that women need to get married and have children in order to achieve happiness, and that singlehood is the worst thing that could befall a woman. Moreover, there also seems to be a harsh cutoff when it comes to age, when the once, desirable woman stops being beautiful and becomes “invisible,” usually when she reaches middle age.

Guo, however, goes beyond the confines of tradition. She said, “I want to let more women know that you don’t have to care about what others think and you have the right to live out your own life. The only one who can judge us is ourselves.” Cody Cepeda/JB