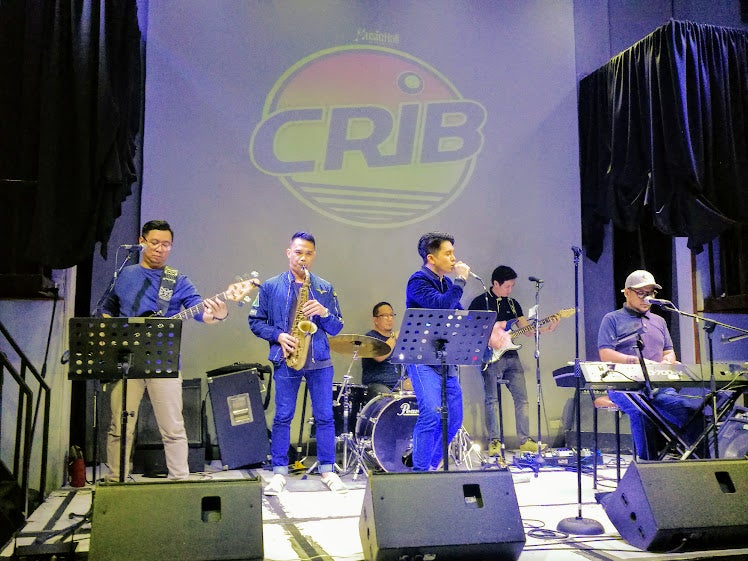 What makes Crib stand out from the usual cover bands is the vibrancy of its sound—De Leon’s sax, Enriquez’s guitar, and Caleda’s keyboards and vocals infusing more life to an otherwise lame pop tune.

The night I caught the band’s gig at The Music Hall, some of the members’ friends—the Black Cows’ Pido Lalimarmo, Bolichie Suzara, and Gibson Viduya—jammed on a couple of numbers, including “Me and Mrs. Jones” and “Let’s Stay Together” with Thor Dulay on vocals.

Bonfire Grill is a bar and restaurant at Riverbanks in Marikina that also features live gigs. But the band can sound so loud that makes talking with your companions difficult.

Fortunately, the place, incidentally owned by my high school classmate Bob Robles, has a second floor where the noise is somehow diffused and which offers a relaxing view of the Marikina River.

The night I visited Bonfire with three other high school classmates, Ed Lorenzo, Mike Mendoza and Neil Santo Tomas, we had such a good time that we stayed till 4 a.m.

Heaven’s Barbecue is a 24-hour eatery in Bonifacio Global City that has outlasted many clubs, bars, and other dining places in the area. Reason is that it serves comfort food with consistency and quality.

Order the pork or chicken barbecue with ice-cold beer and you won’t feel the need to go anywhere else.