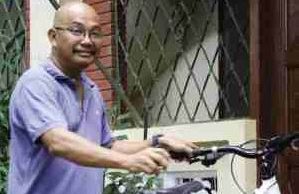 Bike for life and peace: A priest’s unusual devotion

For two weeks, Redemptorist Fr. Amado “Father Picx” Picardal biked along the edges of the country’s highways not to compete, but to call for people to choose the path to peace and respect for life.

Dubbed as “Bike for Life and Peace,” Father Picx’ journey spanned about 1,500 kilometers from Baclaran Church in Parañaque City to Iligan City, the entry point for war-torn Marawi. It called for an end to extrajudicial killings under the government’s bloody anti-illegal drug campaign, the resumption of peace talks with the communist rebels, and the lifting of martial law in Mindanao.

These advocacies may be too big a call, but for Father Picx, small acts like this contribute to the collective efforts that “awaken the conscience of the nation” and bring goodness in the country.

“We have to follow the Way of the Cross, the Cross is the way of peace, and guidance. We have to make sure that we hold the body of life,” the 63-year-old activist-priest said in a telephone interview with INQUIRER.net on Wednesday.

During his ride, Father Picx fasted during the daytime and preached in the parish churches where he stayed during the night. He was accompanied by fellow biker, Chito Generoso, and also welcomed by local bikers in areas he had passed through.

This was not the first time Father Picx biked across the country. The first was in 2000, when he biked for peace from Davao to Pagudpud in Ilocos Norte, then in 2006, he rode his bicycle around Mindanao. In 2008, he traveled about 5,000 kilometers from Davao to Aparri and back, and in 2014, he did a climate-related promotional ride from Manila to Mindanao to raise awareness about the aftermath of super typhoon Yolanda.

But in this fifth and probably his final bicycle journey, Father Picx has never felt such urgency to call to choose peace and respect life. As the death toll of the government’s brutal campaign rose, all the more the people needed to become aware of the things happening, he explained.

“This time it is more urgent. Of course I was aware with the threat to my life. And you know, the body count [caused by the crackdown] is increasing,” he said.

Father Picx, a former parish priest in the district of Bajada in Davao City, has long been aware of the threats to his life being a long-time critic of the administration’s iron-fist method of curbing crime and criminality.

But this was not a reason to fear—instead, it was a greater reason to feel that he was not alone all throughout his journey.

“I’m very much aware that I am not alone because I am being accompanied by the Divine protection. I am never afraid the whole time even though I am aware of the dangers, the threats to my life,” the priest said.

There is no better way to end Father Picx’ public life of prayer, preaching, and advocacy but a 1,500-kilometer bike ride for life and peace. And as he capped off his journey in Iligan City on Thursday, the priest prepared himself to embark on a new odyssey of life in solitude, silence and prayer as a hermit to continue living for the Lord. /jpv/ac