A 60-year-old gay woman confesses—and what the priest tells her is a surprise | Lifestyle.INQ ❮ ❯ 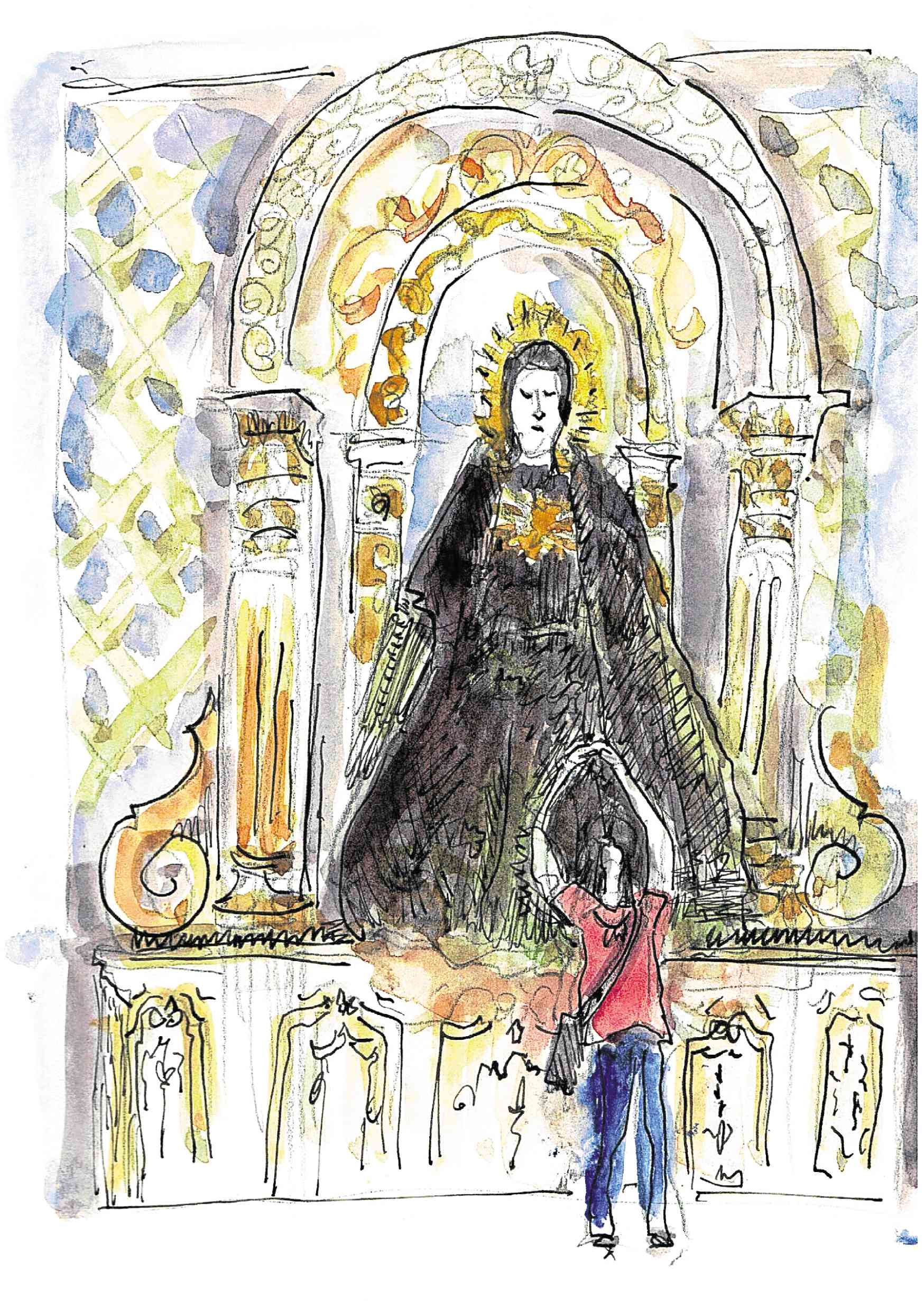 I am a lesbian, and I left the Catholic Church in 1975, right after high school, when I read the Vatican’s severe declaration against us homosexuals.

Approaching my late teens, I was ready for the world, to fall in love and be loved. It was both a torturous and fun time. But as midlife approached, I came back reluctantly to the Church, and marked that return by confessing to a Redemptorist priest I had met abroad.

It was an impulsive comeback, perhaps a calling. The confession was not planned; the priest had just given a Lenten talk in a Toronto church, waiting for someone to purge herself, like me. How could I even remember all the willful evil that I did, my sins of omission for 25 years since I left the Church?

I was terrified, but the confession went well, even if all I could remember saying was that I was gay and I wanted to come back to my home faith.

And then I heard the absolution: “Go now and sin no more. Your sins are forgiven.” I cried—but that didn’t change my core. I still struggled with same-sex attraction, although at middle age it seemed milder. It felt like the cycle of sinning and confessing would linger on until the end, and I left it at that.

It took a long time again to go back to confession, when I returned home from abroad and joined a lay Catholic order. We were given semi-annual retreats, followed always by confession or consultation with a priest.

I lived in multicultural and multireligious Canada for 16 years and actively ventured as a spiritual tourist, mostly in the Eastern religions and the more hospitable Anglican church.

Catholic to the core

But my early education was Catholic, and I realized that, try as I did, I was a difficult case for integration into another faith. I was still Catholic to the core. I start my travels with the sign of the cross, and I find the holy water comforting. I sleep better with a crucifix in my room. There is always a saint to call for every problem under the sun. And when a fire erupted in a house across my bedroom, I still called on the God of my childhood for help.

After realizing I was still a basic Catholic, I attached myself to a nearby priory of a religious order, where I just walked from home for my spiritual formation. It was an economic decision as well. Their chapel and the other churches were never too far for walking, and the diets were not as restrictive as in other spiritual practices.

Retreats were always held around the Lenten and Advent seasons, and confessions and consultations always followed. Confessions had changed since high school.

In our group, the claustrophobic confessional boxes with a screen to mask the penitents’ identities have been replaced with two chairs, where both could have a face-to-face conversation.

Sometimes, there was a door for privacy. But many times, it was done sans walls, just a few meters away from the waiting line of seated penitents, as long as it was reasonably away from earshot of the others.

Since I had committed myself to this spiritual path, even with much hesitation, I still tried the semi-annual purging—the same way that, when your guru told you that chanting worked, you sang the Sanskrit lines. Or that garlic is an aphrodisiac that disturbed the prayerful brain, so you removed the stimulant. An inverted posture like the headstand was said to work wonders for the thyroid, so you struggled and balanced without question.

My Catholic formator told me to confess, and so I did. At first it was like preparing for a thesis rebuttal, but as the years went by, the sins became too familiar, like a karaoke favorite. You can just confess the tune.

In time, I also learned to adjust to my confessor. Does he look homophobic? How old is he? What’s his nationality?

In the beginning, I would wait until I was the last penitent because I was too nervous to be an early bird. I would take a peep and watch how the other retreatants looked after their priestly encounters. In the beginning, too, I always cried at the thought of how unfair it was to always tell somebody I was sorry for being gay. And there were times when I didn’t feel like a sinner at all.

Pride, you know. I felt I was now on the right path. I was still attracted to the same gender, but I removed married women from my targets. Also, I could arrest lustful thoughts more quickly now. The truth was that, I was no longer lusting after women so much as I aged.

The spiritual path was getting easier because the appetite had been diluted; plus, I had also been wronged, jilted, abandoned. After suffering all manner of human betrayal, the divine way seemed like peanuts. And so, twice a year, I kept confessing.

Sometimes the priest’s reactions would be so abstract that I would leave the confessional wondering what the hell had happened. Many diocesan priests were also from countries like Vietnam and India, and in a reverent manner, I just wanted to tell them, “English, please,” even if, in fact, that was what they spoke. Sometimes, after checking out a priest, I would blurt out right away, “I am gay, Father”—and the confession would get personal immediately.

I’ve been confessing for nearly a decade now. The absolutions have been varied—the elementary Our Father, Glory Be and Hail and Holy Mary; sometimes the whole rosary; sometimes works of mercy.

Change in the air

Lately, though, something is changing in the air. I’m feeling a sudden leniency in the way Catholic priests are handling the gay confessor. A few weeks before our Advent retreat, I told the priest that I met a woman and wanted to covet her.

“Father, I am gay and I like somebody.” The priest said something about gay marriage being out of the question within the Church, but that a committed and loving gay relationship was all right.

Although my confessions were becoming conversational and easy with practice, I never expected approval this way. Whether the priest said go ahead or stop, I would have followed my heart anyway. But I enjoyed this confession and left the confessional smiling. I must have even forgotten my penance.

Several months thereafter, that love grew and I started a gay relationship after being unpartnered for a very long time—more than a decade of questionable celibacy. Since I was now in a relationship, I wanted to try a priestly consultation, which could be a confession, too, but generally took longer.

And so I was back in the setup. “Father, I am gay and I met somebody.” And what he said next took me by surprise. “Kayo na ba talaga? Sigurado na ba kayo?” My tearful, bewildered Catholic eyes widened. “Kung kayo na, go tell your families.”

I was the only party there. I couldn’t answer for my girlfriend. I am nearly 60 years old. I was unsure my girlfriend could answer this, because she was more Catholic than I—orthodox sarado—struggling not only with guilt, but with internal homophobia. In gay parlance, I was the butch and open type, she the femme, bi-curious kind.

“Do you feel guilty about it?” he asked.

“No Father,” I said. “I waited for a long time for this to come into my life. It is the purest thing I could ever feel for somebody. I love her more than my life.”

I thought my next question was important, but he dismissed it. “How do I go about it in my religious group? To be open?”

“That’s a different one,” he said. “A sin is a willful act. If it is just lust and you go from one to the next, that’s a sin. Remember that the two of you are now family. You can even adopt.”

Adoption is the farthest thing from our minds. I am a rescuer of animals, but not of humans. But here was the priest saying that adopting can be done at any age.

“Do you have a priest friend?” he continued.

“No, Father. Since I am in a monastic organization, my friends are mostly monks.”

“Then consult them, but whoever you talk to must be your friend,” he stressed.

And then he asked: “What made you think it is a sin?”

“It has always been the Church’s standard,” I said. “Love the homosexual, but hate the sin.” He said that the Church is not always perfect, and the teachings have been based largely on history.

I told him I had thought about joining the Anglicans, a “rainbow” church. “And why did you return?” he asked.

“Because I still believe in a Catholic God. My childhood God. My home God.”

Going back to the closet

Many of my friends, in fact, chide me for going back to an oppressive church, and calls my journey a “going back to the closet.” I had been told by a nun to go seek treatment after hearing from the elders in my community that I was still acting on my sexual tendencies.

“But, Sister, when I fall in love I go crazy. And if I wasn’t here, I would be Buddhist!” I told her. She took me once more, and my formation continues to this day.

The last thing the priest told me was this: Some people will not understand us, but forgive them anyway.

After being the one to always say sorry all these years, it was my turn to hear the apologies. I must have entered the wrong room, I thought. What is happening now, and how in the world did my confession turn out this way? Has the Church changed? Was the priest himself gay? Was it because of Pope Francis?

I am not sure myself. I could roam the churches in the metro and do mock confessions all over to gauge the current trend, but I don’t want to do that. Whether I got lucky and ended up with the real Jesus—who these priests represented anyway—I was finally hearing the confession that has eluded me my whole life.

Is the Church opening up to us and enticing us back? In many ways, I also feel abused and tricked back, but I forgive anyway. It is Lent—what else is there to do? —CONTRIBUTED