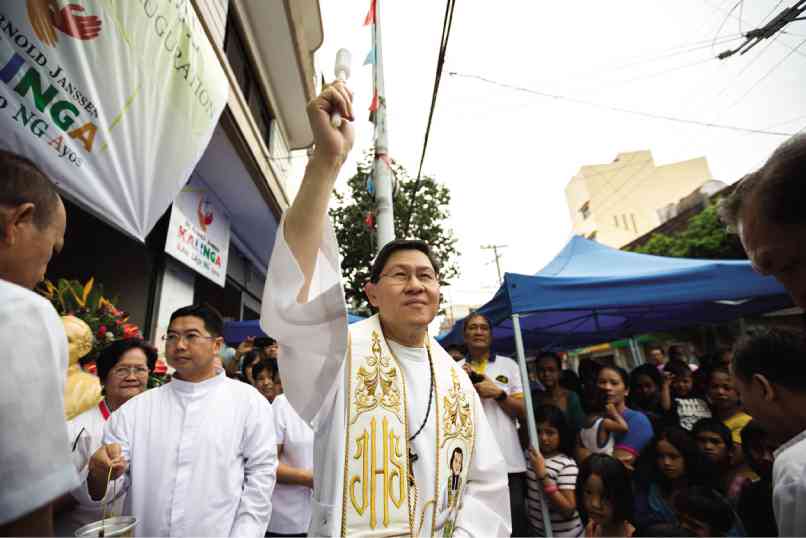 MANILA Archbishop Luis Antonio Cardinal Tagle blesses the Arnold Janssen Kalinga Center at the Catholic Trade Center of the Society of the DivineWord (SVD) in Tayuman, Manila, on July 16. Joining him are Fr. Flavie Villanueva (left) and Fr.Nielo Cantilado, superior of the SVD Central Province in the Philippines.

In the bloody drug war, the Church shows another way

Manila Archbishop Luis Antonio Cardinal Tagle said that any move to do away with differences in society in the name of uniformity is nothing but “dictatorship, bullying.”

“Sometimes,” he said on Holy Monday in his talk at St. James the Great Parish in Ayala, Alabang, “we think of unity as uniformity, we think the threat to unity is diversity. Not true. Even in food, the ingredients have to be diverse to be tasty.”

When one’s talents or charisms are not developed and used for the common good but rather for self-interest, there is division and “another wound” is added to the body of Christ, said Tagle. “Let the community be one big table, a feast of blessings. Do not crucify Christ again by a divisiveness that wastes the gifts to us.”

He noted that all are called to “be a people of communion in our diversity.”

Pointing to apostle St. Paul’s teachings, he said unity is achieved by “focusing on Christ.” Disunity happens when this focus is lost, resulting in “petty loyalties.”

“Who carried the cross and was nailed to the cross?” asked Tagle. “Why are we loyal to those other than Christ? Why do we substitute Christ for people who are not even our Savior?”

The Holy Spirit, the divine source of diverse gifts, intends for these gifts to be used not for personal preferences, not for “idols,” he said.

To illustrate his point, Tagle referred to a program that gathers people of diverse talents and callings to handle the drug problem in the country. The program offers a new approach different from the previous ones that resulted in violent deaths. The program has found that the diverse gifts and resources in a community can heal 90 percent of drug addicts, so that very few need confinement in an institution.

Tagle said parishes have offered their resources to rehabilitate drug dependents, taking a major role in this campaign alongside the police, the barangay and the Department of Health.

“At first, takot ang pari,” Tagle noted. But the program has so far been successful. Last October, 155 recovered drug dependents graduated from the program. Last week, 33 more graduated in one parish, and this week, two other parishes joined the program.

“In the parishes where the program opened, there are volunteers for counseling and catechists give Bible lessons,” he said. Former rugby sniffers are now rappers whom their grandparents listen to.

The archdiocese of Manila has started a religious formation for the police, a revelation that drew applause from the audience.

“We must use our gifts in the spirit of serving the common good. It is a lonely journey if you do it alone, and it won’t be completed. We have to be co-journeyers. We must not take separate trips. We are only someone because of God’s grace.” —CONTRIBUTED