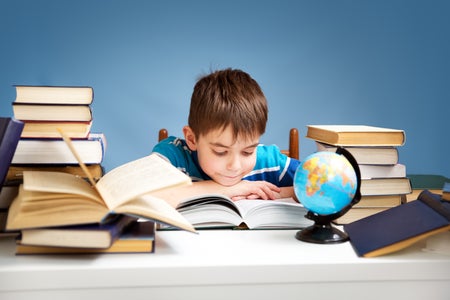 Monday, April 2 marks International Children’s Book Day 2018, which aims to promote and inspire a love of reading among children around the world. Reading is not only a source of joy for both children and parents, but also has many added health benefits, whether books are read alone or together as a family. Here we round up some recent research on the benefits for children’s health, development and imagination.

A 2015 United States study which looked at the effects of different toys on children’s learning found that traditional toys, including books, were more effective in increasing the quantity and quality of language than modern electronic toys. The small-scale study looked at 26 children aged 10 to 16 months, and found that along with traditional toys, such as wooden puzzles and shape-sorters, reading encouraged “a rich communicative interaction between parents and infants,” with parents talking more and using more vocabulary associated with themes in the book than when playing.

Research presented at the 2017 Pediatric Academic Societies Meeting suggested that reading to children as babies could boost their literacy skills for years to come. The researchers found that mothers reading to babies during early infancy boosted language, vocabulary and literacy skills, with results lasting up to four years later. In addition, the team also found that the quality of the books read strongly affected early reading skills, while both the quality and quantity of books read had a strong impact on children’s later literacy skills, such as being able to write their name at age four.

A small-scale 2015 study of 19 preschoolers aged 3 to 5 years old showed for the first time that reading during early childhood appears to have a measurable and positive effect on the brain. After measuring how much parent-child reading the children were exposed to at home, the researchers took MRI scans of the children’s brains while they were listening to stories via headphones. They found that children exposed to more reading showed increased brain activity in the areas critical for oral language and reading, as well as the areas linked to mental imagery, which can boost children’s imagination and enable them to “see” the story.

Norwegian research which looked at 1,171 first-grade pupils and their parents found that children whose parents read to them in early childhood and who grew up in homes with lots of books were better-prepared to learn to read when starting school, in part due to having a larger vocabulary. Children who were read to before age two, and who had access to plenty of children’s books had a vocabulary that is almost twice that of those who have less books at home and who were only read aloud to after the age of four years, added the researchers. A wide vocabulary helps boost children’s reading, and ups school performance, as children understand more of what is happening and find it easier to keep up in class. JB

‘Avatar: The Last Airbender’ comic books to be released