Illustration shows how the Sierra Madre, the biggest mountain range in the country, serves as inspiration of the wavy silhouette of the new Clark International Airport terminal 2.

Perhaps, for the first time, modern Filipino architecture will have its imprint on a major Philippine airport, as the tandem of Budji Layug and Royal Pineda creates the architectural concept for the Clark International Airport Terminal 2.

“The modern Philippines will finally manifest itself to the world,” architect Pineda puts it succinctly.

Design is at the forefront of redeveloping Clark in Angeles, Pampanga, as the country’s model of a progressive city.

Among the firm’s key projects is the upcoming Clark International Airport Terminal 2.

The Clark redevelopment is a project of the Bases Conversion Development Authority, with its president and CEO Vince Dizon and chair Greg Garcia,

Budji+Royal is doing the architectural concept design of the new terminal in collaboration with the Hong Kong-based consultant Integrated Design Associates. The project is with Megawide.

The Budji+Royal firm is defining Clark’s urban planning and architecture based on its advocacy of Modern Filipino architecture and design—as the concept will be branded hereon.

Pineda says, “Although we Filipinos respect international standards, some of their solutions are specific to a foreign setting. As Filipinos, we must take charge of our vision. We can open up to the world to collaborate and learn the best practices but apply them in our context.

“Once we create solutions and articulate them in our designs, they can become the modern Filipino standards for architecture. Other tropical countries can study how we are doing it. We are trying to generate innovations so that we can share them with the world. We can produce distinctly Filipino designs which make us authentic.”

The design bears a sense of place—the soul of the country.

Envisioned as an architecture landmark in Pampanga, the terminal will have a façade inspired by the wavy silhouette of Mount Arayat, which is 16 kilometers away from Clark, and the Sierra Madre, the country’s largest mountain range. 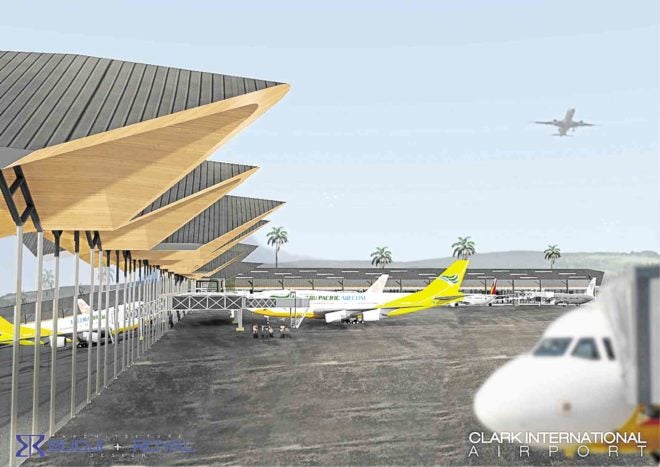 The airport will also showcase the use of advanced and sustainable materials.

Travelers will get around the terminal faster, see more views of nature and encounter less physical barriers.

“Apart from the architecture, we want to celebrate the culture of Filipinos—we greet and send off our loved ones. So the planning takes into account the comfort of well-wishers and greeters,” says Layug.

The sendoff and welcome sections are open areas, with gardens called the Tropical Plaza at the entrance of the new terminal. There will be restaurants where people can relax while waiting for the arrivals.

“The plan reflects the warmth of Filipinos,” says Pineda. “This concept was an offshoot of our rehabilitation of Naia 1 in 2011. We are bringing this concept as our main DNA in what makes the Filipino airport distinct. Present your culture beautifully and efficiently so that the world will appreciate it.”

The project is also rethinking the concept of luxury. “We have been timid for a long time. It’s about time we went bold but practical. Being bold doesn’t mean that we will overspend. A government building can be practical imbued with the new luxury of Filipinos—space, openness, lightness and not expensive materials,” says Pineda.

The ridged roofline of the sprawling airport echoes the outline of the surrounding mountains. The roofline will use longspan metal and a glue-laminated (timber) structure often referred to as glulam.

The warm, tropical tones of the surface treatments let the structure blend with the landscape—an organic perspective, says Pineda.

As a nod to one of Pampanga’s famous cultural symbols, the parol or star lantern, the patterns of the lantern will be interpreted in the glulam.

The interiors will echo another cultural symbol, the bamboo.

It must be noted that Layug earned fame here and abroad in the late 1970s by modernizing the use of bamboo in furniture—a feat that landed his line at Bloomingdales in New York, a first for a Filipino.

Since then, the bamboo—its limitless potential—has been seminal in the evolution of the Budji Layug design.

Instead of using traditional bamboo, the Clark project will make prodigious use of sustainable glulam or structural engineered wood in the interiors.

“The coziness is achieved in the naturalness of the material,” says Layug.

Pineda stresses, “We didn’t want to create a cold terminal. We wanted the Filipino feeling. The interiors have the warmth of wood.”

The flooring will use locally sourced material, lahar from Mount Pinatubo. It will mimic a terrazzo or marble finish for an understated elegant look.

The pitched ceilings will create the grandeur of the outdoors. “They reflect the organic shape of the mountains. The different heights lend the feeling of dynamism and blending with the landscape. When you enter the space, you are in awe,” says Layug.

Pineda cites another design trademark of the firm—permeability or transparency and unimpeded flow of space. Vast expanse of glass will allow a majestic view of Mount Arayat.

The design is anchored on a function—to help alleviate the stress of visitors and travelers. The Clark terminal is to be completed in 2019.

Layug notes that when Filipinos leave the country, they are full of excitement on seeing new things abroad. But when they return, instead of feeling well-rested, they feel gloomy. “Everything looks so Third World,” says Layug.

For him, Clark Terminal 2 must herald a renaissance.

“This airport will make us happy to come home. Something like this signals that the Philippines is stepping up on its modernity. It will show the world that we are in business. Everybody will have pride that the country is moving forward,” says Layug. —CONTRIBUTED