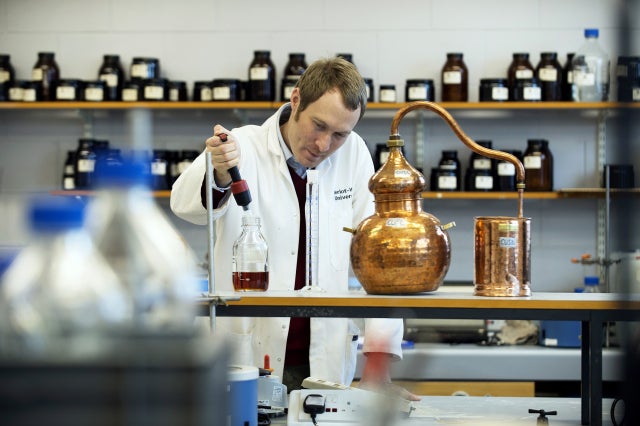 Assistant professor of distilling, Matthew Pauley (34) works at the International Centre for Brewing and Distilling which is based at Heriot-Watt University in Edinburgh, Scotland on February 28, 2018. Demand for more variety in Scotch whisky from fast-growing emerging markets and the request for lower alcohol varieties among health-conscious drinkers are challenging a closely guarded centuries-old tradition. Image: Andy Buchanan/AFP

Demand for more variety in Scotch whisky from fast-growing emerging markets and the request for lower alcohol varieties among health-conscious drinkers are challenging a closely guarded centuries-old tradition.

But it is operating within very tight restrictions as British law states Scotch must be at least 40 percent alcohol — which means distillers cannot reach out to health-conscious millennials or tap into the lucrative Middle Eastern market with lower or zero alcohol Scotch.

“There is a lot of interest in lower alcohol spirit drinks across the spirit sector to do with things like the Dry January craze and minimum pricing of alcohol,” Matthew Pauley, an assistant professor at Heriot-Watt University’s International Center for Brewing and Distilling, told AFP.

Pauley’s shelves are packed with herbs, spices and flavorings used in experiments with gin — but they are kept well away from the whisky stills.

Whisky with a hint of chocolate

“The SWA spend a lot of money sending people around the world collecting samples of things like random bottles of brown liquid with tartan on it, and there is a whole legal team who go and shut that person down.”

He also has bagfuls of an extra-roasted barley called “chocolate malt” which has proved controversial.

French-owned giant Glenmorangie markets a single malt Scotch called Signet which uses a hint of chocolate malt — but the Eden Mill craft distillery in St. Andrews abandoned its own chocolate malt product when the SWA warned it not to stray too far from the traditional Scotch flavor.

“It’s the extra flavors that the chocolate malt will add that the distillers are looking for and that the SWA have issue with,” said Pauley.

“The different roasts will potentially add different flavors so that is what is being investigated, researched and has come into some controversy.

“Some of the easy wins have been won, so people naturally start to look at some of the more left-field suggestions and line extensions, and we get back to the issue of how you make a line extension without harming the core brand.”

A spokesman for the SWA said there is no bar to producing new products based on Scotch whisky but “the marketing of such products must not confuse consumers in any way — in particular they must not suggest the product is Scotch whisky when it is not”.

The SWA said flavored whiskies are already marketed as liqueurs but must not be labelled Scotch, which has a similar geographical protection to Champagne.

“One would not add flavoring to Champagne and expect to trade on the reputation of Champagne by selling it as such,” the spokesman said.

“My own preference would be that we don’t see any dilution of the Scotch whisky brand, and we therefore need to be careful about going down the route of innovating too quickly,” he said.

Patrons in the Roseburn Bar, near Murrayfield rugby stadium in Edinburgh, were divided on the debate between tradition and innovation.

Sipping a dram of Aberlour, stonemason Alan McGuire, 53, warned that unpalatable innovations would “contradict the whole thing that whisky is”.

“It’s a beautiful drink that has been laid down for years, and to add something like ginger, or lemon or raspberry or something to it would just kill the brand,” he added.

But nurse Christopher Gauld, 35, said he is “a big believer in change”, as he sampled a trendy looking Islay malt called The Classic Laddie.

“The whisky we have today wouldn’t be the way it is if people didn’t try things in the past so I’m open to experiments,” he said. AB