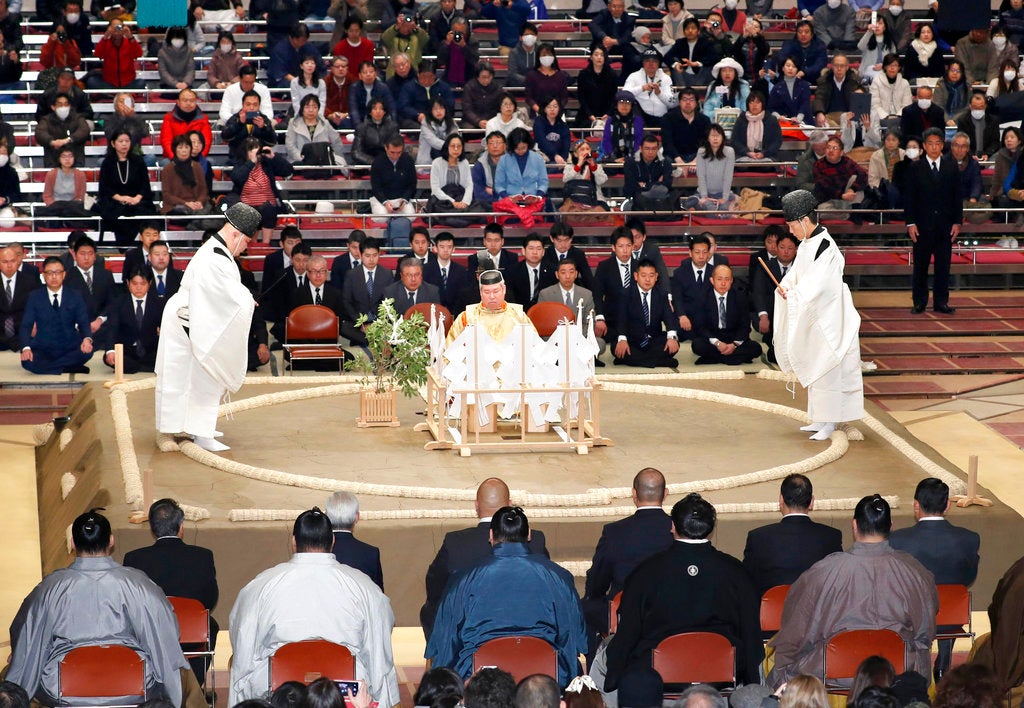 In this Nov. 11, 2017, photo, a Shinto ceremony is held to pray for the safety of sumo wrestlers before the start of the Kyushu Grand Sumo tournament in Fukuoka, southwestern Japan. Nobuyoshi Hakkaku, head of the Japan Sumo Association, apologized Wednesday, April 4, 2018 over an incident in which women first responders were asked to get out of the ring as they attempted to revive an official who collapsed in Maizuru, western Japan. In sumo’s tradition, the ring is considered sacred and women are prohibited from entering. (Kyodo News via AP)

TOKYO (AP) — The head of Japan’s sumo association has apologized over an incident in which women first responders were asked to get out of the ring as they attempted to revive an official who collapsed.

In sumo’s tradition, the ring is considered sacred and women are prohibited from entering.

That posed a problem Wednesday when Ryozo Tatami, the 67-year-old mayor of Maizuru in northern Kyoto, collapsed during a ring-top speech. Two women, apparently medical experts, rushed in and started performing first aid as several male sumo officials surrounding the mayor looked on.

When two more women rose to the ring trying to join the first aid effort, announcements demanded the women get out of the ring.

“Ladies, please get off the ring,” a sumo referee said, determinedly. “Only gentlemen go up.”

Footage posted on social media triggered outrage, with many criticizing sumo officials and saying they were choosing tradition over life.

Sumo chief Nobuyoshi Hakkaku called the announcement inappropriate and apologized late Wednesday, while thanking the women for working to save the mayor.

In a statement, Hakkaku said the announcement was made by an official who panicked after seeing the women in the ring, but never touched on the divisive tradition.

“It was an inappropriate response in a life-threatening situation,” Hakkaku said.

The mayor, who had an acute cerebral hemorrhage, survived and was in stable condition Thursday after receiving emergency surgery at a hospital, city officials said.

The footage posted on YouTube was shown on major Japanese networks and other media as the news topped headlines Thursday.

“Of course it is important to protect tradition, but the way it excludes women perhaps is out of step with the times, and that’s how I feel as a woman,” said Yurika Mita, a newscaster on a Fuji Television Network talk show. “Without the women’s effort, the life of one person might have been lost.”

Sumo’s male-only tradition has raised controversy for decades, with even top women politicians barred from honoring winners in the ring. AB