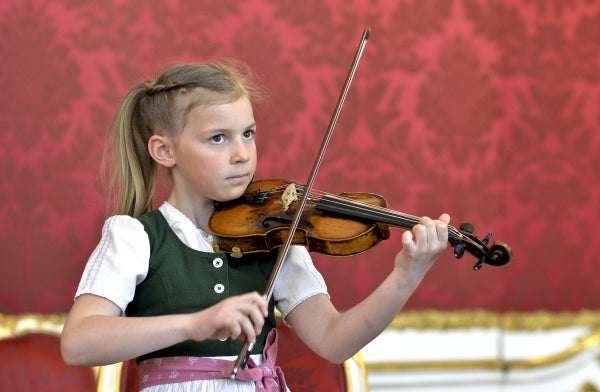 The violin that Mozart used as a child left Friday for a state visit by Austrian government members to China, where a seven-year-old girl will play it for President Xi Jinping.

The girl, Anna Caecilia Pfoess, “will accompany us… as a musical ambassador and represent Austria as a land of culture,” President Alexander Van der Bellen said.

“She will do it quite brilliantly, I am sure,” Van der Bellen told reporters before the 200-strong delegation of politicians, business people and others departed.

“#Music is a common language understood and appreciated the world over,” he added on Twitter alongside a photo of the grinning seven-year-old clutching the instrument and wearing traditional Austrian garb.

The violin is believed to have been made in the 1740s and until 1820 belonged to Mozart’s sister Maria Anna, nicknamed Nannerl, also a child prodigy.

Since 1896 it has been in the collection of the Mozarteum Foundation in Salzburg, and is normally on display at the museum in the house where the composer was born.

Listening to Mozart can lower your blood pressure

A Mozart coup for Hiyas Hila