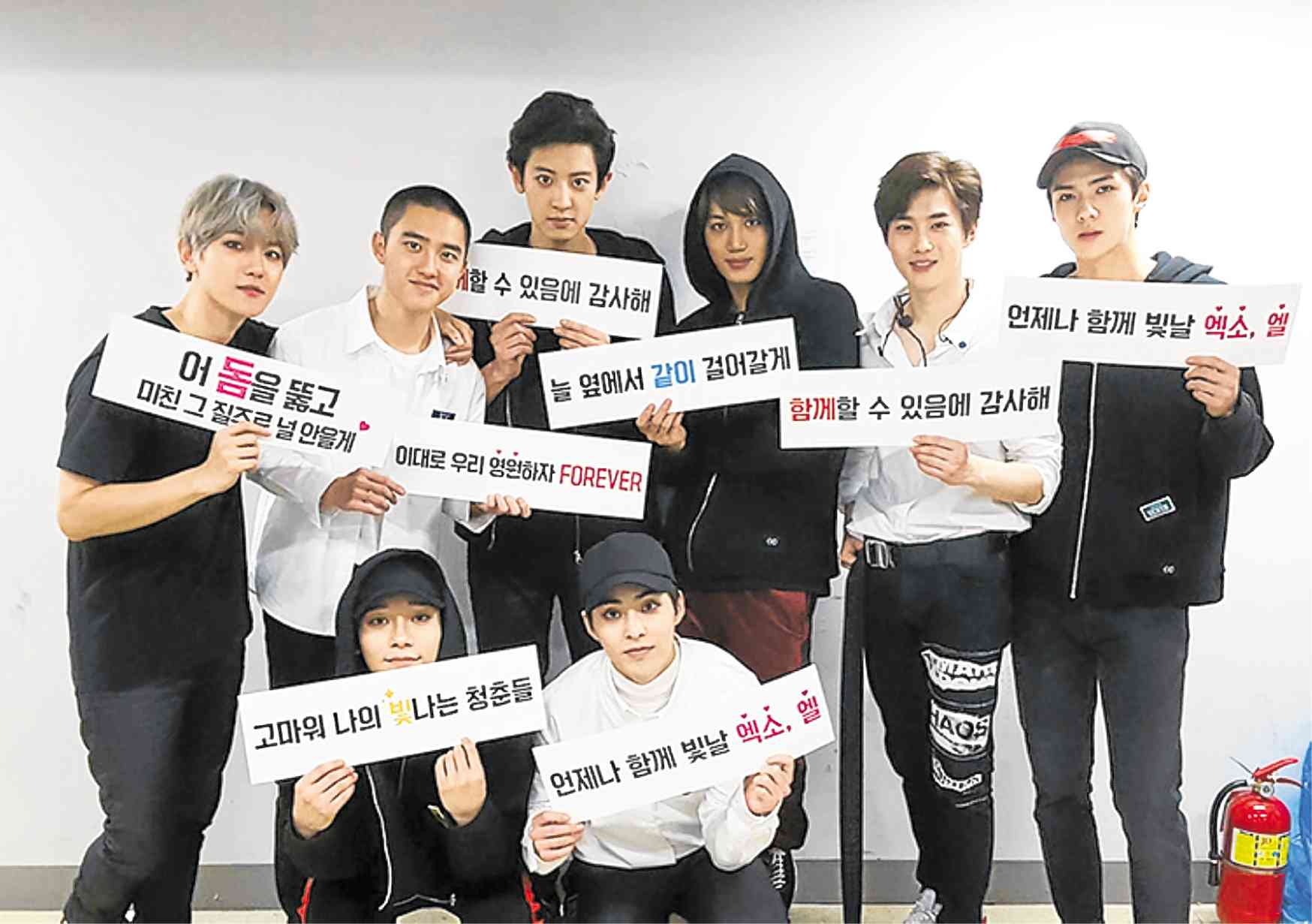 K-pop royalty EXO keep their promise to their fans as they return to Manila this month for their fourth concert tour, “ElyXiOn.” This will be EXO’s third solo concert in the country.

“ElyXiOn” is expected to be bigger and better than the group’s previous concert tours.

As EXO celebrate their sixth anniversary today, April 8, here are six reasons why you shouldnít miss their Manila stop.

EXO are worth it

Witnessing EXO’s live vocals, powerful dancing and handsome visuals is worth every penny. Their performances are always satisfying to watch.

Solos and duos to die for

For “ElyXiOn,” EXO members have prepared solo and duo stages again to highlight their individual talents. Xiumin and Baekhyun will face off on a powerful dance battle. While Kai will show his dancing prowess through his solo, “I See You.”

D.O. will sing “For Life” in English with Chanyeol on the piano. Suho will delight the audience with his sensual rendition of “Playboy.” Chanyeol will do an emotional rap solo of “Hand.” Chen will showcase a beautiful remix of the group’s song, “Heaven.” Sehun, the youngest, will showcase growth and maturity in his sexy solo, “Go.”

In 2017, EXO released “The War.” It became their best-selling album which topped their own records both in physical and digital album sales. Almost all the songs from “The War” and the repackaged “Power of Music” made it into “ElyXiOn’s” set list. Among the most anticipated songs by fans are “The Eve,” “Boomerang” and the viral hit “KokoBop.”

My favorite is definitely EXO’s EDM stage. This is when they perform breathtaking dance moves and go into a hardcore partying mode. The succession of “Coming Over,” “Drop That” and “Run This” will definitely make everyone jump and scream with the EXO members. The EDM segment will close with their hit song “Power.” Nothing beats the feeling of partying to this song with EXO.

EXO is known to be the best in giving fan service. A segment of their concert is always allotted to songs where they can interact more closely with their fans. Look forward to their playful interactions with each other and the fans all throughout.

The crowd makes our country one of the best venues for the concerts. Philippine EXO-Ls (name of the fandom) is a great crowd to party with. Their energetic cheering and even singing along with EXO during the concert will make it a memorable one for you. EXO always try to make their ìmentsî personalized and match whatever country they are performing in. “Ments” is a K-pop jargon that means a period where the artists rest and just talk to their audience for a few minutes.

In all their concert stops, they either talk about the food they ate, the sights they saw, or say phrases popular in that country at that time. During their past solo concerts here, they sang Yeng Constantino’s “Hawak Kamay.” They first performed the song in 2013. Last year, they talked extensively about Jollibee and said lechon was masarap. Don’t be left wondering what this year’s “ments” will be.

“ElyXiOn” in Manila will be held April 28 at the Mall of Asia Arena.