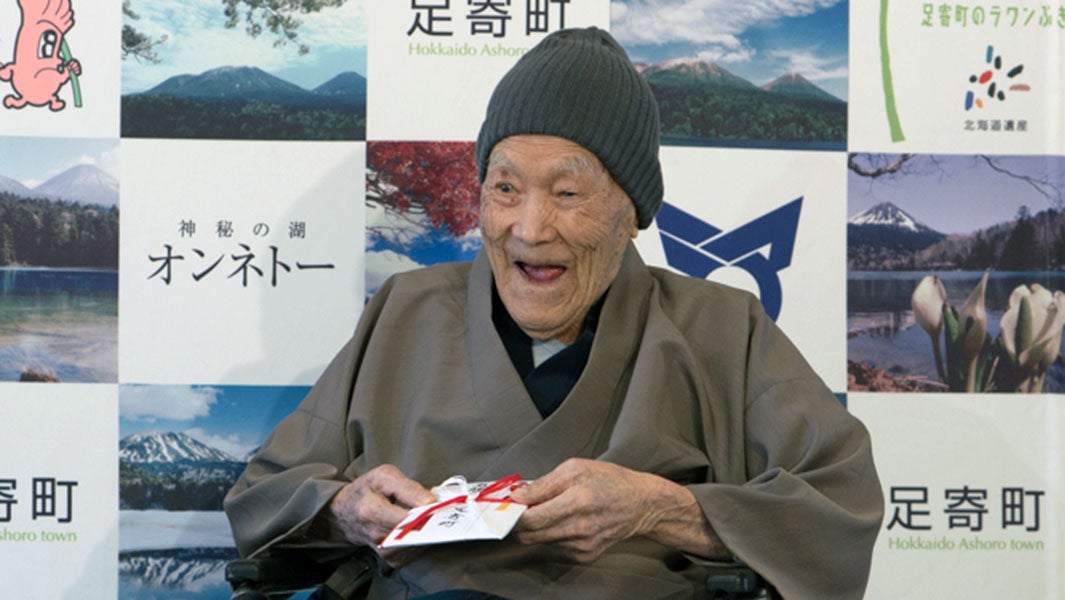 Masazo Nonaka, of Ashoro, Hokkaido, received the title of “oldest person living (male)” at age 112 years and 259 days as of April 10, according to a statement.

Vice President for Guinness World Records Japan Erika Ogawa personally handed the certificate to Nonaka. She also gave him a cake to celebrate.

The elderly man was born on July 25, 1905, just a few months before Einstein published his work on the special theory of relativity, and over a year before the Wright brothers took flight on a beach in Kitty Hawk, North Carolina.

Nonaka attributes his longevity to soaking in hot springs and eating sweets. He also enjoys watching sumo matches on television. His daughter, on the other hand, believes it’s because Nonaka lives a stress-free life.

“If he doesn’t want something, he’ll make sure everyone knows about it,” says his daughter.

Nonaka also enjoys spending time with family and his pet cats Haru and Kuro. He would even give them his dinner if he doesn’t like it.

Masazo Nonaka inherited his title from Francisco Nuñez Olivera of Spain, who died in January at the age of 113.

As for the oldest person living (female), the title is still up for grabs. It previously belonged to 117-year-old Violet Brown of Jamaica, who passed away in 2017.

Meanwhile, the title for oldest person ever still belongs to Jeanne Louise Calment, who hails from France. She was 122 years and 164 days old and lived from 1875 to 1997.  /ra