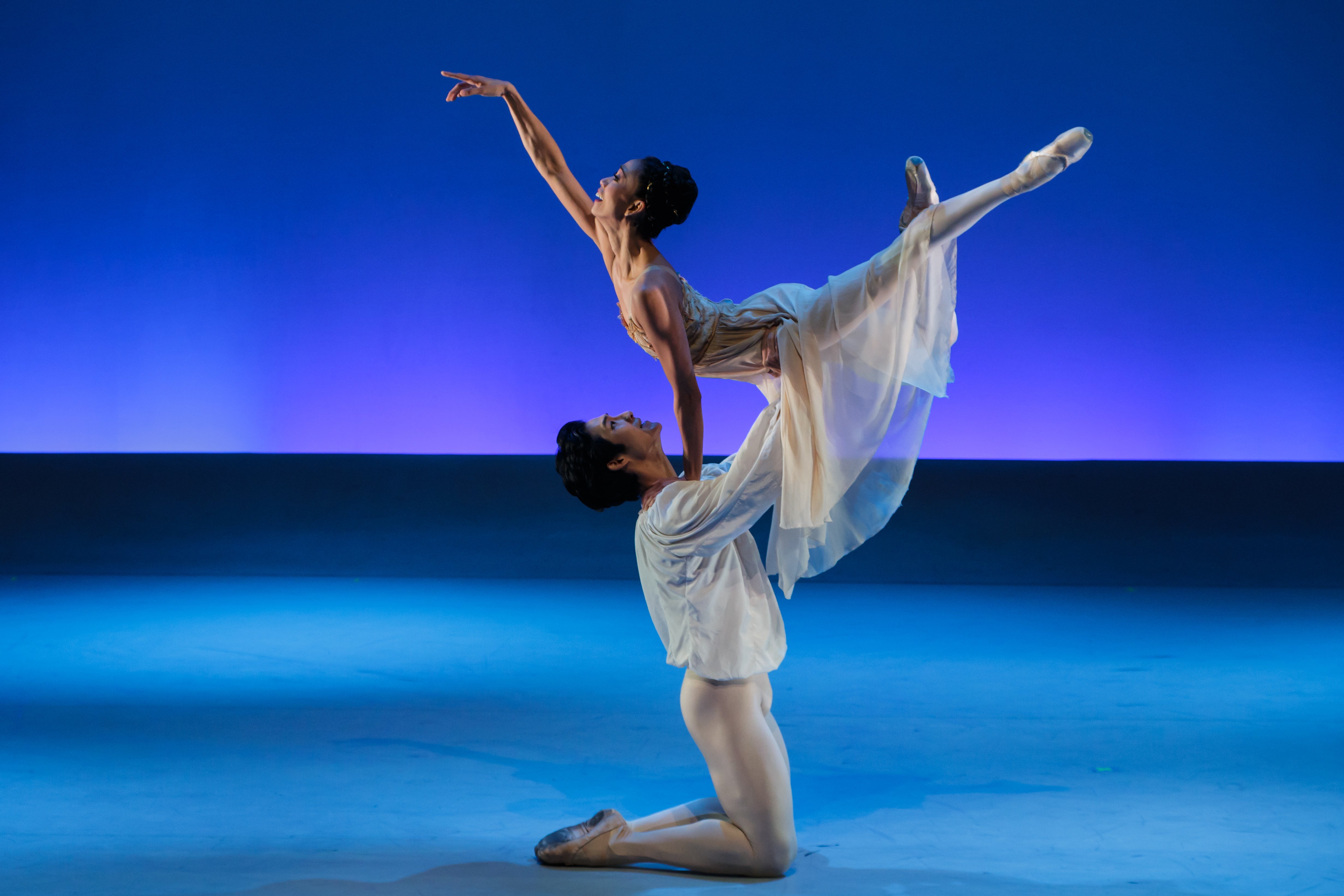 IT WAS a delightful case of fulfilled anticipation, right from the first sight of the blue and white Chinoiserie-inspired stage curtain created by scenographer Gino Gonzales.

When the curtains went up one by one on three different levels, leaving just the proscenium décor that extended the wing space and framed the performance area, the enchanting night began. It was a well-balanced, thoughtfully curated repertoire that not only managed to showcase every ballet star’s forte, but also paced the programme in an equilibrium of alternating tear-provoking adagios, breathtaking andantes and happy allegros.

Aptly opening the evening to John Philip Sousa’s marching band music was Balanchine’s “Stars and Stripes,” with American Ballet Theatre principal dancer Isabella Boylston and soloist Blaine Hoven. Their pas de deux rose to the demand for energy and spring that had once been the signature of Merrill Ashley, she with the elastic legs and perfect turns, who had essayed the piece in the early days of the New York City Ballet.

Perhaps present-day ballet training demands more from a dancer, judging from the visibly athletic yet graceful attack of both Boylston and Hoven, as compared to performances of the past.

Choreography by Sir Kenneth MacMillan always manages to squeeze out every ounce of emotion, matching the music note for note, sentiment for sentiment. Two contrasting pieces by MacMillan were indeed showcases for Stella Abrera’s expressive dancing, using every single muscle and sinew in her body.

In MacMillan’s “Romeo and Juliet” balcony pas de deux, Abrera, this time partnered by Joowon Ahn, transformed into a young girl whose desire and longing, coupled with hesitation at forbidden first love, is expressed at the start in tentative steps, gradually bursting into contractions and rapid rushes with abandon, into the arms of her equally lovesick Romeo, ending in his shoulder catch with her body stretched out, hanging on to his hand in a contorted clasp.
At almost every end of a section is a prelude to a first kiss which doesn’t happen until the very end, followed by the denouement of outstretched arms and untouching hands as Abrera’s Juliet is back in the balcony. MacMillan’s physically driven narrative is not lost on these two fine dancers.

Gillian Murphy and Jose Sebastian danced a section from a one-act ballet, “Bier Halle,” set to waltzes of Johann Strauss. The comedic ballet, choreographed by Murphy’s husband, Ethan Stiefel, was a lighthearted number inspired by a Bavarian beer hall.

“On the Water,” also danced by Murphy with Blaine Hoven, exhibited both dancers’ fluidity of technique, and as the title of the ballet suggested, required a flawless execution of James Whiteside’s choreography, with fast twirls emulating ripples of water, and grand jetés that landed lightly and segued into graceful falls. A lyrically cohesive whole: dance, choreography and Franz Schubert’s music that ended much too soon.

Following the typical format of a grand pas de deux, the suite from the four-act ballet, “Flames of Paris,” based on the songs of the French Revolution, was a bravura showpiece—a dance of victory after the overthrow of the aristocracy in the time of Louis XVI and Marie Antoinette.

Every grand pas is show-off time, with the ballerina and danseur alternately exhibiting their prowess in physically challenging combinations before finally coming together again, ending the variation with bravura and aplomb.

Catherine Hurlin and Arron Scott, as the revolutionary lovers Jeanne and Philippe, were wonderfully matched in their strength as dancers. Scott’s balletic jumps and Hurlin’s fouettés in the finale left the audience breathless.

Despite the space constraints of the stage, both dancers, like all the other dancers that night, owned every inch of the stage.

With the familiar strains of the “Don Quixote” variations came the only set change. Silhouetted against red stage lights were three giant fans. And when the lights came up, the backdrop revealed blue and white fans decorated with windmills, amidst flourishes of acanthus leaves.

What followed was perhaps the proudest moment of the concert—the participation of the young scholars of Steps Dance Studio, similarly clad as the ballet stars in turquoise pantaloons and tops for the boys, and ecru and gold lace tutus for the girls.

As the corps, they were sharp, hitting musical accents in unison, moving along the same tangents and wonderfully breathing as a whole. The “Flower Girl Duet,” performed by Maisie Marie Briones and Paloma Laforteza, showed great technique potential in their long limbs and extensions.
In the final variation, the young dancers matched the energy of the American dancers, perhaps inspired by such proximity and the thought of literally dancing with the stars. Most of all, it must have been the presence of Stella Abrera, the first Filipina to be named principal dancer in one of the world’s most famous dance companies.

At curtain call, when organizing chairperson Sofia Zobel Elizalde came to take her bow, Abrera instinctively lay her bouquet in front of Elizalde, as the other ballerinas followed. It was clear that the entire endeavor for a good cause—Centex, an education program for underprivileged children—was a mutual exchange of goodwill, camaraderie and, most of all, downright great dancing.