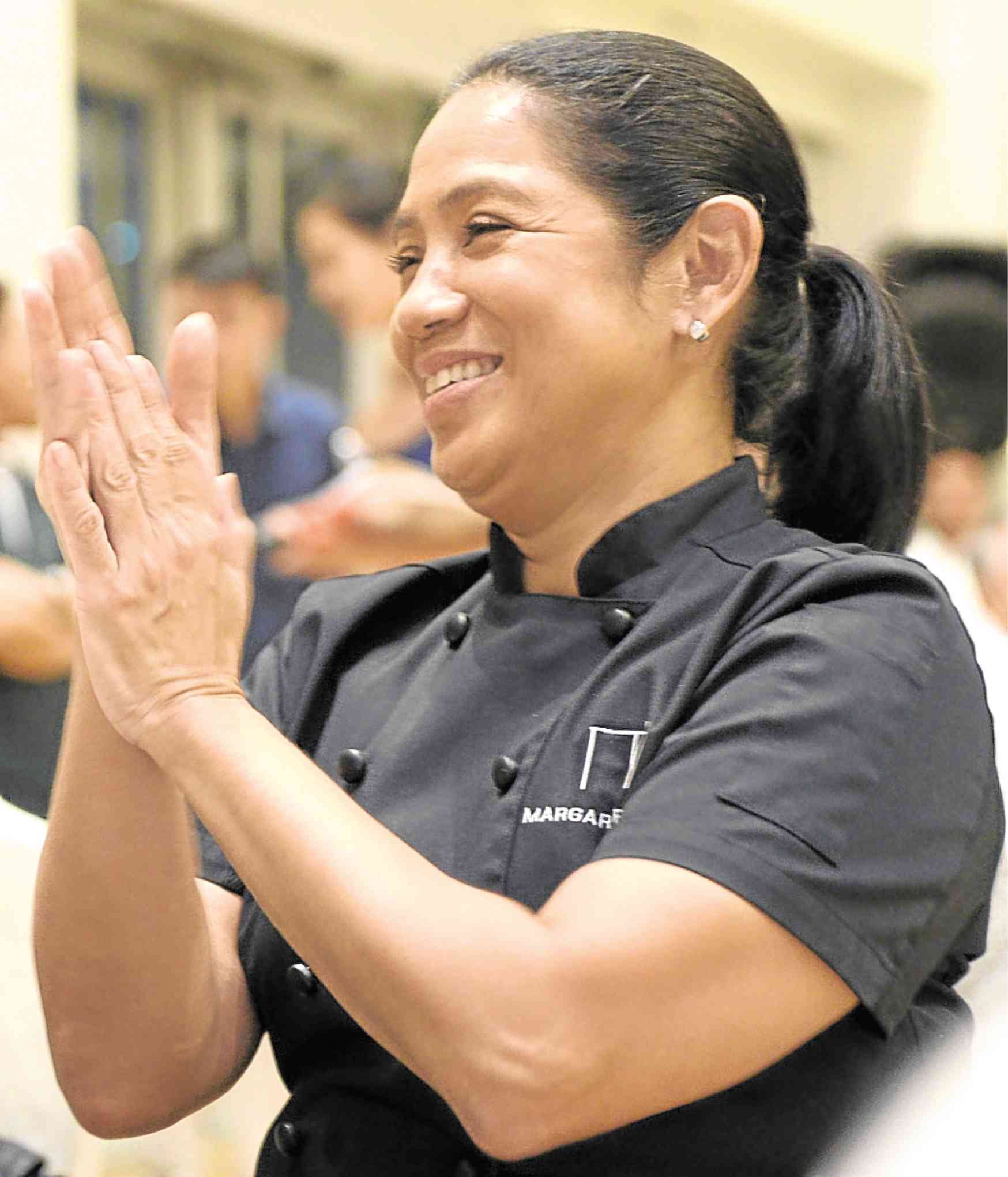 Margarita Fores returns to her roots.

The second edition of the Kulinarya Dinner Series presented Margarita Fores, one of the featured chefs in the book “Kulinarya: A Guidebook to Philippine Cuisine” (Asia Society, 2008).

The host, Asia Society Philippines, decided that its dinners should focus on regional cuisine.

Last March 15 at The Loft, Manansala at Rockwell in Makati, the food virtually took diners to Western Visayas for Ilonggo cooking.

Fores’ grandfather, J. Amado Araneta, was born in Bago, Negros Occidental. Her cousins, the Roxases, are from Capiz. Other provinces in the region are Aklan, Antique, Iloilo and Guimaras.

Served at cocktails in the open balcony were tuna kinilaw in shooter glasses, with peanuts and bilimbi (iba, kamias) on adlai crackers, piaya, or Ilonggo flat bread with chicken liver pâté (instead of muscovado), lumpiang ubod or spring roll of heart of palm and Capiz scallops (lampirong) with sautéed fish roe (bihod guisado).

In the dining area, Asia Society executive director Suyin Liu Lee gave a brief background on the dinner series, introduced the chefs and the “Kulinarya” editor.

My talk on Filipino cuisine covered prehistoric times, and how the formation of the archipelago led to marine biodiversity and regional preferences. But interaction through travel allowed regional food to be known beyond its borders.

Among the Ilonggo food that has been recognized around the country are pancit molo, batchoy, lumpiang ubod, chicken inasal, laswa, diwal, and sweets from sugar plantations.

Fores presented her menu, written in Ilonggo and English, the ingredients specified for the guests’ appreciation.

Sabaw or soup was binakol nga manok—native chicken boiled with the juice and meat of young coconut, oyster mushroom, chili leaves and served in coconut containers.

The addition of poached foie gras, Fores said, was her way of upgrading the dish to present times.

From her grandfather’s city of Bago was river eel braised in coconut milk, ginger, and annato (adobo nga sili sa gata), just one adobo variation that, according to Mishan, has “as many manifestations… as there are Filipinos.”

Fores’ Italian touches reflected a love for her second home country. For the eel, she added pinoli or pine nuts. She also used Balsamic vinegar (aceto balsamico) for another adobo of sugarcane field bird (pitaw). She served it with pickled palm heart (achara) and fried grains of adlai (Coix lachrima, Job’s Tears).

Baboy is pork hock or butt, kadyos is pigeon peas, while the langka or jackfruit used is unripe.

The salad dish had fern (pako-pako), heart of palm (ubod) with a sugarcane vinaigrette.

And even with the adlai present in many of her dishes, Fores served Milagrosa rice from Negros perfumed with the herb pandan mabango.

Wrapping up the dinner was a trio of desserts. Dulce de leche is toffee presented in cans in the region instead of individually wrapped pastillas or candy.

The cassava cake (bibingka balanghoy) was enriched with Parmigiano-Reggiano or parmesan.

Pastillas was made brown by chocolate ganache (tsokolate kag pastillas).

There are four more chefs to be featured in succeeding “Kulinarya” dinners—including Jessie Sincio who will present Bulacan riverine cuisine in May.