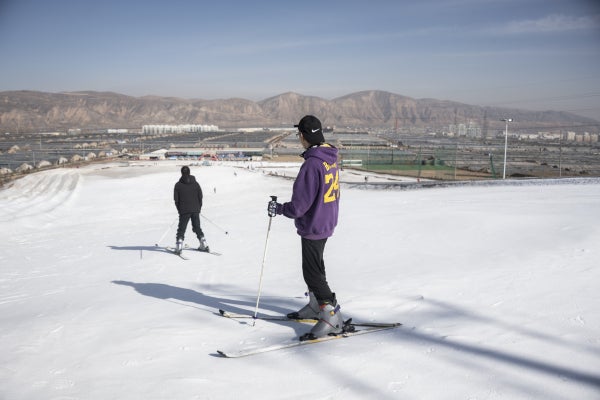 n this picture taken on February 25, 2018 a boy on skis looks down at a ski slope on the outskirts of Xining, capital of Qinghai province. The world's most populous country wants to put 10 percent of its total population on skis ahead of the 2022 Beijing Winter Olympics -- a figure so large it would double the current global tally of skiers. © Johannes EISELE / AFP

The man-made snow had slicked to sheer ice, and just minutes into her first time on a ski slope in northwest China, Cheng Wenyuan had already fallen twice and watched her son face-plant four times.

“We tried it, but we’re done now. It’s really painful, no fun at all,” said the 43-year-old accountant as she wrangled her 12-year-old back to the lodge of Aosilu, or “Oslo”, ski club, nestled among fields of hothouses growing tomatoes and strawberries on the outskirts of Xining, capital of Qinghai province.

The world’s most populous country wants to put 10 percent of its total population on skis ahead of the 2022 Beijing Winter Olympics — a figure so large it would double the current global tally of skiers.

To reach its goal, Beijing will have to boost enthusiasm for the sport among families like Cheng’s, and in previously ignored corners of the country such as barren Qinghai, with frigid winters and an average elevation of over 3,000 meters (9,800 feet).

As of last year, Qinghai had just seven ski slopes — none steep enough to even merit chairlifts — compared to 124 in Heilongjiang, the province with the most, according to statistics compiled by Chinese ski industry professionals.

The largest of them is tiny Aosilu: a single beginner’s slope just 400 metres (yards) long and 300 metres wide.

Three lie in Datong county just outside the provincial capital, where — in an inconvenient blow to pleasure-seeking daytrippers — access is forbidden to foreigners.

Local police told AFP reporters that they could not go to the area.

An officer said there was “no reason” for the unwritten, unpublicised ban but explained “if we see foreigners we will send them away.” The area is known to be the site of a missile garrison.

Staring out over the slope as Snoop Dogg and Adele played over the loudspeakers, Aosilu manager Cai Bingjian explained that skiing’s growing popularity had become a double-edged sword for ski entrepreneurs.

“Qinghai is only so big, with so many people. If others build more slopes, then the clients will be spread across them, profits will tank, and there will be no way for us to continue,” he said.

Qinghai is sparsely populated — the province is China’s fourth largest by area but third smallest in terms of inhabitants, with nearly half of its 5.6 million people living in Xining.

When it first opened, only a handful of visitors could ski, Cai said, but now there are around 500 regulars able to comfortably make their way downhill.

On peak days, some 5,000 people pay 180 yuan ($28) to ride the magic-carpet conveyor lift to the top of the small patch of white, prepared over the course of an entire month pre-season and replenished with blasts of fresh artificial snow for nine hours every night.

Such technology allows ski businesses to overcome Xining’s nearly total lack of snow — a challenge that also awaits the 2022 Olympics, set to be held in a rural region north of Beijing where precipitation is low.

“The slopes are a good driver of the local economy, especially in the winter, when construction and other jobs have stopped because it’s too cold,” explained Cai, who has 60 seasonal employees.

However, the province will not be able to depend on skiing to spur local development, said Cai.

Slopes are unlikely to open far from Xining, and many areas are simply too high to ski without altitude sickness. Also, most locals cannot spare the money to take up such an expensive pursuit.

Skiers from elsewhere in China sometimes stop by while on business trips, but the province’s slopes are still too small to attract out-of-towners, Cai said, although there have been efforts to develop facilities for ski mountaineering on the highest peaks.

China sent 82 athletes to the Pyeongchang Games in South Korea this year — up from the 66 who traveled to Sochi four years ago — but won just nine medals.

Failure on home turf in 2022 is unthinkable.

“Every province must do its best to accommodate (President) Xi Jinping’s goal” of Olympic success, said Aosilu’s Cai.

In February, the Chinese ministry of education declared it mandatory for all primary and secondary schools throughout the country to incorporate “Olympics-themed education” into the curriculum.

All schools in the north must now set up snow sport courses, while those in the south are encouraged to coordinate with snow sport arenas, the official decree said.

He Liping, a 29-year-old banker on her first ski trip, said she felt the industry in Qinghai would ultimately boom.

“In the winter, there’s nowhere to go for fun. Other than skiing, there’s nothing going on.” MKH

7 Things you need to do when in Hokkaido, Japan