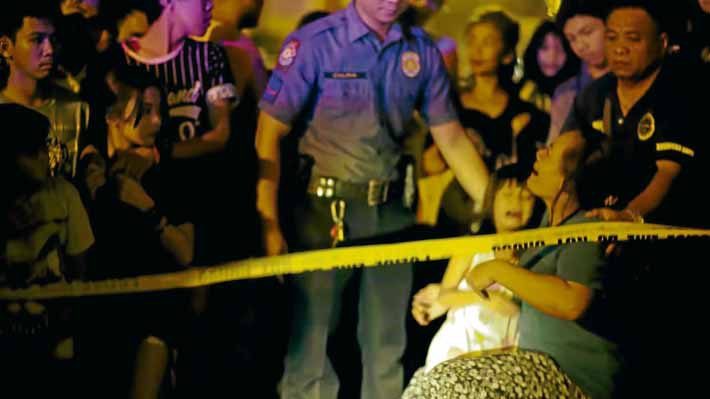 There are three compelling reasons to watch the 13-episode TV series “Amo.”

Mendoza’s biggest achievement to date is winning as best director in the 2009 Cannes Film Festival for “Kinatay,” a story of crime and violence in the mode of cinema verité, or realistic, documentary-style filmmaking.

Since the subject of “Amo” is the drug war, Mendoza’s flair for cinema verité is to be expected. But his recent role as director of Mr. Duterte’s two previous State of the Nation Addresses — in which he tried to project the President’s populist image with mixed results — puts him at a disadvantage: He risks being branded as a propagandist.

The plot of “Amo” allows Mendoza to shoot scenes he is much at home with — the slums, where drugs abound, particularly “shabu” (crystal meth).

High school student Joseph Molina (played by Vince Rillon) is a drug runner while his uncle, Senior Police Officer-4 Camilo Molina (Allen Dizon) — who bails him out of jail — dips his hand in corruption. Joseph’s brother-in-law, Bino Campos (Felix Roco), is a midlevel pusher who gives Joseph a chance to earn more money selling ecstasy and other party drugs.

Mendoza’s camera follows Joseph’s and Bino’s drug deals, including bad ones (estafa, in local parlance, or double-cross), eventually leading to a drug bust that gets Bino killed and forces Joseph to hide in the province.

Realism pervades these episodes, and Mendoza should be credited for rendering certain scenes, such as warrantless arrests and forcing drug suspects to sign waivers, which has tainted the Philippine National Police’s antidrug campaign, notoriously dubbed “Tokhang.”

But things get muddled starting in Episode 9, titled “The Asset,” in which a new character, Police Officer 3 Rodrigo Macaraeg (Derek Ramsay), is assigned, along with Joseph’s uncle cop Camilo, to arrest a high-value target, Japanese national Takeo Sugimoto, who is suspected of drug dealing.

As it turns out, this second half of the plot is a fictitious adaptation of the real-life kidnapping of Korean businessman Jee Ick-joo, who was abducted and killed by his police captors after the lawmen received only P5 million of the P8-million ransom they demanded.

The script is twisted by showing shabu hidden in Takeo’s safety deposit box — something that actually never happened in the Jee Ick-joo case.

Nonetheless, Mendoza’s unflinching depiction of bad cops in the persons of Rodrigo, Camilo and their superiors is commendable.

Ramsay’s portrayal of Rodrigo, for instance, is gritty and a refreshing departure from the typecast leading-man roles of the popular actor. However, Rodrigo’s descent from his otherwise upright character in Episode 8 (“The Operation”) into a bad egg is rather flimsy. His decision to demand the remaining P3 million ransom from Takeo’s wife is motivated only by a desire to buy an expensive vehicle.

But the most unfortunate, head-scratching flaw in “Amo” lies in two crucial instances. In Episode 10, “The Kidnap,” Takeo’s newly hired maid, Christina, a sex worker and police asset, is shot dead by Rodrigo after Takeo himself is killed by the rogue cop. And then, in the penultimate Episode 13, “The Escape,” Christina emerges alive, unscathed, and becomes the key witness to the kidnapping.

Such blunders may escape the ordinary viewer, but this is not an ordinary teleserye. Rather, this is the highly regarded Brillante Mendoza showing to the world via Netflix his interpretation of an unpopular drug war, which he has publicly defended in media interviews.

Yet, if Christina actually survived, whatever gunshot wound she sustained is not shown when she is interviewed on radio.

But, all things considered, the biggest question that begs for an answer is, who is the “amo” or the boss in the story? It can’t be the police top brass, since their ranks are supposed to be the protectors of drug lords.

“Amo” is available via live streaming on netflix.com.