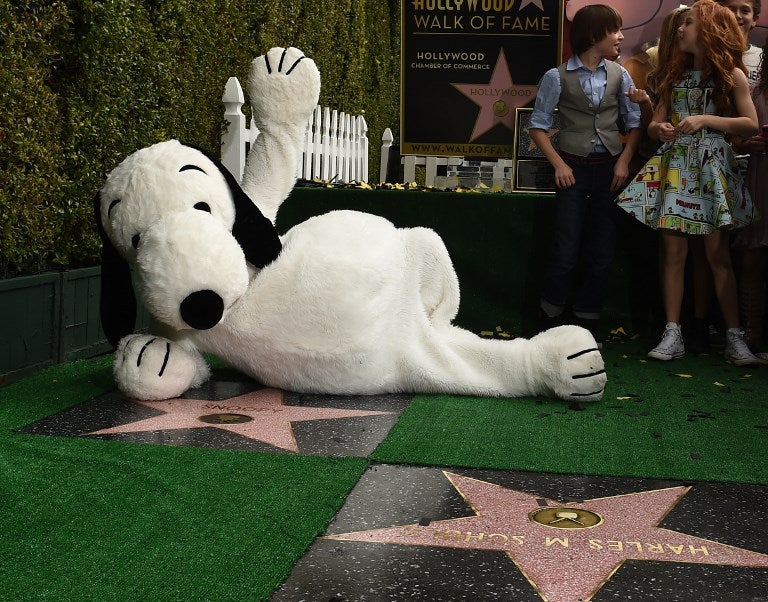 Snoopy pose on his star, which is next to the star of his creator Charles M. Schulz (R) during the star unveiling ceremony on the Hollywood Walk of Fame, November 2, 2015 in Hollwyood, California. Snoopy co-stars with Charlie Brown and Lucy in "The Peanuts Movie" which opens in the US on November 6, 2015. AFP PHOTO / ROBYN BECK / AFP PHOTO / ROBYN BECK

PARIS, France — Good grief, Charlie Brown has got into graffiti…

The first of a series of huge street art projects featuring Snoopy and the Peanuts gang was unveiled in Paris on Saturday.

The wraps will come off other murals in New York Monday with Tokyo, Seoul, Berlin, Mexico City and San Francisco to follow.

But what would his creator Charles M. Schulz think?

He would be thrilled, insist the keepers of the Peanuts flame who point out that the great cartoonist was a friend and supporter of street art pioneer Christo, famous for wrapping the Reichstag in Berlin and the Pont Neuf in Paris.

The Bulgarian-born superstar even wrapped Snoopy’s kennel and presented it to the Schulz Museum in Santa Rosa, California.

“I think Charles Schulz would love this project,” Melissa Menta of Peanuts Worldwide told AFP. “He loved artists and in one strip he has Snoopy daydreaming about Christo. At the end of it he returns to find that he has wrapped his doghouse, which Christo then did in real life.”

She said Peanuts Worldwide had exceptionally allowed the seven street artists chosen for the Peanuts Global Artist Collective to redraw the beloved characters from the famously philosophical strip.

They include the sometimes controversial American artist Rob Pruitt, who has Snoopy walking a tightrope with one of his trademark panda figures.

“I think I taught myself how to draw by copying Peanuts characters and strips over and over, especially the details — the grass, the snow, the wobbly lines,” Pruitt said.

Menta said Pruitt was an obvious choice because he had “Peanutized himself years ago. He did a series of tombstones with the Charlie Brown stripe on them way back and he was clearly a Peanuts fan.”

She said far from being afraid of what artists would come up with, “it was the best form of flattery to have them riffing on Peanuts in their form of expression.”

The French graffiti artist Andre Saraiva — aka Mr A — has Snoopy hanging out with his stick figures while the world’s most Zen dog skateboards with Woodstock in the first piece to be unveiled Saturday on the facade of the Citizen Hotel in Paris by US artist Nina Chanel Abney.

The other artists involved include the American Kenny Scharf, whose work will be shown in New York on April 16; Japan’s Tomokazu Matsuyama; the duo FriendsWithYou (Samuel Borkson and Arturo Sandoval III); and the collective AVAF. /cbb