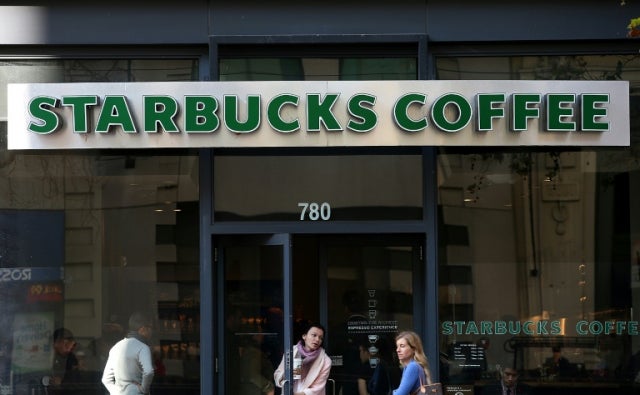 Starbucks is apologizing for an incident in a Philadelphia store where two black men waiting for a friend without ordering were arrested by police. Image: AFP/Justin Sullivan

The CEO of Starbucks has apologized for an incident at one of the mammoth chain’s Philadelphia cafes where two black men were arrested while waiting for a friend.

A video of the incident, posted Thursday on Twitter, was viewed millions of times and drew widespread condemnation on social media.

CEO Kevin Johnson, in a statement, expressed the company’s “deepest apologies” to the men for what he said was the “reprehensible outcome” of the incident.

Johnson said the company would investigate and “make any necessary changes” to avoid a recurrence. “Starbucks stands firmly against discrimination or racial profiling,” he said.

The video posted by a Starbucks client shows several uniformed police officers questioning and then handcuffing the two men, who offer no resistance.

The woman who posted the video, Melissa DePino, tweeted: “The police were called because these men hadn’t ordered anything. They were waiting for a friend to show up, who did as they were taken out in handcuffs … All the other white (people) are wondering why it’s never happened to us when we do the same thing.”

She said it was a Starbucks employee who called police.

The two men’s pro-bono lawyer Lauren Wimmer, interviewed by a CBS affiliate in Philadelphia, said they were waiting for a third man to arrive for a business meeting.

Philadelphia police commissioner Richard Ross, who is black, said police had received a 911 call from a Starbucks worker who said the men were trespassing, after sitting down and refusing to buy anything. Ross said his men had “politely” asked the two to leave before finally arresting them.

The men were released after Starbucks declined to prosecute them.

Johnson, in his statement, said the store manager never intended for the men to be arrested, adding that he hoped to meet them personally “to offer a face-to-face apology.”

The video drew widespread attention. Drummer Questlove of the group “Roots” tweeted a question: “Waiting in a Starbucks while black is a crime?” CC

This is why your Starbucks coffee doesn’t come in small, medium, and large