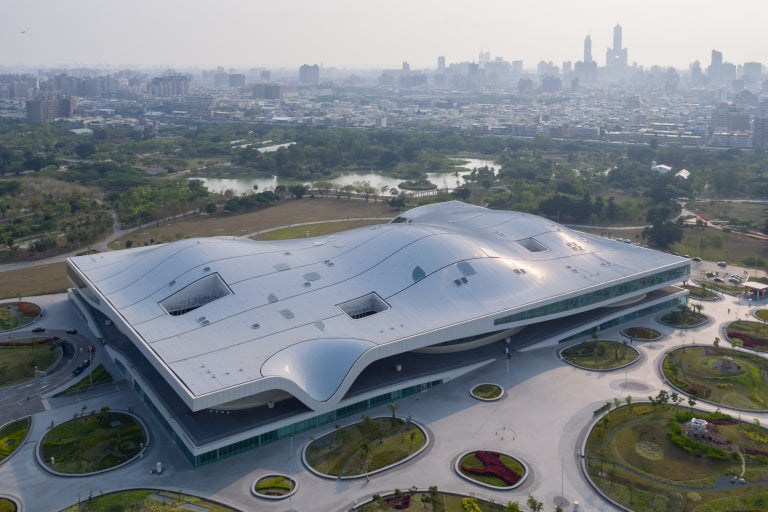 Mecanoo is behind a new Taiwanese performing arts center opening in October that is said to be the world’s largest under one roof.

The National Kaohsiung Center for the Arts, also known as Weiwuying, will cover 35 acres (141,000 square meters) and incorporate five separate art performance spaces in one single building by the Dutch architecture practice.

Incorporated in the Center will be a 2,260-seat opera house, a 2,000-seat concert hall, a flexible playhouse suitable for theater, dance and Chinese opera that can seat upwards of 1,000, a 470-seat recital hall and an outdoor performance space open to audiences of up to 20,000.

That outdoor space will link the building to an adjacent subtropical park in Kaohsiung, a city of 3 million.

According to Mecanoo, the vast, undulating structure housing the Center was inspired by the shape of the local Banyan trees, with a curved steel roof sheltering a plaza where residents can wander day and night. The open-air theater is nestled into the roof where it curves to the ground.

Taiwan has announced that the enormous venue will open to the public in October, with the Berlin Philharmonic Orchestra, under Gustavo Dudamel, among the first artists to perform there.

The venue will be the third of three flagship institutions under the umbrella of Taiwan’s National Performing Arts Center, which also includes Taipei’s National Theater and Concert Hall and the National Taichung Theater.

“The creative industries are extraordinarily lively in Taiwan,” said the new venue’s artistic director, Chien Wen-pin, current Kapellmeister of Deutsche Oper am Rhein and former music director of the Taiwan Philharmonic. “Once our doors are officially open, the Center will become an exciting springboard from which talent can soar.” JB

Former U2 stage to be centerpiece of Utah aquarium expansion