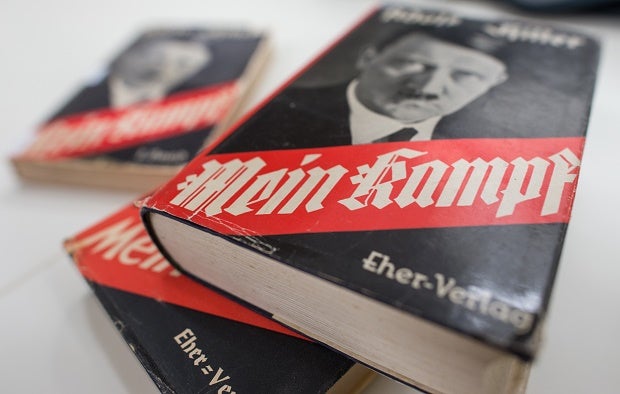 In this Dec. 11, 2015, file photo, different editions of Adolf Hitler's "Mein Kampf" are on display at the Institute for Contemporary History in Munich. For 70 years since the Nazi defeat in World War II, copyright law has been used to prohibit the publication of Mein Kampf, the notorious anti-Semitic tome in which Hitler set out his ideology, in Germany. That will change in January 2016, when a new edition with critical commentary, the product of several years' work by a publicly funded institute, hits the shelves. While historians say it could help fill a gap in Germans' knowledge of the era, Jewish groups are wary. dpa via AP FILE PHOTOS

A probe has been launched after a theater in Germany promised free entry to spectators who wear a swastika to a play named after Adolf Hitler’s Mein Kampf, prosecutors said on Tuesday.

A spokesman from the prosecutor’s office in the southern city of Constance said it would investigate after a number of complaints were made, according to the German news agency DPA.

Under German law, publicly displaying the Nazi symbol is illegal. Theatergoers in the picturesque lakeside city have been offered free tickets to Friday’s premiere if they wear a swastika, given to them on entry, during the performance. Those who pay for a ticket will be asked to wear a Star of David “as a sign of solidarity with the victims of National Socialist (Nazi) barbarism,” the theatre’s operators wrote on their website.

The premiere of Mein Kampf, a reference to the book written by Hitler when he was in prison before taking power, is scheduled to take place on Friday, April 20, the anniversary of his birth in 1889 in Austria.

The theater said it aims to show how easily people are corruptible but the approach has sparked controversy.

The German-Israeli Society in the Lake Constance region and the Judeo-Christian Society called for the boycott. The play by George Tabori, who died in 2007, is a caricature of Hitler’s youth, according to the theater.

Investigators, however, need to examine the extent to which this can be a freedom of artistic creation.

The controversy comes as German authorities are worried about the rise of anti-Semitism, especially in schools.   /kga