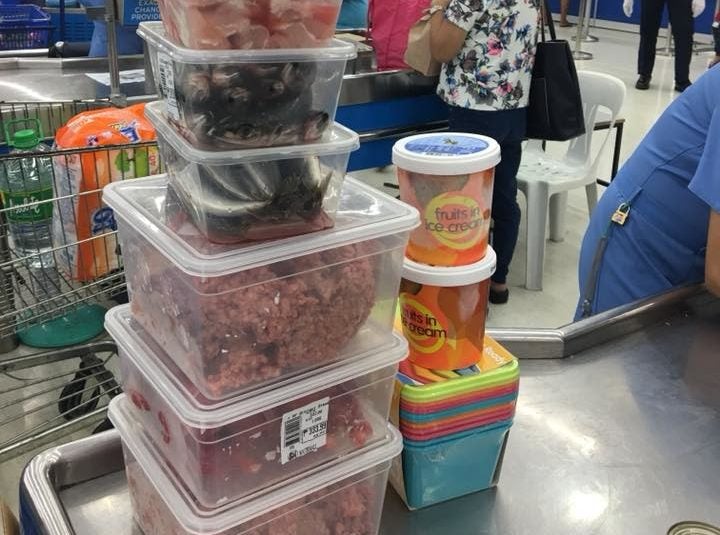 “You are eating what you are throwing.”

This was the belief of Lenn Tejada-Katindig, a waste reduction advocate whose simple initiative to reduce plastic usage when shopping became inspiration to many as it went viral on social media.

Unlike many typical shoppers, Tejada-Katindig tries to minimize her plastic consumption through the unorthodox bringing of reusable containers at the grocery.

Instead of using disposable bags, she insists on putting fish, meat, and poultry products in her washable containers that she brings with her at the supermarket.

Bringing her own containers, she believes, is a big initial step towards achieving a “zero waste” lifestyle.

The ecological effort of Tejada-Katindig was welcomed with both cheers and admiration, with some even aiming to emulate her move.

She recently shared her shopping tip in a Facebook group called “Buhay Zero Waste.” It went viral since then.

Considering that “small matters and small adds up,” she advised people to try by starting slow, asserting that it was never a tedious job.

Aside from bringing containers at the grocery, she also shared that her family brings their own utensils and cups whenever they go out.

“Sometimes pag nasa meeting ang husband ko, I buy what I can carry then go back another day sa supermarket. That way I was able to stick sa advocacy ko without forcing myself,” she also said.

She also believed that the worsening plastic waste pollution could endanger wildlife, nature, and the next generation.

“We have to think of the future of our children. We love animals. Marine animals suffer the most. My daughter loves the beach and I don’t want her swimming in a beach full of trash. She wanted to see marine life but instead what she sees are plastics floating around,” she said.

Tejada-Katindig’s post left many other netizens in awe. As of this writing, Katindig’s post in the group already gained more than 2,000 reactions and a thousand of shares.

“Wow! How do they weigh it without the plastic though? This is genius,” Antipuesto commented.

In another comment, Kage Gozun said she was glad that more people are bringing their reusables to buy meat and fish.

The Philippines is said to be one of the world’s worst plastic polluters of oceans. According to environment group Greenpeace, an equivalent of one truckload of plastic end up at sea every minute.

During this year’s Holy Week observance, environmental watchdog EcoWaste Coalition lamented the tons of waste left in pilgrimage sites and picnic areas in some provinces.

For Tejada-Katindig, conserving the environment starts with one’s self and changing the way people consume plastic and disposable materials “is a small attempt to change.” /kga