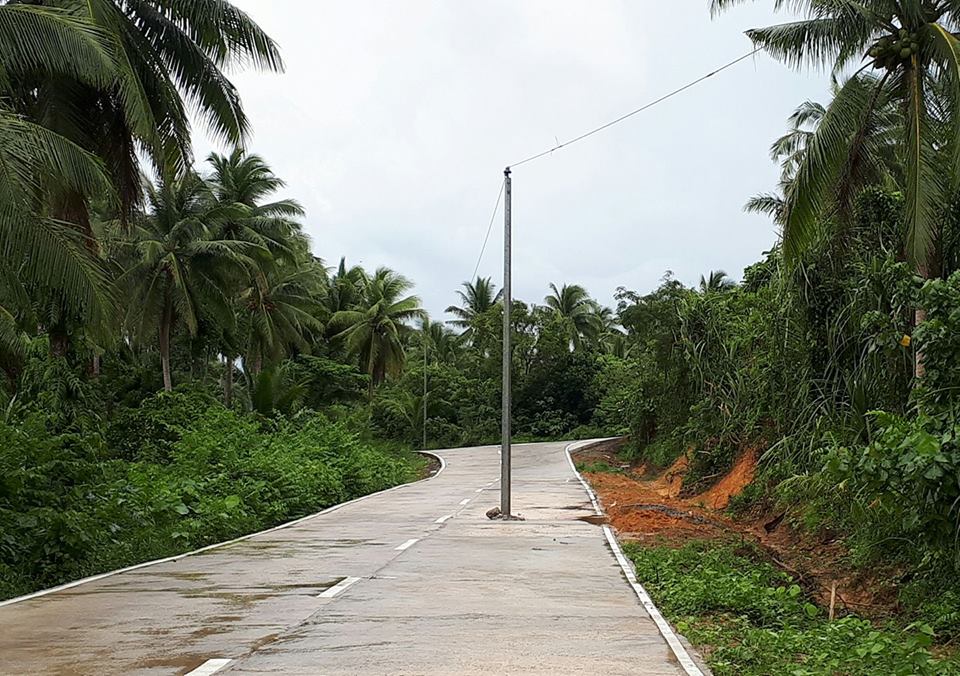 A post which appears smack-dab in the middle of a road in Siruma, Camarines Sur got netizens concerned as a photo of it first circulated in Facebook last April 11, courtesy of Jojo Villareal, a tour coordinator and outdoor adventure organizer at the Caramoan Camsurkadlagan Tours.

Villareal shared his post once again the next day, April 12, calling out the government for the negligent and unsafe design of the structure. “Now the serious side. This post is a symbol of great neglect of public safety and exploitation of the government who built this structure [with] the apathy [for] the local community…”

“Their line of thinking is, [tutal] wala naman gaano sasakyan dumadaan dito. [Tutal] malayo naman ang lugar (anyway, not many vehicles pass by here; anyway, this place is too distant),” he lamented. “But, how about people who are new to the place and driving… they don’t know the place, they might not be able to see the post and can cause accidents.”

Villareal thus called for the Department of Public Works and Highways to do something about the misplaced post, writing, “For public safety, the Dpwh or agency in charge should just place a warning marker or visible placards for the meantime, if it can’t be relocated. But, they do nothing. Hope with this picture — they will do something.”

Villareal’s post eventually went viral; he later wrote in April 13 that his picture unexpectedly gained 5,000 shares. “Because of the media and netizens clamor for public safety, it caught the attention of the Nanunundan in Bicol terms or Authorities responsible for this project. Now, they are doing something…,” wrote Villareal.

“The fast action at least prevented an accident,” Villareal added, as he marveled at the power of social media when it comes to making a difference in society. “We can use the social media with our photos/videos as instrument to help and make a difference about the issues of the society, environment and other problems that affect the community.”

In his latest update about the post two days ago, April 16, Villareal shared a before and after photo of the post after being relocated to the side of the road. The post had been moved by April 15, just four days after Villareal took to Facebook to air out his grievances.

(But thanks to everyone for their concern and to those who contributed for the quick action in fixing the wrong way of installing the post. Public safety first.)

At some point, citizens may find themselves asking what they can personally do to contribute to their communities. One is not asked to sacrifice so much; simple well-meaning reminders and spreading awareness in social media, for example, go a long way, especially when they reach the right authorities. In Villareal’s case, his ostensibly little act on Facebook means one less road accident, one less fatality or death in a little town. JB