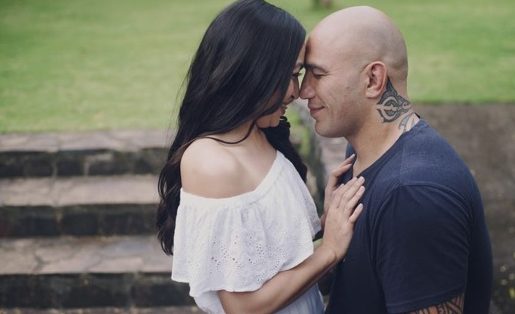 This is looking to be Brandon Vera’s biggest year yet. Today, April 20, the Fil-Am mixed martial artist is set to marry longtime girlfriend Jessica Craven in Guam—the same place where they got engaged exactly one year ago. The couple’s friends and family from all over the world are expected to fly to the Micronesian island, a US territory, for this momentous event.

Brandon and Jessica have long been friends before their romantic relationship started. Jessica was working in Brandon’s Alliance Gym in San Diego, California, when the two met. It was during Brandon’s toughest and most trying time when the two fell in love with each other, and the rest is history.

This year, Brandon’s acting career is poised to jump to the next level as his film, “Buy Bust,” co-starring Anne Curtis, will be released internationally. This Erick Matti action film is expected to be a blockbuster when it hits the big screen.

Brandon will also be defending his ONE Championship Heavyweight gold this year. Having been sidelined for a year—as he has to juggle moving to Manila, shooting an action film and preparing for their wedding—the heavyweight knockout artist will soon be seen again under the ONE Championship lights.

Another 2018 milestone for Brandon is the opening of Alliance Training Center, Philippines. Touted to become the premiere training facility in the country, Alliance will feature a state-of-the-art, eco-friendly, cutting-edge architecture. This game-changing training facility will feature modern gym equipment for resistance, strength and conditioning training; a complete mixed martial arts area; and a glass aquarium pool on the top floor, among others.

Martial arts classes will be handled by no less than professional fighters themselves, some of them flying in from San Diego, according to plans.

Alliance Training Center will only be the third place in the Philippines to boast a cryogenic machine. This multimillion-peso machine speeds up recovery time for hard-training athletes.

The Pop Up boutique lifestyle mall

Alliance Training Center will be situated in The Pop Up, a boutique lifestyle mall in Katipunan, near Ateneo de Manila University in Quezon City. Designed by a powerhouse team from New York, the one-hectare development will soon be home to favorite establishments and brands.

It will indeed be an eventful year for Brandon Vera and Jessica Craven. From Alliance San Diego to Alliance Philippines, they have come full circle and they are finally home.  /ra