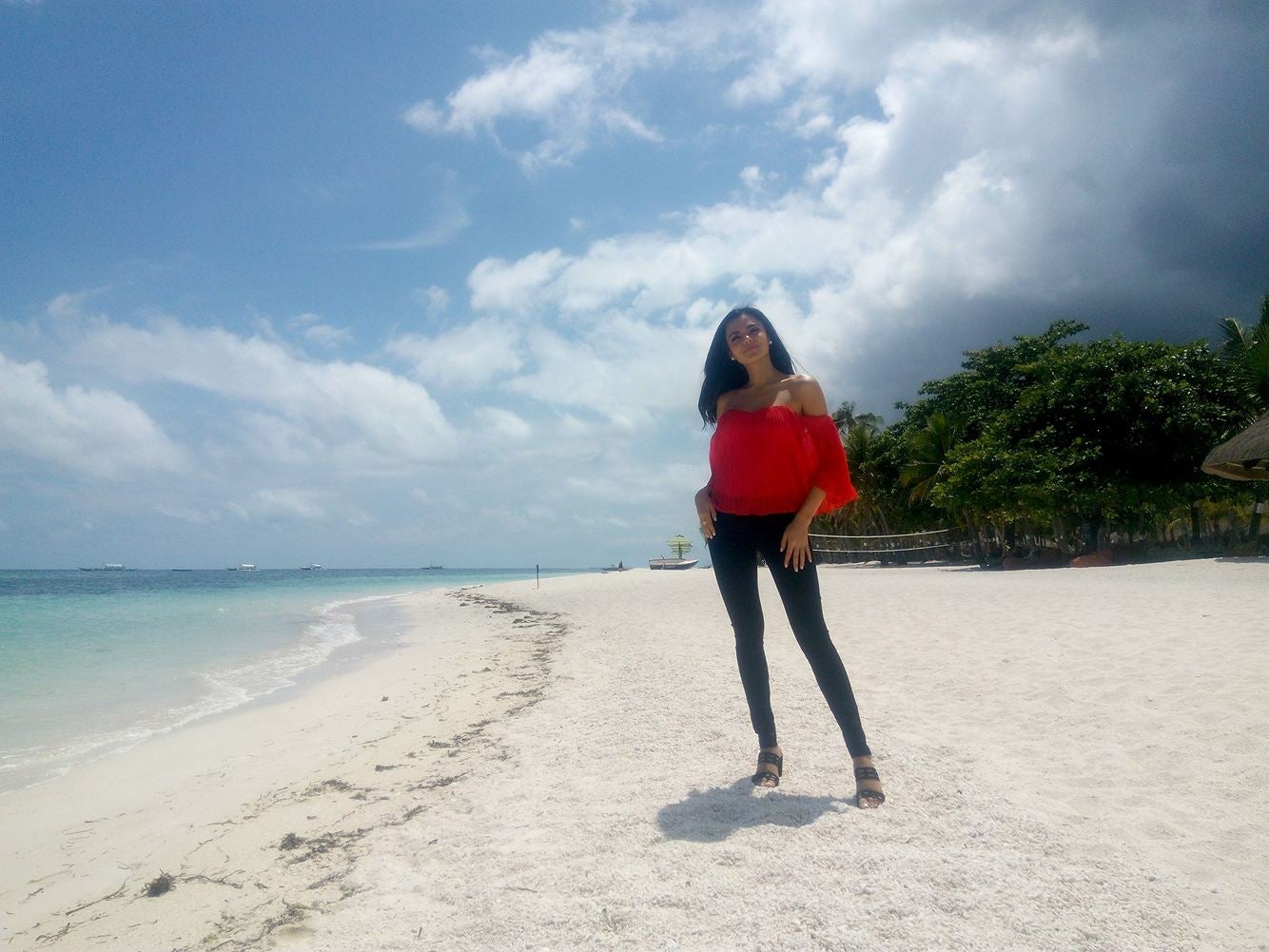 Bb. Pilipinas-Intercontinental 2018 Karen Gallman visited Panglao Island on Wednesday to see the stretch of powdered white sandy beaches of the island which is facing environmental issues. The Bohol native beauty queen wants the island to be preserved and protected. Leo Udtohan/Inquirer Visayas

“It is such a beautiful place. And it will be so sad to see [it] go to ruins,” said Gallman, 25, and a native of Bohol. “So, we should definitely do our best to preserve it and look after it. We need really to take care of Panglao so that it doesn’t go to ruins.”

The Department of Environment and Natural Resources (DENR) earlier identified the lack of waste water treatment facility and “bottomless” septic tanks as among the problems contributing to the environmental woes of the island.

The latest report of the Environmental Management Bureau (EMB), of the DENR, said the fecal coliform on Panglao Island was above the standard.

Gallman visited Panglao last Wednesday as part of her activities for her first homecoming to Bohol after winning Bb. Pilipinas Intercontinental 2018 last March.

“I always look forward to visit Bohol. It’s home for me,” she told the Inquirer.

She also met Bishop Alberto Uy and Bishop Emeritus Leonardo Medroso of the Diocese of Tagbilaran and some priests at the Immaculate Heart of Mary Seminary.

Gallman went to her hometown in Ubay, about 124 km from here, and was welcomed by local officials headed by Mayor Constantino Reyes and members of the Rotary Club of Ubay.

A motorcade was held where residents had the chance to see the first Ubayanon to win a national beauty pageant.

Residents lined up the streets chanting “Karen, Karen,” as she waved and greeted the people.

Gallman, who was crowned Miss Ubay 2007, was born on Sept. 27, 1992 to Gavin William Gallman, a retired Australian soldier, and Ubay native Editha Bayonas.

She first joined Binibining Pilipinas in 2012 at the age of 19 and made it to the top 12 of the beauty pageant and was also named Miss Photogenic of the batch.

Before trying her luck again in 2018, Gallman worked as an operations analyst in a London company for two years.

“I was born here in Ubay, Bohol. I grew up with seven siblings. My house was in Bood, Ubay. And then I went to Bood Elementary School (during) Grade 1 (and) Grade 2, and then I migrated to Australia at age 8. So, I have basically raised in Bohol. Then pabalik balik nalang ko diri (I just come back here every now and then),” she said.

She said her 60-year old mother Editha trained them to speak Visayan and embrace the Boholano way even if they were living in Brisbane, Australia.
Editha said her daughter is “independent, buotan nga anak” whose big dream was to become a beauty queen.

Next month, she will begin her training for the Miss Intercontinental 2018 pageant to be held in December.