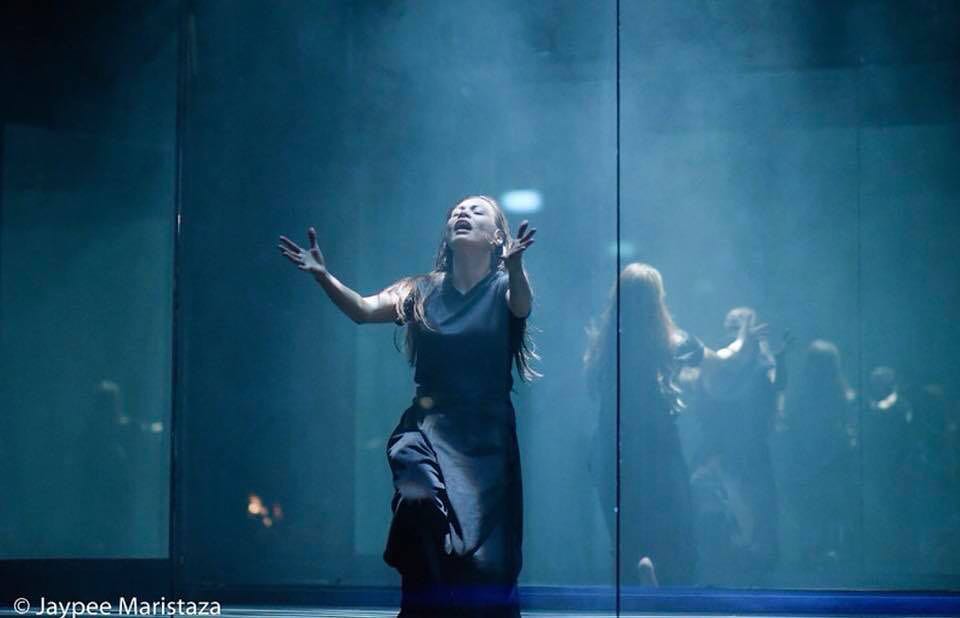 Reviewing my intake of theater in the past three months, one could not but note the somber and conflicted themes that dominated the quarter. It was quite a bumper crop of story lines where social factors crossed with personal crises and choices to produce wrenching human dramas.

(An exception that proved the rule: Tanghalang Pilipino’s “Nang Dalawin ng Pag-ibig Si Juan Tamad,” a whimsically entertaining, if rather slight take on Filipino folktale characters, though one could see even this as a commentary on power-tripping among the exalted that preys on the common folk.)

A notable feature of the scene was the prevalence of stellar female roles in almost every play taken in, largely overshadowing their male counterparts (where these were even present), in the process affording us a superb gallery of outstanding performances by leading (and supporting) ladies. It may simply be coincidental that this is touted to be the Year of the Woman, but this promises to be a central theme to the season.

“RD3RD,” directed by Anton Juan and Ricardo Abad and drawing on veteran performers from a range of theater groups, was structured around an essay about the resonance of Richard III’s rise to tyranny to the current political dispensation. It employed an audacious deconstruction of Shakespeare’s play, along with vivid staging and performances, to hammer home its political points about various sectors of the populace acting to “enable,” in their several ways, the tyrant’s triumph.

It was a provocative and arresting production, though the didactic framework, which tended to be explanatory to a fault, could stand some modulation. While obviously Richard III (Teroy Guzman) was the central character, it was the women characters (I include here co-director Abad as the Duchess of York) who were given the honor of providing, at the end, the sole note of defiance against the triumphant tyrant.

The conjunction of the personal and the political (in a looser sense) was also dramatized in an astonishing string of stellar productions, all revolving around superb roles for their women characters.

“Himala,” produced by Sandbox Collective and 9 Works Theatrical, was simply magnificent—the staging, the music, the performances, the direction (by Ed Lacson Jr).

Having watched the original film and the original stage musical, I was prepared to be underwhelmed, but found myself totally entranced by the dramatic and thematic complexity that built up to one emotional climax after another. Vincent de Jesus’ music was hauntingly integral to the progress of the play, and virtually every role, down to the minor townfolk, was acted excellently.

I have to note, in particular, Bituin Escalante as the mother and Kakki Teodoro as Nimia, but the ultimate star was Aicelle Santos’ Elsa, whole even when broken: her cri de coeur at heaven’s abandonment was almost unbearable.

And beyond the individual roles was the spectacular ensemble who gave the village of Cupang a flesh-and-blood reality with all the pressures for power, pleasure, money, faith: a society in miniature. I dare say it’s premature, but a prime candidate for Musical of the Year!

Dulaang UP’s “Ang Dalagita’y ‘Sang Bagay Na Di-buo,” directed by Jose Estrella, was a harrowing tour de force about a girl whose induction into sexual abuse by an uncle (counterpointed by a different form of abuse by an oppressive mother) puts her on a path of self-destruction.

It was an amazing nearly-two-hour one-woman performance, where the performer had to act out not only the girl in various life-stages (from the womb!), but the mother, the uncle, a deathbed brother, any number of anonymous sex partners, and sundry minor roles. Staggeringly demanding, the role was alternately tackled by Missy Maramara, Opaline Santos, and Skyzx Labastilla—and I watched all three.

The first time, the impact of play and performance was dazzling and bewildering; subsequent viewings gave opportunity to take in a better appreciation of the nuances and complexities of both play and performance. Unforgivingly grim material, but the production, with its bare stage, eloquent lighting and evocative off-stage sounds, captured the horror of the forces that bore down on the ultimately powerless victim.

After the previous two plays, Repertory Philippines’s “Silent Sky” felt positively genteel—a lovely production, with intelligent script (sometimes dauntingly so: it dealt, after all, with the worlds of physics and astronomy), elegant stage design, sensitive direction by Joy Virata, and beautifully understated acting performances by the five-person cast.

Yet, in its own quiet way, it spoke to the struggles of even privileged and competent women against the strictures and conventional mores of their own, presumably enlightened milieus. Cathy Azanza-Dy was superb in the lead role, combining strength and vulnerability, backed up by a trio of other women with their own distinctive, even contradictory, métiers.

Peta’s “‘night, Mother,” directed by Melvin Lee, was (perhaps surprisingly, given the theater company’s activist bent) the most purely personal of the plays this quarter.

As dark and conflicted as any of the others, its struggle, which goes on unrelentingly for an hour and a half, was almost entirely focused on two ostensibly self-possessed but vulnerable women in a life-or-death contest over the inevitability of a suicide choice. (I confess to some discomfort over the psychological plausibility of the storyline, perhaps due to the effort to adapt it to a Philippine milieu.)

Such external factors that impinged on this struggle—the absent husband/father, the problematic son, the nature of medical disabilities—seemed almost incidental. But this didn’t lessen the epic nature of the contest, and the two actresses gave spectacular performances: Eugene Domingo and, even more, Sherry Lara, whose portrayal of the mother was an epitome of contained tragedy.